Quiet Firing Is the Worst Trend of 2022 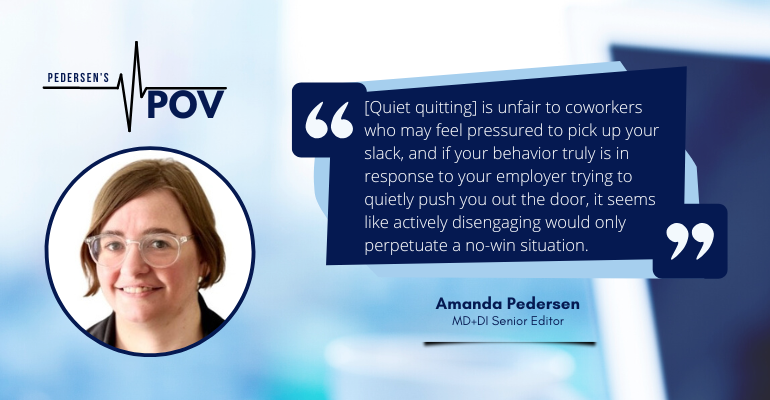 The past year has given birth to several workforce-related trends, such as the Great Resignation, Great Medtech CEO Reshuffle, and even a phenomenon dubbed quiet quitting. But a recent Harvard Business Review article sheds light on what is perhaps the worst trend corporate America has seen yet in 2022: quiet firing.

Noting that outright layoffs are expensive and risky, Ayalla Ruvio and Forrest Morgeson write in the HBR article that some companies have turned to quiet firing, or intentionally creating a hostile work environment that encourages people to leave “voluntarily.” Their research sheds light on how employees can tell if they’re being quietly fired, including changes to work responsibilities, compensation, and communication, and even offers counter strategies for workers who think they may be victims of this quiet firing trend.

Unfortunately, one of these recommended counter strategies is quiet quitting, which is almost as bad as quiet firing. Quiet quitting, in case you're wondering, is disengaging from your work and only doing the bare minimum. This is unfair to coworkers who may feel pressured to pick up your slack, and if your behavior truly is in response to your employer trying to quietly push you out the door, it seems like actively disengaging would only perpetuate a no-win situation.

And now, as we're beginning to see medtech companies pull the layoff trigger, I can't help but wonder if quiet firing is happening in medtech as well. Nobody likes layoffs, but at least it's a more honorable tactic than just treating your employees like garbage in hopes that they get fed up enough to quit. It should also be pointed out that neither quiet quitting nor quiet firing are actually new in the corporate world, we just didn't have a catchy name for them before.

As I noticed that quiet firing was trending on LinkedIn I perused some of the commentary, which was almost as enlightening as the HBR article on the topic itself.

Some LinkedIn members described situations in which these tactics were used to phase out older employees, which of course is blatant age discrimination, like what this person describes:

"They were doing some of the craziest things centered towards older employees. In my case, I had a work project that I was expert at. Once it went away, that's when they started on me. I had an excellent work history, but suddenly, I was nitpicked on my performance reviews and even accused of things that happened, that I had nothing to do with. This led to me getting zero raises the last few years I was there, but I did retire on my terms, not kicked out, like what happened to others."

"Quiet firing, they tried but I was not quiet and everyone knew I was being fired that day. I told my coworkers I was going to be fired and I told them why. I refused to quit, I waited until the cowards worked up the nerve to fire me."

Of course, there are often two sides to every one of these stories, and the truth is usually buried somewhere in the middle of the two.

Another LinkedIn member, who identifies as a leadership/executive coach, had this to say:

"Not a good look for organizations to do this. In this social media driven world, an organization needs to uphold its image and brand in the community. Though it may appear an organization is saving money by quiet firing it's employees, the long-term cost of attracting and keeping talent is far greater. The best option is to be transparent with the staff, communicate, and offer transition/outplacement services ..."

Another LinkedIn member, who also appears to be in the business of career/leadership coaching, had this to say about quiet firing:

"Supervisor communication is critical to a successful career path. If you suspect something is off, it probably is. It may be wrong, but it happens when supervisors are incompetent, threatened, or want to avoid a lawsuit or protracted dismissal. It's easier and cheaper for the organization to make you quit. The good news is I've seen many people turn it around by outlasting their lousy boss, getting HR to assist in clarifying their role, or moving to a better position. It takes strategy, but with the right support, you can get your career back on track."

Reflecting on my own past career, I can't help but identify with at least some of the warning signs Ruvio and Morgeson identified in their article, but until now I've always just chalked those experiences up to horrible management. It never occurred to me that it might have been a subtle way of showing me and others at the company the door.

While we're on the subject of dispicable workplace environments, I'll share this experience from a newspaper job that seems like a different lifetime ago. The publisher seemed to view reporters (particularly female reporters) as objects rather than human beings. This, and other hostile behavior from the publisher, led to my decision to leave. I submitted my letter of resignation, providing two weeks notice. About 11 days later, I found separation papers on my desk stating I had "quit with no notice."

Given that I was still at my desk, working my tail off to tie up loose ends, and had even volunteered to work the upcoming holiday weekend (ironically, Labor Day was to be my final day), I was confused. I politely asked the HR person for an explanation and correction to this "no notice" statement, and was told the company didn't count weekends or holidays, regardless of whether I actually worked those days. Seeing that the company was not going to amend my separation papers to reflect that I did, in fact, provide a two week notice, I stood up and demonstrated what quitting with no notice actually looks like.

Pedersen's POV publishes every Monday. If there’s a topic you would like her to consider, email [email protected] (please put “POV” in the subject line).