Are the Baxter Divestiture Rumors True? 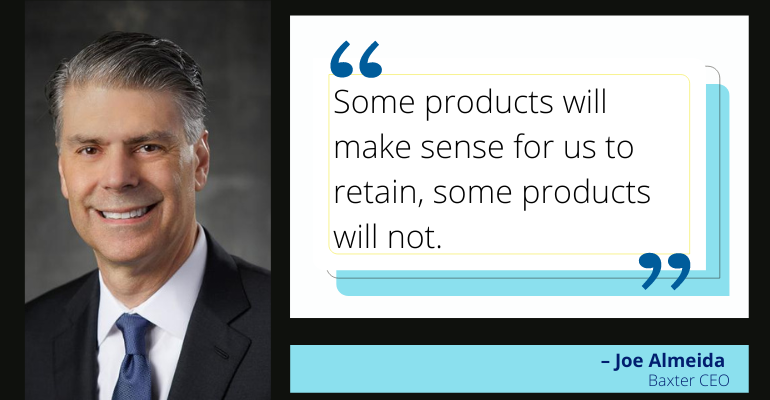 Baxter is rumored to be considering selling all or parts of its dialysis business.

Baxter CEO Joe Almeida confirmed Thursday that the company is in the midst of evaluating its business portfolio, and he expects to make an announcement related to that process in January.

There have been rumors circulating for about a month now that the Deerfield, IL-based company is considering shedding parts of its dialysis businesses. That rumor emerged just a few months after Medtronic and DaVita revealed plans to form a new kidney-focused medical device company, and about six months after news broke of a three-way merger in the kidney care space involving Fresenius Health Partners, InterWell health, and Cricket Health.

"I'm not going to comment on the rumors from the market, but I'm going to tell you what we're doing," Almeida told analysts during Baxter's third-quarter earnings call. "We are actively looking at the portfolio of the company."

He said the management team wants to optimize the company's portfolio with a focus on connected care, and areas that will drive higher gross margin, and areas of higher top-line growth. That means software, and technologies designed to "connect the dots" for clinicians and institutions.

He also said the team is about three-quarters of the way through that process, which has been "very intense."

Any decision made regarding a sale of assets or other portfolio movement would take into account shareholder value first and foremost, he said.

Baxter also lowered its earnings forecast for the full year. The company now expects a net loss of $4.2 to $4.45 per share, compared to its previous forecast of a $1.82 to $1.92 loss per share. Like many of its peers in the medical device industry, Baxter has faced supply chain challenges and foreign-exchange headwinds.

The company's quarterly results also included a $3.1 billion impairment charge from its Hillrom acquisition, which closed in December. The company cited rising interest rates and a decline in equity valuation as the reason for the impariment charge. Hillrom contributed $735 million in sales to the combined company in the third quarter.

Baxter paid $10.5 billion for Hillrom, but the assumption of Hillrom's outstanding debt obligations brought the deal value to about $12.5 billion. It was one of the biggest medtech deals of 2021.

Is Baxter Going to Shed Two of its Kidney Care Businesses?
Sep 14, 2022