A Medical Device Machinists’ Creation to Marvel At 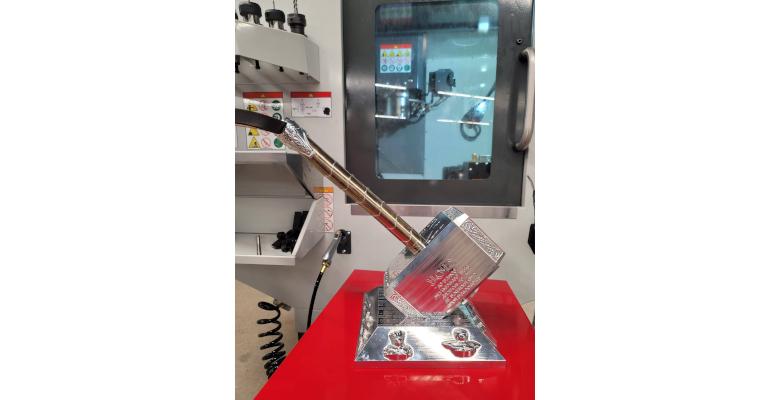 What does Thor’s hammer have to do with medical device manufacturing? Students who just finished a CNC machinist apprenticeship recently found out.

Autocam Medical, a contract manufacturer of components for surgical implants and instruments, has been training the next generation of medical device manufacturing professionals. The company recently presented its fourth class of machinist apprentices with certificates of completion for its CNC Machinist Apprentice Program. Eleven students were honored during a November 10th ceremony at the AMP Lab at Western Michigan University in Grand Rapids.

During the program students were challenged to machine two intricate objects. Two students, Wrindy Hauser and Ethan Richey, machined a Thor’s hammer in the AMP Lab, which is where classes for the apprentice program are held. The students later won a first-place prize in Mastercam’s global Master of CAM Wildest Parts Machining Competition in the Teams Division.

It’s “not necessarily easy to see from afar, but the level of detail and the complexity of the parts that came together to make the hammer has many similarities with devices or customers' requests of us,” John Kennedy, IV, general manager of Autocam Medical, told MD+DI.

Students must complete more than 700 hours of classroom instruction over a period of 90 weeks during the program. Apprentices are employed by Autocam Medical, and they maintain a full work schedule during the training period, the company reported in a news release. In addition to CNC Machinist certification, the course of study also covers the necessary schooling required by the Federal Department of Labor for students to receive a certified Journeyman card and puts them on the path to receive an associate degree, earning 27 college credits, according to the company.

“Our program is quite uncommon. In addition to the specialized training that our students receive, we pay for 100% of their college tuition and provide them with a full-time job while they are receiving training,” said Kristy White, HR director for Autocam Medical, in a news release. “The unique Apprenticeship Program is a key reason the company was named the Grand Rapids Chamber of Commerce’s EPIC Award winner in the Excellence in Business category this year,” she added. 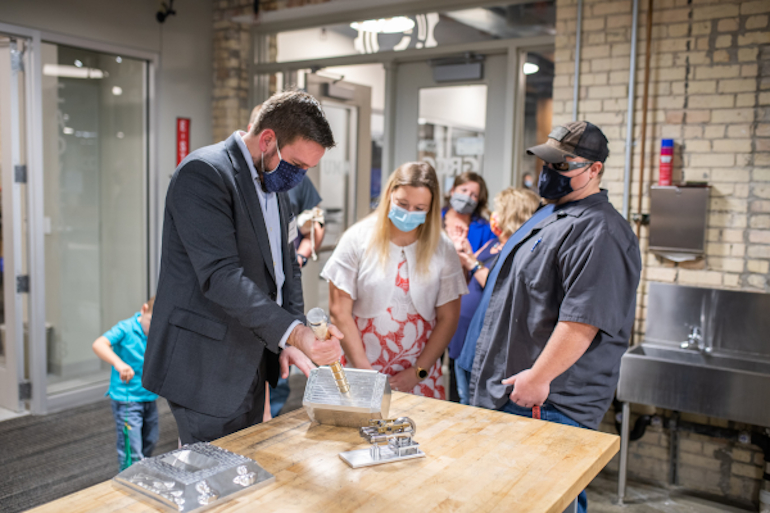 Pictured are John Kennedy, IV, general manager of Autocam Medical, along with student apprentices Wrindy Hauser and Ethan Richey and the Thor's hammer they machined.

Added Grand Rapids Community College instructor Andy Beach in the statement: “Autocam Medical’s Apprentice Program is a win-win; it’s a win for the skilled trades industry and a win for the students. The students gain skills that put them on a career path with unlimited opportunity, and it helps build a ready workforce for the manufacturing industry, which is starving for CNC Machinists.”

Kennedy tells MD+DI that Autocam Medical “continues to see growing demand for complex instrumentation and growing complexity of the instrumentation we are being asked to provide. We see this continuing to drive demand for CNC Machining.”

Autocam Medical itself is growing. The company will be expanding its footprint with a new plant in Kentwood and create 250 new jobs. For more details on opportunities for skilled machinists, future apprentices, engineers, or technicians, contact White at kwhite@autocam-medical.com.