HomeMarketsIVDNoninvasive Test for Colon Cancer Screening Offered as an Alternative to Colonoscopy for Screening
Recent
Markets
J&J MedTech Lands Clearance for INHANCE Shoulder System
May 19, 2022
The Robot Will Do Your Angioplasty Now
May 18, 2022
XACT Is Changing the Tone of Robotics in Healthcare
May 18, 2022
Medtronic Touts Cusp Overlap Technique in TAVR
May 18, 2022 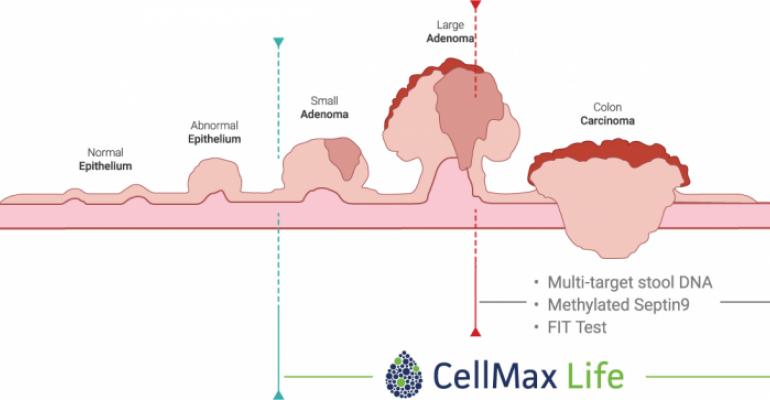 “The only real cure for cancer is finding it early,” said Padma Sundar, vice president of strategy and market access at CellMax Life, in an interview with MD+DI. In terms of colorectal cancer, she said it takes a long time for an adenoma to develop into cancer, so early detection of these adenomas can be lifesaving.

But colonoscopy, although the gold standard of adenoma and colon cancer detection, has issues with patient compliance. There are about 125 million Americans, 45 years old and older, who are advised to have routine screening for colorectal cancer. “Unfortunately, 50 million of these 125 million Americans have never undergone screening and that includes about 20 million people between the ages of 45-50 who have been added to the pool because of the rising incidence of colorectal in younger adults,” Sundar said. “There are another 30 million who have already been recommended to have screening who are over 50 years old, but they just don’t want to use colonoscopy because it’s not convenient. It’s invasive, and it involves bowel prep,” she explained.

Clearly, there is a need for accurate noninvasive screening for adenoma and colorectal cancer. CellMax Life has developed a patented platform called CMx that captures precancerous and cancer cells that are shed into the blood by tumors. The test looks for the cells in whole blood, meaning there is need for pretreatment. “We take two mls of blood from the patient and pass it through a microfluidic chip, which takes 90 minutes,” said Sundar. “As it goes through the chip, we apply proprietary high-affinity antibodies to capture epithelial cells. These antibodies capture six times more epithelial cells than conventional antibodies.”

Surface coating on the microfluidic chip mimics human epithelial cells, which enables cells to pass through the chip without clustering. “It also allows epithelial cells to pass at a specific rate, so those cells are captured, and white blood cells at that flow rate are left behind,” said Sundar.

The test also retains the fragile antibody and cell combination. “There are very few of them, especially in the precancer stage, and you don’t want to lose any of them,” said Sundar. “So we developed a patented air foam release mechanism, which gently releases the cell and antibody combination into a membrane.”

“Finally, we apply yet another antibody, which is specific to cells coming from the colorectal region, and that’s how we know it’s a colorectal cell,” said Sundar. Then it is imaged under a microscope, 16 samples at a time, to detect multiple characteristics including size and number of cells and morphology.

Starting in the second quarter of 2019, the company will be collaborating with Medigen Biotech in a clinical trial of patients with early stage colorectal cancer.

The company will supply a circulating DNA test, as well as the CMx platform, which can be performed at the same time. Six types of analytes, including four classes of genomic alterations, microsatellite instability, and circulating tumor cells can be assessed with one blood draw. “We will use both of tests to detect cancerous and precancerous cells and DNA-based markers. Patients who test positive on either of these tests will be enrolled in the trial,” said Sundar.

The patients will be tested four times during the course of treatment to see how their levels of DNA and tumor cells are changing over time in response to therapy.

CellMax Life hopes to launch CMx as a CLIA test in the first half of next year. It is currently commercially available in Asia for screening.