Can Babson Succeed Where Theranos Failed? 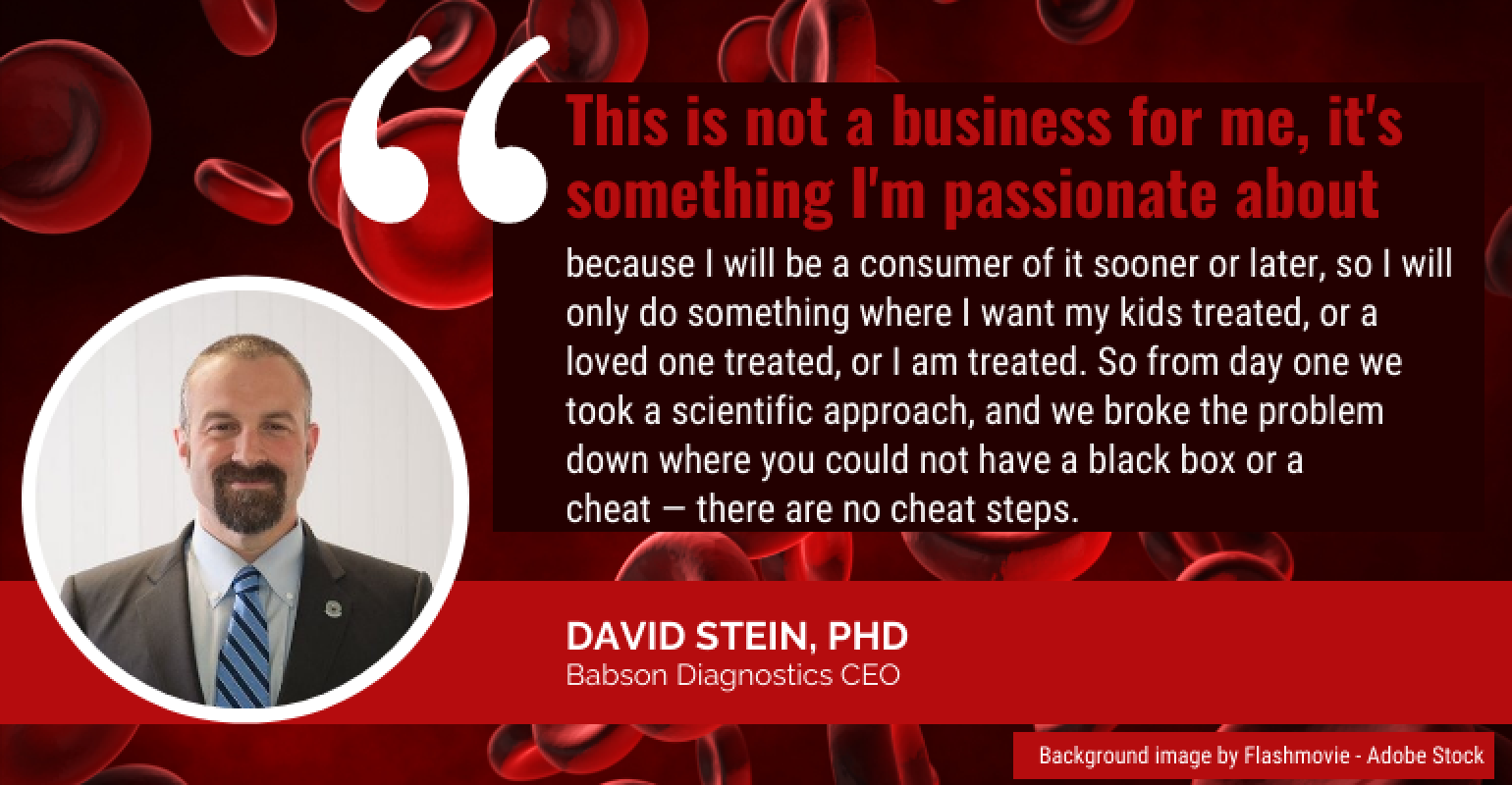 A new diagnostics company is taking a science-first approach to democratizing diagnostic testing to improve access to care. Babson Diagnostics has partnered with BD for sample collection.

Back in 2015, David Stein, PhD, who worked for Siemens Healthineers at the time, was constantly being asked the same question by two different pools of medtech people. Venture capitalist people wondered if they should be investing in Theranos, while the labs of the world were saying, "Holy mama, they're disrupting the market, what do we do?"

Of course, at that time Theranos was still making quite a few waves in the industry as it sought to bring finger-prick diagnostic testing to the masses. Even President Joe Biden (then Vice President) praised Theranos as the laboratory of the future. That was also right before the turning point in Theranos' story when it turned from fairytale to cautionary tale for all of medtech.

"I think we know the story; we know the things they did that none of us think were the right thing to do," Stein told MD+DI. "But what they did do is prove that people want to have their choice, and that people desire the ability to get testing done in convenient locations tied to retail, and they want their time to be respected."

Stein began conversations with a colleague at Siemens, Eric Olson, about ways the company could bring a solution like that to the marketplace. They started working with BD (Becton, Dickinson) on the sample collection end of the new venture and Siemens spun the project out. Olson left Siemens with a term sheet in hand and founded Babson Diagnostics. Siemens spun out licensing exclusivity and a cash investment into Babson, and BD also signed exclusive agreements.

Today, Stein is CEO at Austin, TX-based Babson Diagnostics, working alongside Olson, the company's founder and chief operating officer. The company is focused on moving laboratory testing to the pharmacy counter. The company says it has developed a model for diagnostic blood testing that maintains a high standard of accuracy, yet requires only one-tenth the sample size of traditional venipuncture methods. The company also uses a proprietary blood collection device to collect the sample right there at the pharmacy, then the sample is processed back at Babson's labs.

"You get the best of both worlds of very easy accessibility at retail, very easy for the retailer because they don't have regulatory barriers, very easy for them to collect, coupled with the economies of scale and quality and the menu breadth of a centralized processing lab.

Haven't we seen this movie before?

Given how badly Theranos imploded, the biggest challenge Babson is likely to face is distinguishing itself in a market where investors and retail partners alike have been scorched by a similar business concept. So far though, that doesn't seem to be a problem for Babson.

Last year Babson launched a COVID-19 serology test to detect IgG antibodies to SARS-CoV-2 in the bloodtream through a select network of retail and clinical partners in Austin. Clinical performance evaluation for Babson's IgG assay resulted in 100% sensitivity and 100% specificity. Babson is developing a pipeline of fully automated COVID-19 serology assays, including qualitative and quantitative measurement of the immune response across a number of sample types. Babson’s tests are high-throughput heterogeneous immunoassays analyzed at the company’s CLIA-certified, CAP-accredited, high-complexity clinical laboratory in Austin.

The startup also recently completed a pivotal clinical study called Dandelion Alpha, which demonstrated the effectiveness of Babson's approach. The results are momentous, because they indicate that Babson is the first company to test a full set of routine panels from a small capillary sample and produce accurate, diagnostic-quality results.

The study included 81 people enrolled during a six-week period between September and October 2020 and was conducted in a retail pharmacy. Each study subject received testing from both sample types: traditional venous (collected with a conventional needle and tube from the arm by a professional phlebotomist, and processed and analyzed using conventional laboratory equipment), and novel capillary (collected with BD’s fingertip collection device by a trained retail pharmacy worker, processed with Babson’s sample preparation technology, and analyzed with Babson’s miniaturized assays). Results demonstrate strong correlation between the two testing methods, providing new evidence toward establishing clinical equivalence. The results were reviewed by Babson’s Scientific Advisory Board, which is composed of renowned and award-winning diagnostic experts.

“COVID-19 has put the world’s focus on our healthcare systems, directing us to reexamine how we access care. We believe that reimagining the current clinical diagnostic testing process is an important place to start, as diagnostic blood testing is crucial for preventive care, but can be made more accessible and convenient. Babson is the first company to create a clinical and practical platform that provides accurate diagnostic blood test results for the most ordered routine testing panels from a microsample collected from a finger in an accessible retail environment,” Stein said. “Our team is gratified to see that the data from the Dandelion Alpha study supports our science-first approach and suggests that our sample collection, sample handling, and analysis technology produces the same results as the conventional diagnostic blood testing system without sacrificing menu breadth. It’s a major step toward democratizing diagnostic testing to improve customer access to care.”

One good thing about Theranos is that the disgraced blood-testing company does serve as a learning opportunity for companies like Babson. Stein said the primary lesson he took away from the Theranos story is that there really is a market need for choice and accessibility so that people can get their blood tested when they want, and where they want.

"And maybe the most important thing is, you have to take a scientific approach, a science-first approach," Stein said. "We're dealing with people's lives. This is not a business for me, it's something I'm passionate about because I will be a consumer of it sooner or later, so I will only do something [if it's] where I want my kids treated, or a loved one treated, or I am treated," Stein said. "So from day one we took a scientific approach, and we broke the problem down where you could not have a black box or a cheat — there are no cheat steps."

That's also the reason Babson partnered with BD, a world leader in blood collection, to collect a very high-quality capillary sample, and then the company architected its assays to need about 37% less blood than the traditional traditional venous method, which is how Babson is able to do broad panels of testing from small volumes of blood.

"It's not that we're doing any kind of magic, but we're being very smart," he said. "We're collecting a little bit larger volume of capillary blood, very high quality, we're making sure that we're not wasting the blood, especially when it comes to the separation step for serum, and then on the assay side we need less blood."

Stein said that from just 350 microliters of blood Babson can do a comprehensive metabolic panel, lipids, vitamin D, thyroid-stimulating hormone, and other tests.