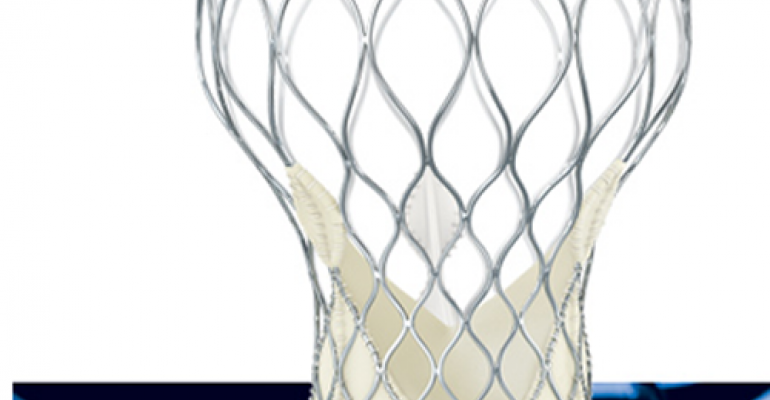 Medtronic and Edwards Lifesciences are proving the safety and effectiveness of TAVR but St. Jude Medical hits a road block.

Analyst reports emerging from the annual meeting of Transcatheter Cardiovascular Therapeutics in Washington D.C. show that leading companies are proving that TAVR is a safe and effective approach to treat severe aortic stenosis.

Those include data from both Medtronic and Edwards Lifesciences, the only two companies that have approved transcatheter aortic valve replacement products in the U.S. But St. Jude Medical, which is testing its Portico TAVR product in a U.S. pivotal trial, seems to have hit a speed bump.

The company confirmed that it had stopped implanting patients with the Portico TAVR system after imaging data in a small number of cases performed 30 days after the implant in the U.S. pivotal trial showed "reduced valve leaflet mobility," according to Candace Steel Flippin, a St. Jude spokeswoman.

But she added via email that "to date the worldwide [Portico] TAVR adverse event rates remain low and are consistent with event rates cited in the literature."

Which is something that Danielle Antalffy, an analyst with Leerink Partners, highlighted in her TCT commentary while speculating whether the cause of the reduced valve leaflet mobility was a flaw in the actual device or some kind of "artifact from the 4D CT scan" that revealed the anomaly.

"Our sense is that Portico patients have not had unusually negative outcomes -- particularly OUS [outside the U.S.] where the valve has been available for several years now -- which would imply that the second scenario [of the imaging anomaly being an artifact of 4D CT scans] is most likely," she wrote in a research note on Monday.

The St. Jude Medical spokeswoman said it is too early to say how halting implant procedures will affect the regulatory timeline of the product in the U.S. The U.S. pivotal trial was ongoing and the company hasn't filed a submission for Portico's approval with the FDA.

Still, Antalffy said the Minnesota device company will now have to do 4D CT scans of all U.S. patients to get to bottom of the anomaly found in some scans and that will "delay the pivotal trial" a bit. If the root cause is related to the device, then expect a severe delay, she wrote.

In the mean time at TCT, Edwards Lifesciences presented data on the Partner trial, which at 5 years showed that the first-generation Sapien TAVR device had "sustained benefits" among patients who couldn't undergo open heart surgery to repair their diseased valves when compared to patients that underwent standard medical therapy, she wrote. The median survival rate for TAVR patients was nearly three times that of patients who were treated with medical therapy, according to Antalffy.

Medtronic also reported positive data on patients who have extreme risk for undergoing open heart surgery and opted for its CoreValve TAVR system. No patients showed severe paravalvular leak, a major complication of TAVR, at one or two years following the implant procedure. Antalffy wrote.

Both these companies are proving to doctors that TAVR can be a safe and effective therapy for many patients who are at lower risk of open heart surgery, the current standard method of replacing diseased heart valves.