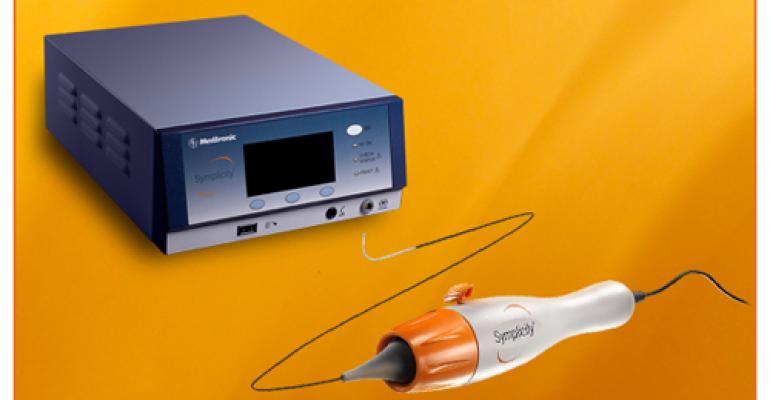 The primary endpoint was a change in blood pressure in patients after six months following the implantation of the Symplicity renal denervation implant, according to Danielle Antalffy, an analyst with healthcare investment bank Leerink Swann. The study had enrolled 535 patients in 87 U.S. medical centers.

“While it's disappointing the trial did not meet its primary efficacy endpoint, this is the most rigorous renal denervation clinical trial conducted to date, and the first of its kind to include a sham-control group. We look forward to advancing these data into the peer-review process and will submit these findings for presentation and scientific discussion at an upcoming scientific congress,” said Dr. George Bakris, M.D., professor of medicine and director of the ASH Comprehensive Hypertension Center at the University of Chicago Medicine, past-president of the American Society of Hypertension, and co-principal investigator of the SYMPLICITY HTN-3 trial.

Given the result, Medtronic said it intends to suspend enrollment of patients in renal denervations in India, U.S. and Japan among other actions. It also said that an independent panel of advisors will be formed to recommend a course of action about the “future of the global hypertension clinical trial program, as well as provide advice on continued physician and patient access to the Symplicity technology in countries with regulatory approvals.”

The fact that the U.S. study has failed was not something analysts expected.

“Today's announcement came as a surprise to us given the highly successful -- albeit much smaller -- HTN-1 and HTN-2 (153 & 106 patients) trials and clinical experience in Europe,” Antalffy of Leerink Swann wrote in a research note Thursday.

She added that it removes a future growth driver for Medtronic that Wall Street analysts had already baked into future projections.

In picking Medtronic as his top stock pick for 2014, Mike Weinstein of JPMorgan Chase had included Symplicity as the reason that the company would do well in the future. His report published Monday shows that he expected a U.S. approval of the product in 2015 saying he had “little doubt” over a future U.S. approval.

“Assuming FDA approval for Symplicity, we expect CMS reimbursement to coincide or come shortly after, so we do see a significant market developing in 2015-2016,” he wrote.

"The outcome is clearly a setback and a surprise for what had been one of Medtronic’s more promising pipeline programs, but because the assumed contribution in Street models was limited ($150M in Fiscal Year 2016 sales), it shouldn’t be enough to derail a growth acceleration story built on pipeline and emerging markets."

That was why the company paid a whopping $800 million to acquire California startup Ardian that developed the Symplicity renal denervation system.

The head-scratching over this development will not be limited to Medtronic alone.

As Glenn Novarro noted, research analyst with RBC Capital Markets noted, Medtronic’s rivals have followed suit to acquire their own renal denervation technologies, although the Minnesota company had a headstart in the U.S. of two to three years.

“While, we don't expect the other players to abandon their programs, we believe the pace of development may be slow down and focus may shift to other technologies,” Novarro wrote.

And that would be quite ironic given that renal denervation for hypertension - where an implanted device delivers mild electrical pulses to the renal artery to control high blood pressure that does not respond to multiple drugs - has been hailed as an exciting new technology with the potential to change the lives of many.