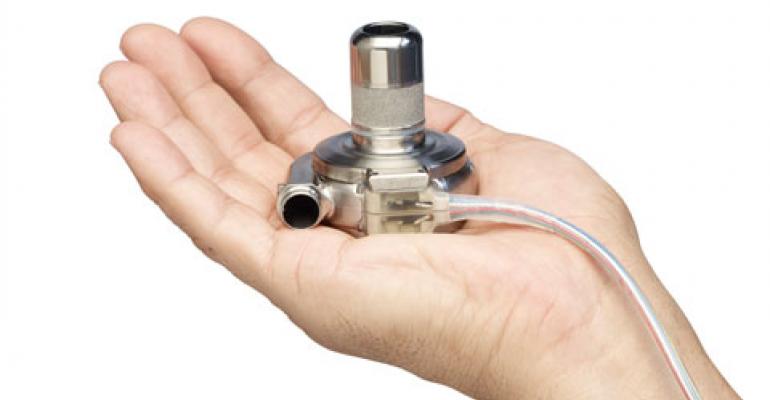 HeartWare's HVAD left ventricular assist device for heart failure showed non-inferiority in stroke-free survival, but a significantly higher rate of strokes in the first cohort of the device's trial for a destination therapy indication.

The HeartWare HVAD is being studied in a destination therapy trial for heart failure patients.

HeartWare Inc., makers of the HVAD left ventricular assist device, announced Thursday that it had achieved the primary endpoint in the first patient cohort of its ENDURANCE destination therapy trial.

HVAD, which is used to treat heart failure patients, showed 55.0% stroke-free survival at two years while the control arm, patients implanted with Thoratec Corp.'s HeartMate II device, had 57.4% stroke-free survival over the same time period. This rate was enough for HVAD to show statistical non-inferiority (p=0.0060) and hit the trial's primary endpoint.

The results were presented at the annual meeting of The International Society for Heart and Lung Transplantation in Nice, France. The data was from the first cohort of a two-cohort trial HeartWare is conducting to try to gain FDA approval for a destination therapy (DT) indication with HVAD. DT patients live the rest of their lives on LVAD therapy, unlike bridge-to-transplant patients, who eventually expect to receive a heart transplant.

HVAD patients exhibited a higher stroke rate than the HeartMate II control group. However, Joseph Rogers MD, a co-principal investigator for the trial and senior vice chief for clinical affairs in the Division of Cardiology and Mechanical Circulatory Support Program at Duke University, said during a lunch presentation on the results that HVAD stroke patients actually had less severe strokes than patients in the control arm. In neurologic injury measurements of the stroke patients at six months, the same proportion of patients in each arm had a 0 Rankin score, showing no impairment from the stroke, Rogers explained.

This tendency for HVAD patients to have non-disabling strokes is important, not only because it helped HeartWare achieve non-inferiority in the stroke-free survival primary endpoint (this included only disabling strokes), but also because physicians weigh the risk of adverse events with each device before deciding which one to implant. While the HVAD showed a higher stroke rate, the control HeartMate II arm showed a higher rate of device malfunctions requiring exchange or transplant.

The ENDURANCE trial is not over yet. A second cohort continues to enroll after being started in October 2013 to investigate the impact of tightly controlling patients' mean arterial pressure (MAP) on stroke incidence. This second cohort was proposed after early observations from the trial pointed to fewer neurological events at hospitals that closely managed MAP. Results from the first cohort showed that MAP was the strongest predictor of neurologic events and that patients with lower MAP had reduced risk of both ischemic and hemorrhagic stroke.

Sean Lavin, an analyst at BTIG, wrote in a research note Thursday morning that in early conversations with doctors after the data presentation, "most docs with whom we chatted did not seem concerned about the stroke data relying on their own experience where they have seen fewer strokes (most docs have too few numbers to pick up a difference.)"

Doug Godshall, president and chief executive officer of HeartWare, said in a news release, "Attaining the primary endpoint in this first cohort is encouraging, yet we view it as our core mission to continually improve patient outcomes with the HeartWare System. Just as we made enhancements to the device and implant procedure during the ENDURANCE enrollment period of 2010 to 2012, we are similarly making improvements to patient management and look forward to confirming the benefits of more consistent blood pressure monitoring in the second cohort of our destination therapy trial which is nearing full enrollment."

Another change during the first cohort was the addition of sintering to the HVAD's inflow cannula. Sintering involves adding miniscule beads of titanium to the titanium surface of the inflow cannula; this is thought to help tissue ingrowth. FDA allowed the sintered HVAD to be used in the trial starting in April 2011. About 200 patients received the sintered HVAD in the first cohort and of these patients, 57.5% reached the primary endpoint of stroke free survival at two years.

HeartWare announced Thursday that enrollment in the second cohort is more than 80% complete and should be fully enrolled by mid-2015. The primary endpoint of this cohort is change in stroke incidence at 12 months on the original device. HeartWare expects to submit a premarket approval application to FDA in 2016 for a DT indication for HVAD.