FDA Files Consent Decree Against Medtronic and its CEO 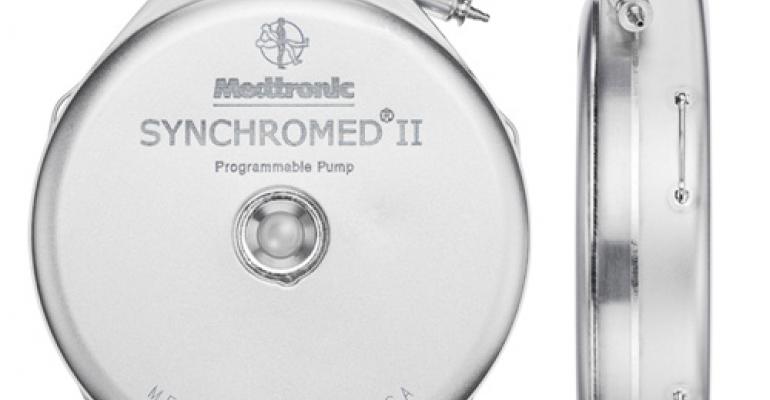 FDA files a consent decree against Medtronic, its CEO and Neuromodulation unit president for repeatedly failing to correct violations related to manufacturing of the SynchroMed II Infusion Pump.

And yet it is this neuromodulation unit of Medtronic that has landed the Irish medtech company in hot water with the FDA. On Monday, the federal agency announced that it has filed a consent decree against Medtronic, it's CEO Omar Ishrak, and the president of the neuromodulation unit, Thomas Tefft, for repeatedly failing to correct violations.

The agency charges that the violations relate to the manufacturing of the SynchroMed II Implantable Infusion Pump Systems that deliver drugs via a programmable implantable device to treat primary or metastatic cancer, chronic pain and severe spasticity. The devices are manufactured at the company's neuromodulation facilities located in Columbia Heights, Minnesota.

Until the matter is resolved, Medtronic cannot legally manufacture and sell the new SynchroMed II Implantable Infusion Pump Systems unless a physician determines that it is medically necessary for a patient, the FDA announcement states.

The agency first approved the Synchromed II Implantable Infusion Pump Systems in 2004. Two years later FDA first identified problems with how they were being manufactured. Such problems can lead to over- or under-infusion, or a delay in patient therapy.

"Medtronic has been working under a Warning Letter for some time now in Neuromodulation (issued August 2012), and it seems that things were just taking too long for the FDA," wrote Joanne Wuensch, an analyst with BMO Capital Markets in a research note on Monday.

The company will be required to hire an independent expert who can help to develop and submit plans for correcting the problems. Wuensch noted that Medtronic has already agreed with FDA on design changes to the SynchroMed device, improvements to its quality system, and ways to keep the device available to physicians should they deem it necessary.

"Efforts are well underway to address issues included in the consent decree and we will continue our work to implement design changes to the SynchroMed drug infusion pump and enhance the Neuromodulation quality system," Resman wrote. "We are committed to working collaboratively with the FDA to address their expectations in a timely and thorough manner."

The SynchroMed device accounts for less than 1% of Medtronic's overall sales, according to Wuensch, the analyst with BMO Capital Markets. In fiscal 2015, which will end on April 30, sales of the device are estimated to be $306 million worldwide with $204 million expected to come from U.S. sales.