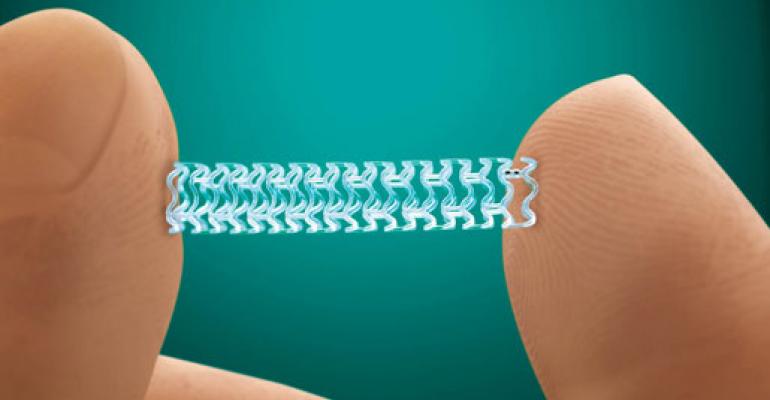 FDA approves Abbott&#39;s Absorb, making it the first fully-dissolving coronary stent in the United States. How will the product impact care?

Absorb, Abbott's coronary stent system made to fully dissolve in the patient's body, has finally been approved by FDA. The agency's nod comes as the device is already available in more than 100 countries, according to a company press release.

The structure of the Absorb GT1 Bioresorbable Vascular Scaffold (BVS) System is made of poly(L-lactide), a biodegradable polymer that dissolves over about three years, leaving the patient's artery free of permanent implants except for four tiny platinum markers in the artery walls denoting placement, according to an FDA press release. But despite its pioneering role, some analysts do not think this version of the product will enjoy broad market adoption.

As MD+DI reported back in March, Absorb was noninferior to Xience on the clinical endpoint of target lesion failure at one year, but FDA asked an advisory panel to review numerically higher data on device thrombosis, target vessel myocardial infarction, and a potential link between these events and vessel diameter size.
In a research note published following the March FDA advisory panel meeting on Absorb, Wells Fargo senior analyst Larry Biegelsen wrote, "While we expect FDA to approve Absorb later this year, we do not expect the product to capture significant share given its shortcomings (e.g., difficult to use, numerically worse outcomes vs Xience, higher rates of stent thrombosis) . . . In the U.S., we estimate Absorb will capture about 5% of the total DES (drug-eluting stent) market although our estimate may prove conservative if the post-approval data and experience with Absorb improves." Xience is Abbott's stent that elutes everolimus, the same drug used in Absorb.
Still, more than 150,000 people have been treated with Absorb and the device may be ideal for many. Gregg Stone, MD, FACC, FSCAI, chairman of the ABSORB clinical trial program and director of cardiovascular research and education at the Center for Interventional Vascular Therapy at Columbia University Medical, said in the release, "No metal means the treated artery can pulse and flex naturally as demands on the heart change with everyda activities. No metal may also reduce the potential of future blockages that occur with permanent metallic stents, and allows easier access to other treatment options should they prove necessary in the patient's future."
FDA approved Boston Scientific's Synergy bioabsorbable polymer DES in October 2015. While not fully-dissolvable, the drug coating and polymer used to elute the drug are fully absorbed around three months. Synergy has had a successful U.S. launch, with Boston Scientific management stating that the device is expected to make up about half of the company's U.S. drug-eluting stent sales by the end of this year.
Abbott executives told that FDA advisory panel that the first phase of the company's U.S. Absorb launch will include 500 patients at 100 sites. In phase 2, this will grow to 150+ sites and 2000+ patients; phase 3 would bring 300+ sites around the country.
"The Absorb bioresorbable stent treats coronary artery disease without committing people to a permanent metal implant--giving them peace of mind and helping them get back to their daily lives without the concern of having a permanent metallic impalnt. We're very excited to bring the promise of Absorb to patients in the United States," Deepak Nath, PhD, senior vice president of vascular at Abbott, said in the company release.