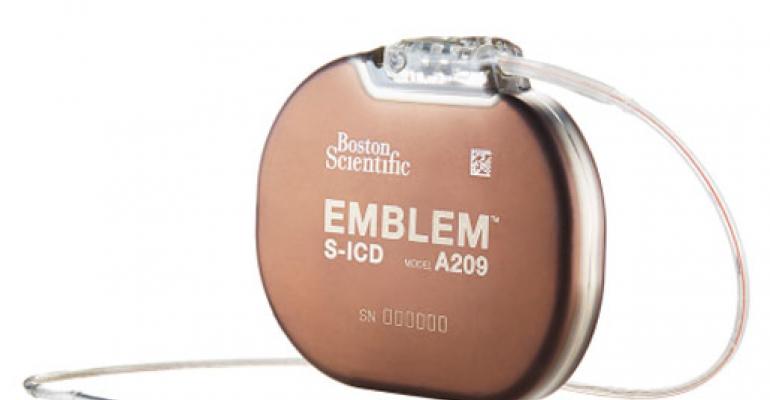 How does the MR-conditional version of Boston Scientific&#39;s Emblem S-ICD fit into the company&#39;s plans for its cardiac rhythm management product portfolio?

In addition, the Emblem MRI S-ICD adds on two more new capabilities--the SMART Pass technology to ensure defibrillation therapy is administered only when needed, and the AF Monitor element to inform clinicians about episodes of atrial fibrillation. SMART Pass is available to already-implanted Emblem S-ICD Systems via a software update. This week's FDA approval means S-ICD patients will also be able to go through full-body 1.5 T MR scans under specified conditions.

Kenneth Stein, MD, chief medical officer of Rhythm Management at Boston Scientific, said in a press release, "Now with FDA approval, patients receiving the Emblem MRI S-ICD System, as well as patients who previously were implanted with an Emblemn S-ICD System, have reassurance they can safely undergo MR scans while remaining protected from cardiac arrest."

These advances should impact future Boston Scientific products too. As reported previously by MD+DI, the S-ICD is a key component of Boston Scientific's in-development leadless pacemaker, Empower. The leadless pacer will be a modular system able to work along or in tandem with the S-ICD. This would allow patients who need both defibrillation and pacing therapy options that do not require transvenous leads. Speaking with MD+DI earlier this year, Stein said he told an FDA advisory panel considering leadless pacers that Empower might be used in three various situations--S-ICD patients who later need pacing, a leadless pacer patient who later needs defibrillation, and patients who might need both devices placed at the same time.

The Emblem MRI S-ICD gained CE Mark in April and the company began its European launch in June. During the company's second quarter earnings call in July, Stein said, "[We] really couldn't be more pleased with what we've seen in terms of uptake of the Emblem MRI where it's been launched in Europe and the existing Emblem device in the U.S. and globally," according to a Seeking Alpha transcript of the earnings call.

This approval adds to Boston Scientific's MR-conditional product portfolio. FDA has already approved its Accolade MRI, Essentio MRI, and Ingevity MRI pacing leads, part of the ImageReady MR-Conditional Pacing System. There is more to come--the company is trying to earn MRI labeling for its approved ICDs and cardiac resynchronization therapy systems (CRT-Ds). The protocol for a U.S. trial, called ENABLE MRI, is being revised for patient screening and eligibility. That revision has pushed the timeline for potential FDA approval of MRI labeling to the end of 2017.