HomeMarketsGeneral HospitalPaper Device Aims to Make a Big Impact
Recent
Markets
The Robot Will Do Your Angioplasty Now
May 18, 2022
XACT Is Changing the Tone of Robotics in Healthcare
May 18, 2022
Medtronic Touts Cusp Overlap Technique in TAVR
May 18, 2022
Feds Crack Down on Reused Rectal Probes
May 18, 2022 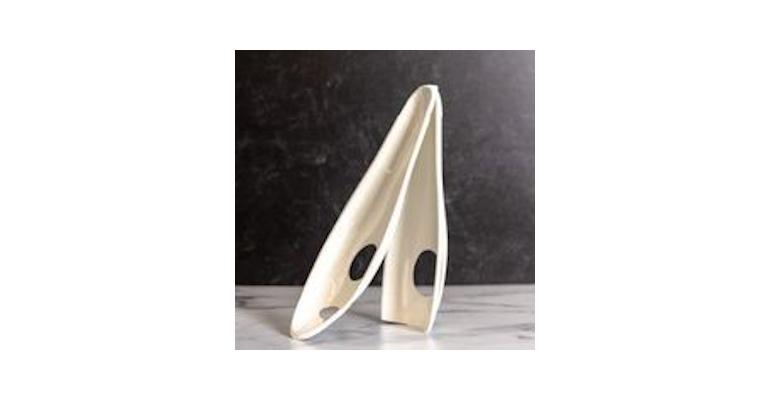 Eco・pí is a clamshell-style hinged tray shaped like a funnel made using paperboard material.
The award-winning eco・pí Urine Sample Collector seeks to solve a common problem in a sustainable way.

As a former pharmaceutical sales rep, Abbi Jones routinely visited OB/GYN practices. But after becoming an expectant mother herself and speaking with the office staff over time, she came to realize that every woman struggles with collecting a urine sample in a cup.

“I really thought it was just me,” she said, “but the office staff told me they spend most of the day cleaning up. It’s extremely difficult for women to hit the cup, and especially challenging when you add pregnancy or obesity.”

Jones set out to develop an alternative, but she wanted to do more than deliver a user-friendly solution. She also wanted a sustainable one. The result is the eco・pí Urine Sample Collector, for which her company MedPaper and her manufacturing partner, Graphic Packaging International (GPI), won a Judges’ Award in The Paperboard Packaging Council’s 2021 design competition.

Eco・pí is a clamshell-style hinged tray shaped like a funnel featuring a two-ply design that holds a sample cup in place and also acts as a hygienic handle. Tray performance is enhanced with a thin lamination of PET film that increased stiffness and moisture. It is made using paperboard material from sustainably managed renewable forests strategically located near the paper mills.

Jones said she came up with the idea for a funnel and, after a patent search, she found that virtually the only other collection alternative was the “nun’s cap” specimen container.

“It takes up a lot of space in storage and waste,” Jones said. “So I wanted to use paper.”

After a phone call to GPI, Jones and her company MedPaper met with Chuck Tarlton, GPI’s director of new product development.

GPI’s expertise in paperboard trays was important, as “paper is hard to work with,” Jones explained. “It’s malleable, and it tears, so kudos to their team.”

She explains that eco・pí is designed so that urine runs through a top hole and funnels into any existing cup used by the lab or clinic. She noticed that every office seemed to use a different cup, and some rural locations would even use a Dixie cup.

Such flexibility “is least disruptive,” she said. “Changing behavior is tricky, even if the solution is better. The smaller the change, the better, so we just decided to make it easy so they can use whatever cup they prefer. It has to be easy to use, or people won’t use it.”

Jones explained the reasoning behind the PET coating: “The poly layer enables the paper to be stretched into shape, and we also needed to ensure that no paper particles get into the sample, so the poly acts as a barrier. Importantly, eco・pí remains sustainable/renewable even with the thin poly layer.”

Despite the use of some recycled paperboard, eco・pí is white for a medical appeal and looks “clean,” she added. Offices are already purchasing eco・pí as a nonsterile item, and her team is finalizing sterile packaging designs using paper for validation sometime this year. GPI has also designed a dispenser for multipackaging.

Jones and her idea have already come a long way, but the last couple years unfolded a little differently than she expected. Not long after obtaining her first round of funding, the pandemic hit. “No one wanted to talk about urine cups during the pandemic,” she recalled. She used the time to do a lot of trademark work and research potential markets. “I found out it would also be needed in pediatrics and in assisted living,” she said.

Her team also trialed eco・pí “all over” and gathered user feedback. “A mom told me it helped her daughter in the ER. They didn’t need to cath her, and it helped get a sample,” she said.

Jones added that she has also been told that eco・pí has made urine collection easier for both clinics and patients. “There is less cleaning, and there is no need for women to wait to drink more water if they’ve had difficulty in giving a sample.” She’s also hopeful that eco・pí can reduce the overall need for catheterization to collect a sample.

“It’s been an incredible journey, and I’m excited for the award,” Jones said.

“I want to change the world in the medical field. Plastic has its place, but this application is one that can use paper.” She adds that she isn’t knocking the “nun’s cap—it has a place for measuring urine.”

But for urine collection, she says, “there is a huge need, and I intend to fill it.”