Robert Califf, MD, faced some tough questions during a Senate committee confirmation hearing about how he would handle medical device and drug regulation as FDA chief. 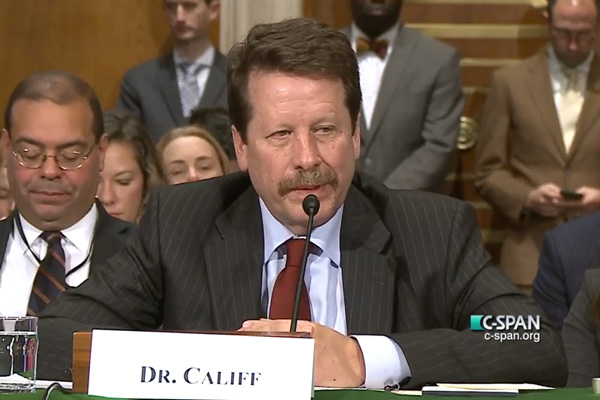 While Califf stated he would work to streamline medical product approvals, some Senators raised
questions about his industry ties. Image from C-Span.

Robert Califf, President Obama's pick to head the FDA, received mostly warm support from the Senate panel during his Tuesday confirmation hearing, until he was asked about such thorny issues such as the duodenoscope superbug outbreaks, the high costs of drugs, and his ties to the pharmaceutical industry.

Sen. Patty Murray (D-WA) questioned FDA's handling of superbug outbreaks stemming from duodenoscopes, some of which occurred in her home state of Washington. "We need to make significant improvements in how FDA monitors medical devices on the market to identify safety issues more quickly and prevent the tragedies we have seen with this," she said, before asking Califf how he would improve post-market surveillance of devices.

"I think we need to really work on our post-market surveillance of devices, and I hope you'll help us with this," Califf said, holding up the FDA's Sentinel Initiative as a success story for managing drug-related adverse events. "We have 170 million Americans' claim data so when we have a problem, we can look it up almost in real time. We need the same system on the device side. We have plans to do that, but we are going to have to work together with you on how to fund it and how to fold it in with that Sentinel system," he said. "Imagine with these duodenoscopes, if there had been such a system, we would have seen the problem very early," Califf explained without making specific mention of the MAUDE database, the current method for tracking adverse events related to medical devices.

The FDA nominee did not comment on FDA's use of the MAUDE database to discover that the 510(k) modifications to previously FDA cleared duodenoscopes possibly caused infections. FDA requires that any modifications to a previously cleared or approved device that can significantly impact safety and effectiveness to be documented in a new 510(k) submission. This discovery led to the new requirements of the device manufacturer to provide more stringent proof that the modified device can be "cleaned properly." In addition, one of the devices implicated in the superbug outbreaks had not received 510(k) clearance.

A Reuters article states that, between 2013 and 2014,135 total patients were harmed from duodenoscopes, but FDA acknowledged that this figure was likely an underestimate because not all healthcare facilities submit such reports.

Some of the most critical questions during the confirmation hearing came from HELP committee member and presidential candidate Sen. Bernie Sanders (D-VT), who questioned Califf's ties to the pharmaceutical industry, and told Califf that he would not vote for him. "We need a commissioner who's going to stand up to the industry--you are not that person," Sanders stated.

Califf, a cardiologist who is now 64, also received pointed questions from Sen. Elizabeth Warren (D-MA), who expressed concern that the FDA under Califf might lower its regulatory standards for medical products. "I've never been a proponent of lowering standards for anything," Califf replied. "That doesn't mean we couldn't be potentially quicker... Americans depend on safe drugs and devices that are also effective."

Warren mentioned that she would not vote to nominate Califf until she had read through the research contracts with industry he had signed while working at Duke University, which involved both drug and device companies. "Seventy percent of the studies we wanted to do we couldn't because companies were unwilling to grant that right," Califf said.

Califf has extensive experience managing clinical trials while he worked at Duke University, where he oversaw the Duke Clinical Research Institute, which was largely funded by industry. "It's no secret that during your time at Duke you received significant compensation," from pharmaceutical companies, Warren stated. "It naturally raises questions about your relationships with the drug industry."

A recent article by Califf that was published in the European Heart Journal listed financial support from more than 20 companies. During the nomination process, Califf recused himself from connections from a number of healthcare companies to avoid potential conflicts of interest.

Califf noted that Duke University had an independent voice in coming to conclusions in doing industry-funded drug trials. The industry also did not have any say in hiding less-than-favorable results. "100% of the studies I have been involved with have been published and are available in the private record," Califf said.

Sen. Richard Burr (R-NC) and John Hardy Isakson (R-GA) commented on the large number of guidance documents--some 150 in all, observing that some of the documents were still in draft form. Califf agreed and was anxious to move forward from the draft form of the documents to the final version, which is a template for industry to follow, but not to replace the federal regulations.

Califf noted that as commissioner, he would bolster FDA's staff to enable it to better respond to a quickly changing medical technology landscape. He responded to a question from Sen. Sheldon Whitehouse (D-RI) about combination products, Califf noted that he would like to create a new regulatory pathway for such products, saying that he hopes that a proposal for such a pathway could be created within a year.

One such combination product approved by FDA is the Infuse Bone Graft/LT-Cage lumbar tapered fusion device, which has been the subject of shareholder lawsuits, a RICO suit brought by an insurance company, Department of Justice investigations, and thousands of personal injury lawsuits.

While Califf's industry ties may not have influenced his review of the clinical trials he oversaw, such is not the case in other circumstances, according to a 2012 Senate Finance Committee report. The report revealed that surgeon-investigators had been paid over $200 million dollars by Medtronic to conduct studies involving the off-label use of the Infuse Bone Graft component--studies that the Senate report found to have been edited by Medtronic employees.

Conflicts of interests are bound to arise with industry-sponsored studies, but according to RREE transparency and managing those conflicts through disclosure can reduce risk of reporting bias and research misconduct. The hearing did not go into detail to address how such conflicts might have been a more appropriate line of questioning from members of the HELP committee.

In the end, Califf had a majority of the committee in favor of his nomination, citing his stellar track record of drug development and testing in clinical drug trials, but when asked about the tracking of adverse events on devices, he said little about the current system in place--the MAUDE database.

Much of the questioning from Senators acknowledged the difficulty in striking a balance between the FDA being overly cautious, thus curbing investment, or being overly permissive, potentially making it difficult for the agency to guarantee the safety and efficacy of the products under its purview.