Will This Wearable Device Kill the Computer Mouse? 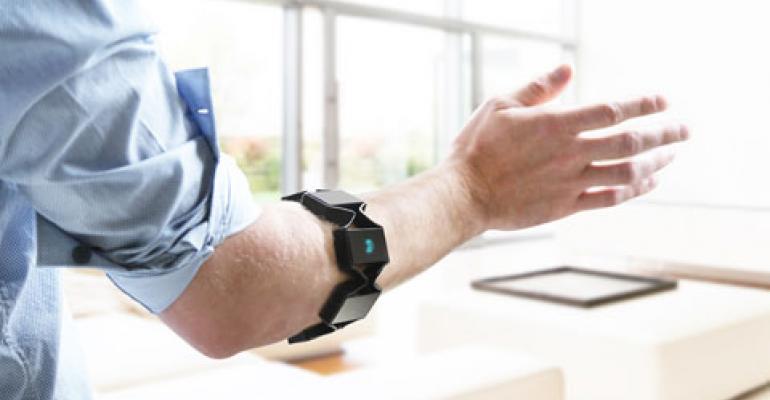 The first computer mouse debuted in the late 1960s, and for years surprisingly little changed in terms of how most people interfaced with computers.

Now, Canadian startup Thalmic Labs hopes to disrupt the paradigm of human-computer interaction (HCI) with Myo, a wearable device that enables users to control computers, phones, and other digital technologies through hand gestures.

The device, which is worn on the upper forearm, uses EMG sensors, an accelerometer, a magnetometer, and an inertial measurement unit with a gyroscope to detect movements such as fist clenching, finger tapping, and hand waving. It communicates with a computer or other device via Bluetooth Smart to translate those movements into commands to, say, advance a slide in a PowerPoint presentation or underline text on the screen.

While there have been other relatively recent advances in HCI, such as touch interfaces, camera-based gesture control (e.g., Microsoft Kinect), and voice command (e.g., Apple’s Siri), Thalmic Labs cofounder and CEO and cofounder Stephen Lake said Myo can be used in instances in which those other options don’t make sense.

The device allows users to control a computer or phone without requiring them to physically touch a screen, keyboard, or mouse. In contrast to voice control, Myo can also be used in noisy environments or when it might not be practical or desirable to speak commands out loud. And unlike other gesture-based interfaces, it enables users to move around instead of remaining positioned in front of a camera. Myo also plays well with technologies such as smart glasses, with which the device can be paired to offer touchless control of a heads-up display.

“We have a great partner that’s based out of Spain that’s actually integrated this into the operating room for surgeons,” Lake told an audience at the recent SXSW Interactive conference in Austin, TX. “They’re using this to enable surgeons to interact with the images around them on the monitors in the operating room while they’re scrubbed in. If they have preoperative CT scans or MRI scans or 3-D images, they can actually go through and zoom in and do things like that while they’re operating without needing to scrub out or ask someone else to go in and do whatever they need to do there.”

He said developers are also using the device’s open API to leverage Myo for stroke rehabilitation.

“Often a problem with stroke patients is learning how to control the muscles and those neural pathways, so you actually use a device similar to this that would pick up muscle activity and provide audible feedback or visual feedback . . . to help them train to move in a proper way again, so [Myo] can be used with that,” Lake said.

He came up with the idea for Myo as an undergraduate engineering student at the University of Waterloo. After participating in a co-op program during which he worked on controls for a surgical robot with the German space agency DLR, he embarked on a capstone design project to build a device to help people suffering from blindness navigate the world.

The fruit of that labor was the Electronic Aid for the Visually Impaired (EAVI), a belt that combined computer vision to recognize faces and signs with a laser scanner from a vacuum cleaner and sensors to deliver tactile feedback based on the environment. When the user walked down a hallway, for example, the belt delivered pressure on both sides.

“That got me interested in this idea that if that merger of humans and technology could do something for the disabled, . . . what could you do for everyone else?” Lake said. “Could you give people, in a sense, superpowers?”

Myo is compatible with Windows, Mac, iOS, and Android devices, and its built-in rechargeable litium-ion battery can run for 24 hours on a single charge. The Myo Market, currently in beta, features connectors for applications such as PowerPoint, Spotify, Netflix, Apple Maps, and a number of popular console and computer games, and there’s also a portal for developers who want to create apps for use with the device. Myo is priced at $199, and is available in both black and white versions through Thalmic Labs’s Web site and on Amazon.