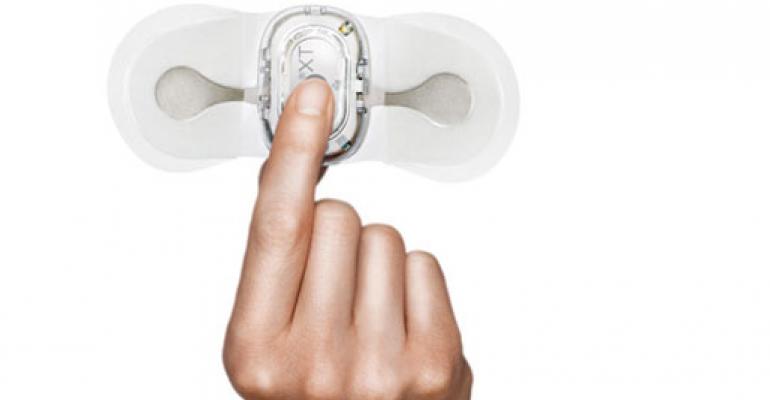 Though iRhythm's product, the ZIO XT Patch, combines two buzzy technologies—remote monitoring and a wearable—the company has proved itself more than just a passing fad. The ZIO XT Service, which includes a sensor that can be worn for up to 14 days, a patient symptom entry system, analysis by an algorithm, and a report provided by certified technicians, had been prescribed to almost 400,000 patients, as of a November 2015 press release.

In an interview earlier this month, iRhythm's CEO Kevin King pointed out that with nearly five million patients receiving ambulatory monitoring each year in the United States, "There's still a lot for us to do here." King said that the company has made solid strides in recent years and has expanded payer coverage to 290 million covered lives. He explained that his team has also focused on growing its contracts with insurance companies and expects to increase in-network, contracted lives. "We have in-network, contracted lives of about 165 million . . . It is, in our view, more a matter of time," he said. (Read more about the ZIO XT Service in MD+DI's 2014 profile on iRhythm).

While there is plenty of room for the ZIO XT Service to continue penetrating the existing ambulatory monitoring market, iRhythm is also eyeing future applications such as asymptomatic patients at high-risk for atrial fibrillation (afib), patients in the perioperative environment, and patients with cryptogenic stroke. While the asymptomatic opportunity will likely take at least five years to reach, King said indications like perioperative monitoring and cryptogenic stroke may come sooner.

Patients who are prescribed ambulatory monitoring today are mainly symptomatic patients. These patients present to their doctor with complaints of dizziness, loss of consciousness, and/or palpitations. King said that some clinicians and payers have expressed interest in studying the ZIO XT technology in asymptomatic patients at high-risk for afib. These patients might have risk factors like diabetes, thyroid disease, high blood pressure, sleep apnea, or chronic lung disease, but do not show afib symptoms. King said that some data points to as many as slightly more than 3 million such patients in the United States. It is important to identify these patients, because if someone has afib, they have more than five times the risk of suffering a stroke, according to the American Heart Association. And a stroke can often be fatal.

King pointed to a pilot study of this asymptomatic patient group that the company funded. The study results were published by Mintu Turakhia, MD, MAS, assistant professor of cardiovascular medicine at the Palo Alto Veterans Affairs Health Care System in the May 2015 issue of Clinical Cardiology. The 75 patients enrolled in the study were all male and were 55 years or older, with at least two risk factors: coronary disease, heart failure, high blood pressure, sleep apnea, and diabetes. These men had never suffered a prior stroke, transient ischemic attack, or afib, did not have a pacemaker or ICD implanted, and had not had palpitations or syncope in the last year.

These patients wore ZIO for up to 14 days. Of the 75 patients, afib was found in 4 patients (5.3%) and a combined diagnostic yield of sustained atrial tachycardia/afib of 11%. Turakhia et al wrote, "Outpatient extended ECG screening for asymptomatic AF is feasible, with AF identified in 1 in 20 subjects and sustained AT/AF identified in 1 in 9 subjects, respectively . . . If confirmed in a larger study, primary screening for AF could have a significant impact on public health."

That larger study is underway. Scripps Translational Science Institute (STSI) is partnering with Aetna's Innovation Labs and Healthagen Outcomes units and Janssen Pharmaceuticals, Inc. to run the mHealth Screening To Prevent Strokes (mSToPS) study. According to a press release, mSToPS will enroll up to 2100 patients for ZIO XT monitoring and another 4000 patients in the comparator arm. Patients will be identified as possibly having a higher risk of afib from their health claims data. ZIO XT patients will wear the sensor for the first 14 days and last 14 days of the four-month monitoring period. A subset of about 250 patients will also wear the Amiigo wristband during the entire four months, according to the trial description on ClinicalTrials.gov.

If the study's findings are compelling, it's possible that patients considered high risk for afib may eventually be told by health insurers that they can receive ZIO XT monitoring at regular time periods as a risk-assessment tool. "[mSToPS] is a study that we think over the course of the next few years, if successful, could change the standard of care for asymptomatic high-risk patients," said King.