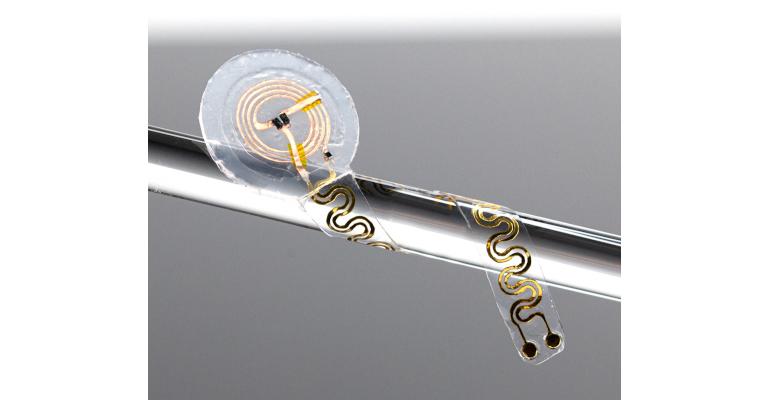 Researchers at The Ohio State University have developed a “smart necklace” that can be worn around the neck to measure a person’s glucose levels using biomarkers from sweat excreted when he or she exercises.
A sensor fashioned into jewelry can potentially be used as a non-invasive way to measure glucose and other vital signs.

Jewelry of the future may be used not only as a fashion accessory, but also to monitor aspects of a person’s health, thanks to new research from The Ohio State University. Researchers there have developed a device that can be worn around the neck to monitor a person’s glucose levels from sweat excreted when he or she exercises, they said. It could one day be used as a way to help people with diabetes to keep track of their blood sugar without painful pin pricks, they said. The so-called “smart necklace” includes a typical clasp and pendant, but also features a battery-free, wireless biochemical sensor that researchers used to measure test subjects’ blood sugar through their perspiration, they said.

“Sweat actually contains hundreds of biomarkers that can reveal very important information about our health status,” Jinghua Li, assistant professor of materials science and engineering at Ohio State, stated in an article in Ohio State News. “The next generation of biosensors will be so highly bio-intuitive and non-invasive that we’ll be able to detect key information contained in a person’s body fluids.”

Indeed, scientists are finding human perspiration a useful natural component for novel wearable-device design. A research team from Penn State University already has used sweat to measure glucose with the development of a non-invasive patch-like sensor made with a nickel-gold alloy.

While the smart necklace designed by the Ohio State team doesn’t use sweat to power the device, it does work without a battery by using a resonance circuit, which reflects radio frequency signals sent out by an external reader system for power, researchers said. The sensor is made of lightweight, ultra-thin materials that give it flexibility and also includes a protective layer that shields both the device and someone’s skin, they said.

Researchers tested the necklace on study participants who engaged in indoor cycling for 30 minutes and then took a 15-minute break in which they drank sugar-sweetened beverages before getting back to the bikes.

The results of the sensor demonstrated that it could pick up the rise in glucose levels that resulted from drinking the sweet beverages, which scientists believe is promising for its potential to pick up other chemical biomarkers in sweat as well, researchers said. Moreover, the device didn’t need much sweat to measure participants’ blood sugar, they said.

Researchers reported the results of their study in a paper in the journal Science Advances.

The team will continue to work on the smart necklace to create a viable commercial product, researchers said. It’s even possible that future, more miniaturized iterations of the sensor can be integrated into other jewelry, such as earrings, or even implantable devices, Li said. “We hope that eventually these sensors can be seamlessly integrated into our personal belongings,” she said in the article.