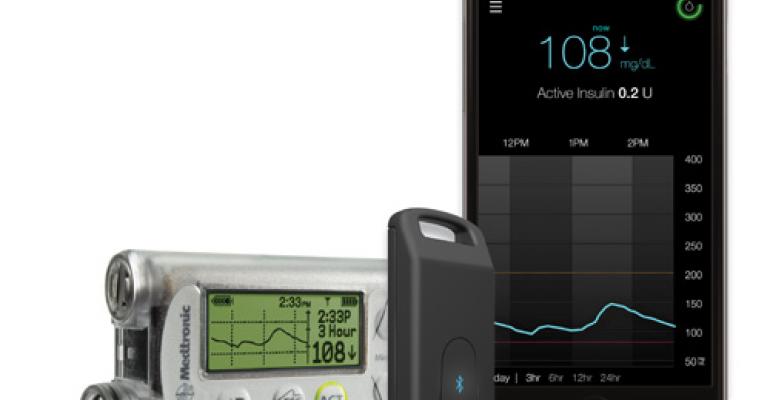 Samsung is developing Android apps for MiniMed Connect, a new device that will allow diabetes patients to discreetly view their Medtronic pump and blood glucose data on smartphones.

On Thursday St. Jude Medical announced that its external chronic pain neurostimulator that can be controlled by the user-friendly iPod Touch -— that makes using the therapy less cumbersome for patients — won CE Mark in Europe.

And 24 hours later, Medtronic has announced a partnership with Samsung whereby the consumer tech heavyweight will develop mobile apps for Android smartphones tied to Medtronic's new FDA-cleared MiniMed Connect device. Until Samsung develops the Android apps, the device will only work within Apple's mobile software ecosystem, as well as through any web browser on a computer.

Both developments underscore how traditional medtech players are looking beyond their wheelhouse to extend their therapy among consumers eager to take control of their health and demanding ease of use while doing so.

MiniMed Connect, which can be placed in a person's keychain or pocket, wirelessly collects data from the insulin pump and continuous glucose monitoring (CGM) device. A related app will allow the diabetes patient to view their blood glucose levels and other related information straight from their smartphone instead of having to check the data from the body worn pump and separate CGM receiver.

What's more the MiniMed Connect system has preset alerts such that if a glucose level is too high or too low, or if an alarm isn't cleared by the patient, automated text messages are sent to the patient's family members and loved ones.

This feature is likely to appeal to parents of young patients who have Type I diabetes, representing the typical user of an insulin pump and continuous glucose monitor. Comprehensive healthcare data is also available to physicians through the daily uploads of historical pump data allowing them to adjust care plans.

MiniMed Connect is compatible with both the MiniMed 530G and the MiniMed Revel pumps that are integrated with a continuous glucose monitoring system. MIniMed Connect will be available in the fall. Another company also allows CGM data to be seen on a smartphone — Dexcom — and though the company doesn't make insulin pumps, it's CGM is integrated with Johnson & Johnson's Animas pump.

In announcing the FDA clearance of the MiniMed Connect device and the partnership with Samsung, Medtronic is aggressively pursuing its slated goal of becoming a holistic diabetes management company. That will fundamentally alter its image of being a maker of pumps and sensors.

"The Connect platform represents how we will use leadership technologies, data and informatics to enable better therapy decision making and care for people with diabetes," said Annette Brüls, vice president and general manager, Diabetes Services and Solutions at Medtronic, in a news release. "Our hope is that this will make it easier for more people to manage their disease and optimize their therapy so they can achieve greater freedom and better health."

In April, the company bought a Dutch diabetic clinic clinic and research center for an undisclosed amount. With this purchase of Diabeter, Medtronic made its debut into the integrated diabetes care model.

Medtronic has announced other partnerships in a bid to own the disease - whereby the company is exposed to different settings in which a diabetic patient is diagnosed, receives care and embarks to manage the chronic condition. In March 2014, health insurer Aetna announced a pilot program by which Medtronic and the insurer would work with doctors to bring insulin pump therapy to 300 insured Aetna members with uncontrolled diabetes. Insulin pump therapy may provide better glucose control for these patients and daily insulin injections.

The program is expected to run for two years. No update is currently available.