ElectroCore Is Changing the Game in Bioelectronics 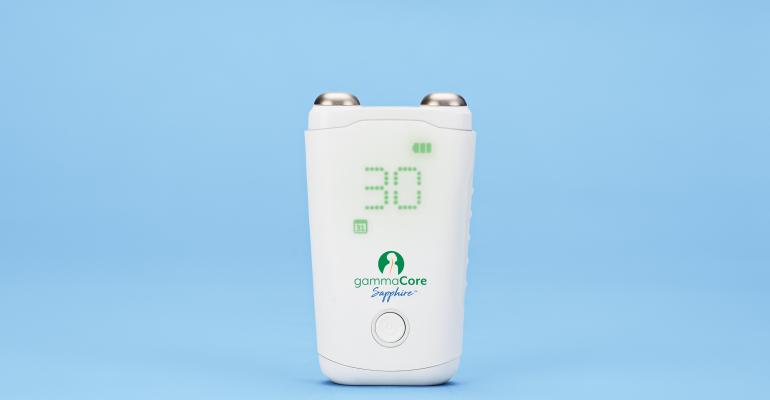 electroCore, a player in the bioelectronic’s market is on a mission to redefine the way patients are treated for migraines. The Basking Ridge, N.J.-based company recently launched the gammaCore Sapphire, a second-generation device that is non-invasive vagus nerve stimulator for the acute treatment of pain associated with migraine and episodic cluster headache.

The gammaCore Sapphire was cleared in December of 2017 but electroCore delayed the product’s launch.

“We were waiting to launch the gammaCore Sapphire after we launched into migraine, which happened on July 1 of this year,” Frank Amato, CEO of electroCore, told MD+DI. “We were trying to time both our broad commercial launch across the U.S. in migraine with the new second-generation device.”

The proceeds from electroCore’s IPO were used to help fund the launch of the product.

“The first-generation device, gammaCore is a product that requires the patients to get a new device each month,” Amato said. “With the second-generation device the patient will acquire the device one time and it has a shelf life of up to three years.”

Each month patients will receive an RFID card, much like a hotel key. The RFID card will be placed against the device and it authorizes the device to work for another 31 days.

ElectroCore’s plans call for it to work toward reimbursement. The firm is even starting to look at other indications outside of migraines, which include applications in neurology and rheumatoid arthritis.

Amato admits that while the company is firmly entrenched in the bioelectronics market, it’s in a league of its own.

“We are breaking the mold in a variety of different areas,” Amato said. “The first of which is how do you treat disease, which has been typically treated with either chemicals or some type of biologic product that is being used to assist patients.”

He added that other companies in the bioelectronics space rely on implanted technology.

Amato said, “the benefit electroCore is ultimately bringing to the marketplace is that it believes the safest way to treat a patient is to do it outside of the body noninvasively, and that it has a business model that requires hundreds of dollars each month of investment, not tens of thousands, which is about what an implant would cost.”

Bioelectronics: A New era in Medical Care Is on the Horizon
Jul 25, 2018