Is Digital Technology Addressing Healthcare Disparities or Widening the Gap? 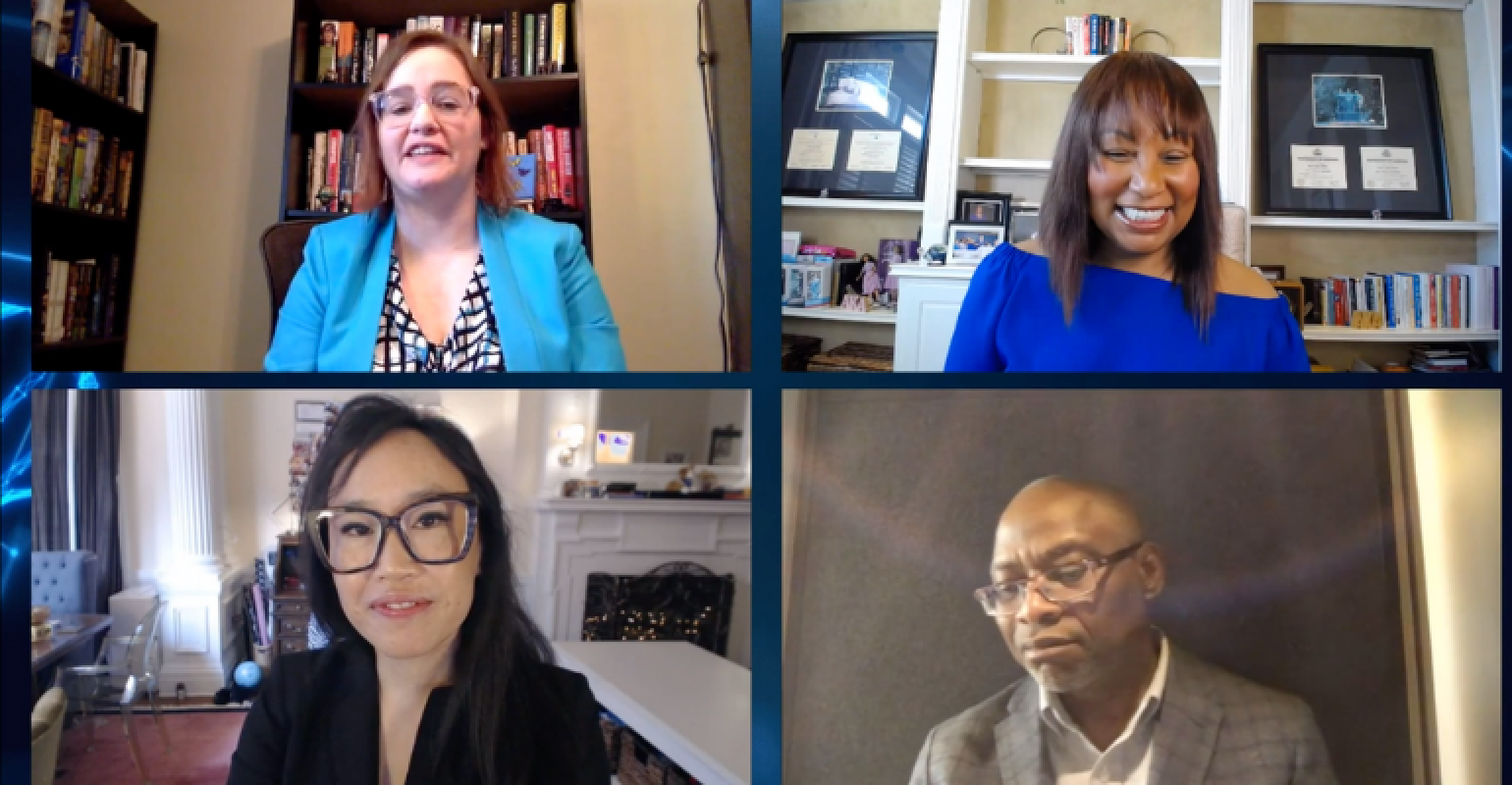 In part 2 of this series, panelists talk about how connected healthcare technologies can be a double-edged sword when it comes to healthcare disparities in America.

Editor's note: This story is the second of a two-part series covering a keynote panel discussion from last week's MD&M BIOMEDigital virtual conference. Part one focused on diversity, engagement, and inclusion (DE&I) efforts in the industry and what successful DE&I initiatives look like. Part two focuses on how emerging technologies have brought greater attention to healthcare disparities.

“Technology has the ability to close healthcare disparities or it could also potentially make it worse. I think we've already seen that with the pandemic,” said Jennifer Joe, MD, a Boston, MA-area physician, medtech entrepreneur, and principal at Vanguard Health (bottom left square in the image above). “We rolled out telemedicine on a grand scale, but we’ve also realized we just ignored certain pieces of telemedicine, which is ‘how do we bring telemedicine to low social economic classes? How do we make telemedicine work for different groups of different cultural backgrounds, different racial backgrounds? Health inequality exists.”

Joe says healthcare innovation is reaching what she calls a “grand inflection point” where multiple digital technologies like artificial intelligence and remote-monitoring are converging to connect patients and healthcare providers. This technological convergence is creating a lot of possibilities that could also help close healthcare disparities – if it’s done right. That means paying attention to product design and making sure developers are measuring how their products impact people across different socioeconomic levels, races, and ethnicities, etc., and making sure the end product is accessible to them. Making sure people who are passionate and well-trained on addressing healthcare disparities are on the R&D team. It’s also important that those are the types of people who are analyzing the data and looking for potential data bias.

“Data is where you can get distracted and say, ‘hey, this data looks like science,’ but data has bias in it,” Joe said. “So I'm very excited about what Johnson and Johnson, and Boston Scientific are doing, and the potential to actually close healthcare disparities.” 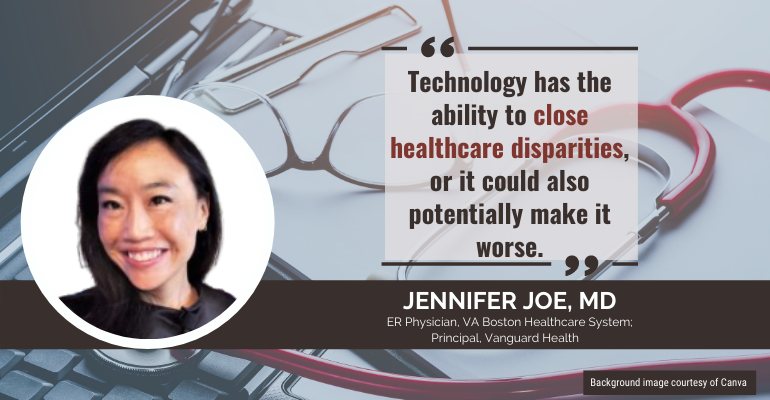 Joe was one of three industry experts who participated in the keynote panel session, "The New Faces of Leadership in Medtech," during MD&M BIOMEDigital last week. Another panelist, Ibraheem Badejo, PhD, senior director of new ventures, at Johnson & Johnson Innovation (bottom right square in the image at the top of this page), pointed out that problems associated with healthcare disparities are not new, but the pandemic has brought greater attention to the issue.

"COVID-19 amplified what’s already been in existence for many years," Badejo said. "For generations, depending on your race, depending on who you knew, you’d get different kinds of treatments in the hospitals, or even from your clinician. In some cases they doubted you even."

This is why companies like Johnson & Johnson (J&J) have made bold commitments to addressing healthcare disparities and closing the gap, he said. This includes making sure clinical trials include representation from different groups of people, both at the patient level and the investigator level.

Last fall Moderna had to pump the breaks on its COVID-19 vaccine trial after realizing that private contractors the company hired to recruit volunteers for its coronavirus vaccine trial failed to enroll enough Black, Latino, and Native American participants to determine how well the vaccine works in these populations, Reuters reported in October.

The fact that Moderna did slow its trial in order to address those limitations does breed optimism that the industry is making progress in the area of healthcare disparaties, however.

"I strongly believe that [gap] is going to be closed," Badejo said, adding that J&J made a deliberate effort in the design of its COVID-19 vaccine trials to include people from various geographical locations and to ensure that people of color are well-represented in its trials.

"We have to be intentional about it, and we have to make a conscience effort to make sure the outcome of our clinical data really reflects the populations that we serve," Badejo said.

Healthcare disparities: Trust has to be earned

There are multiple reasons that people of color — and Black people in particular — are underrepresented in clinical trials. One of the major barriers is a justifiable lack of trust in medical research, which can be traced back to the publicly-funded Tuskegee syphilis study. During the Tuskegee in which researchers withheld adequate treatment from hundreds of Black men in order to study the natural history of the disease. An editorial published last year by the New England Journal of Medicine also suggests that the distrust is far more deeply rooted, "in centuries of well-documented examples of racist exploitation by American physicians and researchers."

Camille Chang Gilmore, chief diversity officer at Boston Scientific (top right square in the image at the top of this page), emphasized the importance of psychological safety, and said that the healthcare industry and medtech companies have to create psychological safety, not just within their own organizations but also within the communities they serve. Last year, Boston Scientific launched a campaign in an effort to fight systemic racism in healthcare. The campaign aimed to racial healthcare disparities for treatment of cardiovascular issues like coronary artery disease, peripheral artery disease, and chronic limb ischemia. That specific campaign fell under the umbrella of the company's 15-year-old Close the Gap program.

"I'll share with you just some interesting facts that we uncovered during our 15-year journey," Gilmore said during the MD&M BIOMEDigital panel session last week. "Fact: Hispanics are about 18% of the U.S. population, yet they represent only 1% of participants in clinical trials. Fact: African Americans, Blacks, are about 12% of the population and have the highest rate of heart disease, but are only in 5% of cardiovascular trials, and in reality, most clinical trials are modeled for white males. Fact: women wait 30% longer to seek cardiovascular care."

The pandemic has created the need for many hospitals to create a post-COVID recovery strategy, Gilmore said, because so many patients in the communities in which they serve lost trust in the system over the past year.

"With Close the Gap, we provide providers and patients with information, reaching the masses to educate them on what non-invasive therapies can do to help create opportunities for you to have a better quality of life," Gilmore said. "One thing I know is that disparities in healthcare goes beyond just the groups facing those disparities, it really does impact the health of the broader population, and results in so many unnecessary expenses. I remember seeing an analysis where disparities amounted to $93 billion in excess medical care costs, and $42 billion in lost productivity per year, and there are even economic losses due to premature deaths."