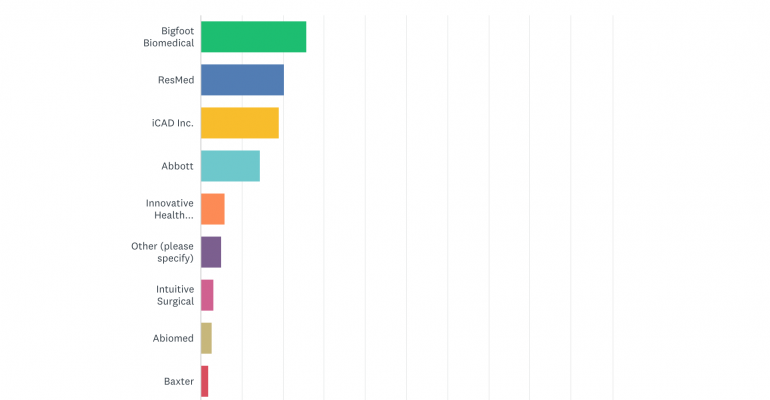 While MD+DI’s editors chose Abbott for its ability to rise above challenges, Bigfoot Biomedical was the favorite among our readership. The Milpitas, CA-based firm is amalgamating other companies’ hardware plus its own software and algorithms to craft an artificial pancreas for patients with diabetes, and readers were impressed by this scrappy startup.

“The hopes of millions of diabetics are waiting on them,” one reader wrote. “They have a personal connection which motivates them product and price-wise[,] and they made a fantastic decision to switch from DexCom to Freestyle Libre as the continuous glucose monitor for their system, delaying the release by going with a superior product. That's what companies who CARE do.”

Many readers also cited Bigfoot’s patient focus as a reason for their choice.

“In the area of diabetes[,] there are many companies working to build this "artificial pancreas." What many of them don't comprehend is that their solutions are not easy for patients and their caregivers to manage. They involve multiple devices and complicated technology. Bigfoot Biomedical is working hard to make their solution easy to use, as well as accurate and dependable.”

While Bigfoot Biomedical was our readers’ first choice for the 2017 Medtech Company of the Year, garnering more than 25% of the vote, the runner-up, nabbing just over 20% of the tally, was ResMed. Respondents lauded the San Diego-based developer of devices to treat sleep apnea, chronic obstructive pulmonary disease, and other chronic respiratory diseases for its embrace of connected care.

“ResMed is the most connected medical device company in the world and is driving patient engagement in their own sleep therapy with patient[-]friendly apps and connectivity,” one respondent wrote.

Coming in at third in our readers’ choice polling, with 19% of the vote, was Nashua, NH-based iCAD Inc., which develops cancer detection and radiation therapy devices.

“iCAD has achieved some significant milestones this year[,] including FDA approval of the first and only concurrent-read AI solution for 3D mammograms,” one reader pointed out.

Around 14.5% of readers agreed with the editors’ choice, with many citing the company’s new blood glucose monitoring solution.

As one reader put it, “Freestyle [L]ibre. Nuff said…”