What Medical Device Inventor Evaded the Nazis at Age 15? 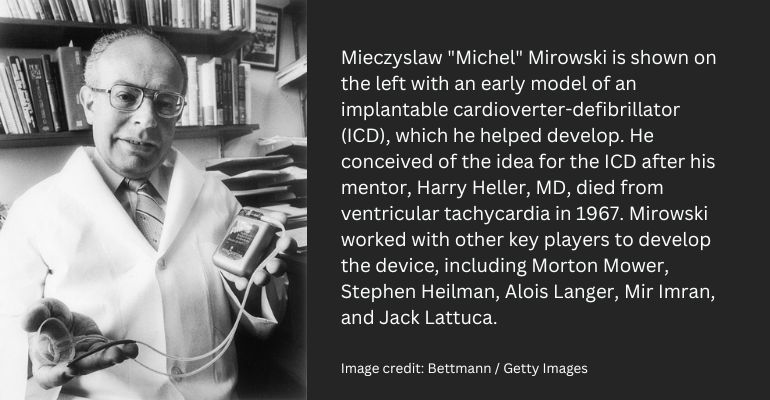 Trivia Tuesday: What life-saving medical device might never have been invented if this man hadn't fled Poland at age 15 when the Nazis invaded in 1939?

The story of how Mieczyslaw "Michel" Mirowski ended up in America where he conceived the idea of an implantable cardioverter-defibrillator (ICD) is almost as incredible as the invention itself.

Mirowski was born in Warsaw, Poland in 1924. He grew up among the large Jewish population of Warsaw at that time, but when the Nazis invaded Poland in 1939, 15-year-old Mirowski left his family and fled to Russia with a friend. He would be the only member of his family to survive World War II, according to a 2010 article in the BC Medical Journal.

Mirowski spent the following five years of the war in the Soviet Union, fleeing the advancing Germans and evading Russian authorities. After the war ended, Mirowski briefly returned to Poland and began medical school in Gdansk before leaving to pursue his medical education in Western Europe. He eventually enter­ed medical school in Lyon, France, in 1947. After graduating from medical school in 1954, he initially worked in Tel Aviv, Israel and then pursued further training in Mexico City, Baltimore, and Staten Island. He returned to Israel in 1963 to set up a private practice in a small community hospital. It was there that he met his mentor, Harry Heller, MD, who died from ventricular tachycardia in 1967. Heller's death became the inspiration for Mirowski's ICD research.

In 1968 Mirowski was recruited to the Sinai Hospital in Baltimore, MD, where he became the director of the hospital’s new coronary care unit and was given protected time for research. There he teamed up with Morton Mower, a junior cardiologist on staff with extensive animal research experience, to begin work on an ICD in July 1969. Only a month later they successfully tested their first crude prototype, made from a broken external defibrillator paddle, on a dog.

Mirowski and Mower faced significant funding hurdles as there was a lot of skepticism in the cardiology community toward the concept of the ICD. The researchers eventually gained support from a pacemaker company in 1970 to further develop the ICD, but two years later the company decided there was no market for the device.

In 1972 Mirowski met Stephen Heilman, a physician and engineer who had formed a small medical equipment company called Medrad, which eventually became a subsidiary of Intec Systems. The partnership resulted in the production of the first ICD prototype small enough to be completely implanted in a dog in 1975. The team further refined the protype and eventually got the greenlight from FDA for the first human implant of the device. That first implant was performed in February 1980 at Johns Hopkins Hospital.

The first ICD model was limited, however, by its bulkiness, the fact that it required a thoracotomy for implantation of the electrode patches, and it was only capable of defibrillation. Mirowski and Mower, along with others in the field, continued to refine and advance the technology and in the late 1980s a catheter-electrode-based model could be implanted without a thoracotomy, much like a pacemaker.

Mower was born and raised in Maryland, the son of a shoe repairman. In his youth he worked as a salesman at his uncle's toy store on the Atlantic City boardwalk. When he was 15, his uncle fell ill and a family physician made frequent house calls to treat him, which in turn inspired Mower to go to Johns Hopkins University and pursue a career in medicine. He graduated from Johns Hopkins in 1955 and from the University of Maryland School of Medicine in 1959. He served in the U.S. Army and then joined Sinai Hospital where he met Mirowski.

Heilman: an inventor at heart

Heilman not only helped Mirowski and Mower develop the first implantable defibrillator, he also is responsible for the first patient-worn automatic external defibrillator. Born in Pennsylvania, Heilman founded Medrad in 1964 to commercialize a device he invented to control the flow of contrast agent during angiography procedures. He later founded Lifecor to commercialize a wearable automated external defibrillator in the form of a vest. Zoll Medical acquired Lifecor in 2006, which later was acquired by Asahi Kasei Group Company.

Medrad hired Alois Langer in 1972 to serve as a project engineer on the ICD team. He specified and designed most of the miniaturized electronic circuits in the device and designed the mechanical package. Given Langer’s experience in electrocardiographic analysis and electrical engineering he was placed as the chief biomedical engineer of the ICD team.

One challenge Langer faced on the project was that the electrode needed to be reliable because it was the connection between the heart and the device that controlled all monitoring and defibrillation capabilities, but it also needed to be safe enough to be implanted into the human body. Langer also had to design a battery that would power the device for several years without failing or causing any immune response in the body.

Mir Imran also played a crucial role in the development of the first ICD.

During a 2014 interview with MD+DI, Mir Imran recalled that when he was a child in India, an uncle would visit in a Model-T Ford, and Imran would have to help crank the car so his uncle could leave.

"The defibrillator story I'm telling you is like the Model-T hand-crank starter," said Imran.

Imran, who has a master's degree in biomedical engineering from Rutgers University, left after three years of medical school to work on the pioneering device with what was then Intec Systems, a subsidiary of Medrad. Eli Lilly acquired Intec in 1985 and later spun it out as Guidant, which was acquired in 2006 by Boston Scientific.

Despite the overwhelming challenges the ICD team faced, Imran said the team's passion for the project kept them going.

"I think what was driving us was the importance of this potential new therapy, that it could become a life saving therapy for millions of people. And it has," Imran said. "We had that recognition back then. That's what drove us to extreme efforts to develop it and put it in human patients."

Publications about the history of the development of the first ICD frequently mention that the team included Jack Lattuca, however the literature doesn't include details about Lattuca's background or his specific contributions to the project.