Vein Finding Can Be Illuminating 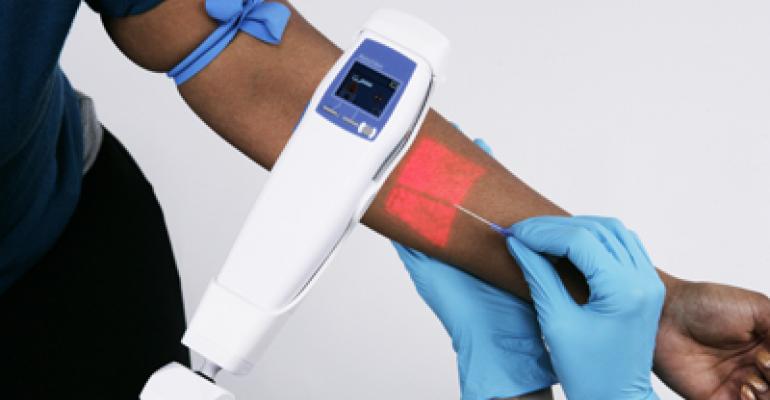 How often have you gone to the lab for a blood panel, only to discover that the medical technician can't find a vein? Several needle sticks later, you wish the lab had access to the AccuVein AV400, a vein illumination system manufactured by AccuVein Inc. (Cold Spring Harbor, NY). Used for locating peripheral vasculature, the system displays a map directly on the skin's surface, enabling doctors and nurses to locate veins for IV starts, blood draws, sclerotherapy, general surgery, and other medical procedures. Selected as a finalist for this year's Medical Design Excellence Awards (MDEA), the AV400 will share the spotlight at this year's award ceremony, held June 19 in conjunction with MD&M East.

The AV400 uses a two-axis optical scanner to sweep an IR laser over a patient's skin, maximizing the contrast between veins and other tissues. At the same time, the device records the reflected light using photodiodes tuned to the IR laser's wavelength. The laser beam illuminates one spot at a time, generating data from a full image over the course of one field. Then, after information about the vein is extracted using digital signal processing, the processed image is reprojected onto the skin using a visible laser. Aligned with the data acquired in the infrared range, the image provides the practitioner with direct and immediate feedback for needle placements.

"With the AV400's high-performance digital technology, the vein image is crisp and clear," remarks Heidi Siegel, AccuVein's director of marketing communications. "The system displays veins that are deeper, wider, and thinner than ever before, and it features an inverse mode that further enhances the visibility of small veins." Portable and lightweight, the device weighs less than 10 oz and is about the same size as a TV remote control. And because it is a noncontact device, it reduces the risk of cross-contamination.

"My vision was to create a vein flashlight," comments Joe Zott, vice president of engineering at AccuVein. "I wanted the device to have one button so that users could point it where they wanted to see veins, and it had to be so easy that anyone could use it." While the first-generation device delivered much of that vision, it also pointed the way toward further improvements--and a host of technical challenges.

The biggest challenge was to eliminate the projection variations that resulted from how the device was positioned over the veins. "Without correcting for these variations, we knew that we didn't have a product," Zott notes. "Thus, the in-house activity to develop a suitable vein-processing algorithm was as critical as the work required to develop the board and the field-programmable gate array (FPGA)." To eliminate projection variations, the unit's signal processing had to be very adaptive, since the available infrared (IR) image changes as the device position changes. And it also had to be fast because any delay would cause a projection lag, causing the user to focus on the device instead of the procedure, Zott adds.

In addition, the device needed to fit a lightweight handheld form factor to ensure better integration into a hospital's work process. And as the company's customers indicated that they wanted more-complete and easy-to-understand images of the vein map, the company developed true two-dimensional signal processing capability and increased the vein visualization depth.

To develop the AccuVein AV400, the company needed a design team that was experienced in deeply embedded real-time signal processing and had a track record of delivering complex solutions in very little time. It also realized that different development teams would have to work in parallel. "Software development started while hardware was still changing," Zott states. "Feedback control and signal processing algorithms were being developed in parallel with the hardware and software."

Since the AV400 was AccuVein's first FPGA-based project, the company required experienced partners that didn't need to learn the engineering ropes and could focus on the design project itself. Thus, Zietlow Design (Piedmont, CA) had medical device development background and the specific FPGA electrical expertise required to assist in the project. And Aequorix Scientific Ltd. (Scarborough, ON, Canada) had real-time embedded software expertise and was familiar with developing software for FPGAs and codeveloped hardware.

"My involvement started with the first proof of concept and went all the way to manufacturing engineering," remarks Klaus Zietlow, president of Zietlow Design. "I was given the task of updating the electronics of the previous AV300 model, which used an entirely analog signal processing chain. While quite capable in its own right, it had certain limitations, such as directional sensitivities leading to poor vein detection when the device was held parallel to the patient's arm rather than perpendicular to it." In addition, moving to digital signal processing allowed Zietlow to explore and exploit more-sophisticated data-extraction methods to improve vein detection on optically difficult patients.

"While we faced several engineering challenges in developing the system, the biggest challenge was creating a small handheld device that could run on batteries for a full shift in a doctor's office while achieving superior vein detection compared with both the AV300 and competing products," Zietlow adds. "And because the computational requirements associated with image processing are high, the design had to be optimized to achieve low power consumption."

Developing the software for the AV400's main processor was Aequorix Scientific's main contribution to the project, according to Andras Zsoter, the company's president. This software operates the user interface controls and lasers while continuously monitoring and configuring the image-processing hardware. It also supports the testing and calibration of the device during the manufacturing process.

"Because the AV400 is a medical device, the software had to be robust and include various safety checks to prevent users from operating a potentially broken or malfunctioning device," Zsoter says. "In addition, consideration was given to supporting the future development of new features, such as the ability to download live videos from the device in real time."

For Aequorix Scientific, the most challenging aspect of designing components for a medical device was ensuring that the device would be safe to operate in a hospital environment. "All parts of the system needed to be engineered so that even if the device broke or malfunctioned, it would never expose the patient to more laser power than what was deemed to be safe," Zsoter emphasizes. "This required extra care every step of the way--something that one does not consider when dealing with industrial applications."

Tools should just work, Zott comments. "Pick up the AV400, press the blue button, and you see veins. It is entirely user-intuitive. As you move the device, the projection doesn't lag; it instantly updates and it is permanently aligned." Operational simplicity, Zott concludes, enables users to stop thinking about the tool and focus on the task at hand. They don't have to worry about how to hold it. They can move it up and down, rotate it over the patient, do whatever comes naturally. "In the end, all you see is the vein pattern projected on the skin."