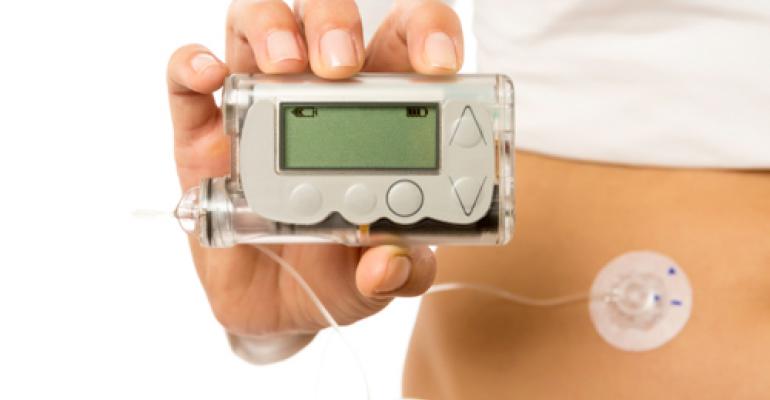 Insulin pumps have seen innovation in recent years with Tandem Diabetes coming out with the first touchscreen insulin pump - the tslim.

However, on the infusion set side - the accessories that actually deliver the insulin to the body from the pump - there hasn't been that much new in the last 15 odd years or so, says Brian Roper, global market segment leader for infusion sets at Becton Dickinson.

"The features that have changed are really around convenience," Roper says in a recent interview pointing to different colors that are now available as well as the fact that they now come with a disposable inserter which eliminates the need to manually push the catheters in.

But insofar as improving insulin delivery or making diabetes management easier and more reliable, no major change has occurred. Becton Dickinson is hoping to alter that landscape with the official launch of its FlowSmart infusion set technology.

The product was cleared by the FDA in mid May.

Roper explains that insulin flow is sometimes interrupted because of current design of infusion sets and patients ends up with unexplained hyperglycemia.

"What our research had shown is that there will be periods where the pressure is rising in the pump," but because it doesn't reach thresholds set by the pump, no alert is triggered.

"They go through the mental checklist- 'I didn’t eat anything unusual. I think I counted my carbs right. I think I did my exercise right. I don’t feel sick today,' " but despite all that the levels are high.

These problems are caused by design of the infusion sets, Roper says.

"It could be the position that they are sitting or laying at night - Is the catheter being pushed in a direction or is it pushing up against muscle or tissue?" Roper explains. "There’s a lot that occurs in the catheter that is unknown to the patient."

Becton Dickinson in collaboration with the Juvenile Diabetes Research Foundation and the Helmsley Charitable Trust developed the FlowSmart technology that has a novel side-ported catheter design. It also has a smaller insertion needle aimed to minimizing pain and trauma during insertion.

"What we have done is we’ve side ported that catheter so we now have a different way for the insulin to come out so it doesn’t rely on one port out of the distal tip," Roper explains.

"Experiencing hyperglycemia for even a short period of time can lead to disastrous consequences such as ketoacidosis, and over long periods of time, concerns of serious complications are a major part of living with type 1 diabetes for many people," says Derek Rapp, JDRF President & CEO, in a BD news release. "Having the assurance of this new technology in the arsenal of tools to help relieve the daily burden of type 1 diabetes is very encouraging. While the product has won FDA clearance, it won't launch immediately. Roper said that is slated for the company's 2016 fiscal year that begins in October. Preclinical and human trials have shown that the technology reduces these silent occlusion events, he said.
However, while the product may be clinically necessary, it's not clear how Type I diabetes patients who predominantly use insulin pumps as opposed to Type II patients, would access the new technology. The infusion sets work many different insulin pumps including those made by Medtronic, Johnson & Johnson and Tandem Diabetes, but no partnerships have been announced such that these pump makers can sell the infusion sets with their pumps in the future.
Without going directly to manufacturers, who typically sell pumps and the infusion sets together, Becton Dickinson's product would likely not gain the broad adoption it is seeking to have.
"There are patients who get their supplies after they get their pump using alternate models," Roper says. "In the U.S. there are the durable medical equipment distributors who sell these types of products."
While executives have not firmed up the commercialization strategy, Roper is only too aware of the market potential. He says that roughly 750,000 people globally use infusion with the majority of them concentrated in the U.S. and Western Europe. The infusion set is changed every 3 days and a patient uses 120 sets a year. Typical reimbursement for an infusion set is $9-$10.
"The way that math shakes out is that it is an $800 million category," he says.
Some companies that manufacture infusion sets are Unomedical, Smiths Medical, Medtronic and Accu-chek.
UPDATE: On June 8, Medtronic announced that it is collaborating with BD to commercialize the new technology to improve insuin pump therapy.
Arundhati Parmar is senior editor at MD+DI. Reach her at [email protected] and on Twitter @aparmarbb
[Photo Credit: iStockphoto.com user Click_and_Photo]
TAGS: News
0 comments
Hide comments
Related