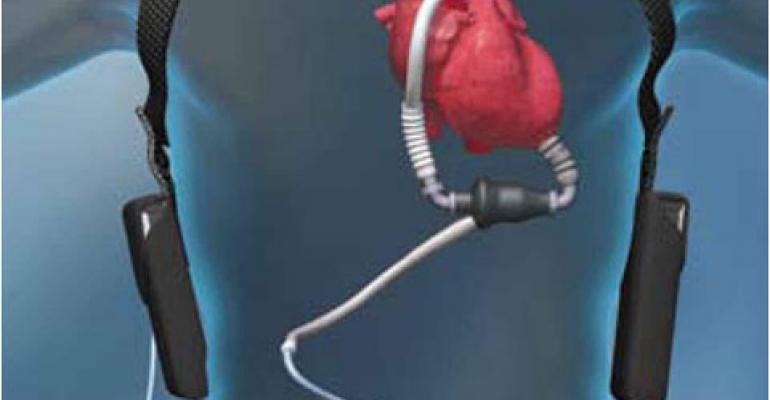 Cardiac implants that take advantage of the technology are already in development. Which medical devices could be next?

Once a dream of science fiction writers, wireless electricity is now a reality. Technology today allows for devices to be wirelessly powered and recharged over distance and through materials such as plastic, fabric, and even human tissue. These systems have the potential to revolutionize not only how we use our personal electronics, but also the medical device industry.

Using highly resonant wireless power transfer, systems can be designed to transfer power over distances up to several tens of centimeters safely and efficiently. The technology has the potential to enable a new generation of medical implants and could streamline the charging and sterilization process for many handheld, portable, and cart-based medical devices and instruments.

The idea of transferring power through the air has been around for more than 180 years, beginning with Michael Faraday’s pioneering work in magnetic induction during the 1830s. Faraday discovered that coils of wire placed close to each other could transfer energy by means of an oscillating magnetic field. His discoveries became the basis for many electrical devices that are now essential in our homes, offices, and factories.

Nikola Tesla is also well known for his ideas and experiments that aimed to send power wirelessly over long distances. However, practical technology for sending useful amounts of power over distance in a manner that is safe and efficient has only recently become available.

A transformer is a classic example of a device that uses the principle of magnetic induction to transfer energy from a primary coil to a secondary coil without a direct electrical connection. In the case of a conventional transformer, the primary and secondary coils are close to one another and usually use a ferrite core to improve the magnetic coupling. Inductive chargers, such as those found commonly in electric toothbrushes, operate on the same principle but are often referred to as air-core transformers because there is an air gap between the primary and secondary coils.

However, for these systems to operate efficiently, the primary coil (source) and secondary coil (device) must be matched in size and shape to one another, located in close proximity (within a few millimeters), and carefully aligned with respect to one another. There must be a large magnetic coupling factor between the source and device coils for proper operation of an inductive system. Otherwise, the efficiency of energy transfer drops off dramatically, resulting in excessive heating of the coils and reduced energy transfer. In most wireless energy transfer systems based on magnetic induction, a cradle or other mechanical means is used to hold the primary and secondary coils in proper alignment. An electric toothbrush is a good example of such a system.

The theory behind highly resonant wireless power transfer was developed and the first laboratory demonstration was performed by a team of physicists at the Massachusetts Institute of Technology (MIT; Cambridge). They were presented in scholarly publications in 2007.1,2 The MIT team first developed the physical theory that explains highly resonant near-field coupling of electromagnetic resonators. To validate its theory, the team demonstrated a highly resonant wireless energy transfer system capable of sending 60 W over a distance of 2 m at high efficiency.

The MIT team explored various techniques that could provide efficient energy transfer over distance, arriving at a nonradiative approach based on highly resonant magnetic coupling. Resonance is a property that exists in many different physical systems. An oscillating system’s resonant frequency can be thought of as the natural frequency at which energy can most efficiently be added to it dynamically. A playground swing is an example of an oscillating system involving potential energy and kinetic energy. The child swings back and forth at a rate determined by the length of the swing. The child can make the swing go higher if she properly coordinates her arm and leg action with the motion of the swing at the correct time and position.

An electromagnetic resonator is a system in which energy oscillates between an electric field primarily on circuit elements and a magnetic field that is created around the device. A highly resonant electromagnetic resonator loses little energy as it moves between the electric field and the magnetic field in each oscillation. By placing two or more such resonators tuned to the same frequency in reasonable proximity to each other, the resonators can couple magnetically and wireless energy transfer may be realized over distance in a manner that is more efficient and flexible than can be achieved using traditional magnetic induction.

The technology has already seen early traction in the medical device industry: WiTricity (Watertown, MA), the company founded by the MIT scientists mentioned, has partnered with Thoratec Corp. (Pleasanton, CA) to develop a fully implanted left-ventricular assist device (LVAD). However, this is just the beginning; the technology could be used in applications including implants, assistive hearing and vision devices, equipment carts, and hospital beds.

Benefits of highly resonant wireless power transfer include the following:

In the medical device industry, researchers and engineers are now developing next-generation medical implants which will harness the power of high resonance wireless power transfer. A promising example is a fully implantable (LVAD) in development by Thoratec Corp. LVADs are implanted into patients who have cardiac ailments such as congestive heart failure to serve as a booster pump to improve the circulatory function of a weakened heart.

Thoratec’s HeartMate LVADs are powered by a set of external batteries connected by a drive line routed into the body through the skin percutaneously (via physical puncture). The wound where the drive line enters the body is prone to infection and can result in frequent hospitalization and medical complications for the patient. As a result of the potential medical complications and the invasiveness of a permanent percutaneous drive line, LVADs are used today in a limited patient population as a bridge to transplant.

Thoratec and Witricity partnered in 2011 to begin developing a fully implantable LVAD that would move the battery inside the body to be recharged wirelessly using highly resonant wireless power transfer. The high-efficiency energy transfer range of more than 10 in. between the power source and implanted capture device, along with the flexibility in alignment and orientation, allows recharging by a high-resonance wireless power transfer system to be done without impacting patient comfort. In fact, the device could be recharged simply by sitting in a chair or lying in bed and without the need to remove clothing. Best of all, there will no longer be a permanent driveline wound as a source of infection.

Past efforts using traditional magnetic induction technology to recharge experimental implanted LVADs were unsuccessful due to the excessive heating of the primary and secondary coils. A traditional inductive system requires precise alignment and can only provide power over a small gap. As such, the patient would have to take great care when aligning and positioning an energy source with the implant. Any error in alignment would significantly affect the amount of power being transferred, result in longer charging time, and most significantly, result in excessive heating of the coils. Highly resonant wireless power transfer addresses these issues by providing efficient wireless power transfer over distance, with great flexibility in orientation and alignment. In fact, highly resonant wireless power transfer can eventually be used to power a fully implanted total artificial heart, as such devices need even more power than an LVAD.

A circulatory assist device like an LVAD is just one example of a medical device that can harness the benefits of highly resonant wireless power transfer. There is also promise for other implanted devices, including neurostimulators, implantable defibrillators and pacemakers, implantable drug-delivery pumps, electronic ophthalmic and cochlear implants, and rechargeable hearing aids.

In this broad range of implanted medical devices, high-resonance wireless power transfer can enable higher charge rates than would be possible with traditional magnetic induction. Higher charge rates allow for device implantation deeper within the body and enable more flexible charger configurations outside of the body.

For example, the wireless charger for ophthalmic or cochlear implants could be deployed in a pair of eyeglasses or a pillow. The wireless charger for a neurostimulator implanted in the lower back could be deployed in a chair or bed. Hearing aids could be recharged by simply placing them in a charging box on one’s nightstand, without requiring precise fixturing or galvanic contacts as do today’s rechargeable hearing aids.

Highly resonant wireless power transfer can be used with many other portable medical devices that are commonplace in hospitals and doctor’s offices. For example, the technology can be used to charge surgical power tools, handheld diagnostic instruments, and portable infusion pumps.

By eliminating the need for wired chargers or removable batteries, medical devices can be designed to be hermetically sealed, with smooth surfaces uninterrupted by connectors, charging ports, and battery compartment doors. Such devices are easier to sterilize and less prone to failures associated with repeated connector insertion and battery replacement. From a productivity and ease-of-use standpoint, such devices can be more easily charged without requiring multiple charging cradles and cords.

Another area of increasing interest to medical equipment manufacturers and hospital operators is the use of wireless charging for portable rolling equipment such as diagnostic and monitoring instrumentation, computer carts, drug-delivery carts, and gurneys. Today, such devices are built with battery packs that must be recharged by plugging them into a wall outlet. Charging cords present a number of problems in a hospital setting. In a crowded operating room or nurse’s station, charging cords can be a physical trip and electrical safety hazard. The cords and the charging connector ports on the rolling devices are difficult to keep clean and sterile. Wireless charging systems capable of transferring up to several hundred watts of power could overcome such problems and charge the battery packs in the same time as conventional wired chargers. An array of rolling equipment could be powered or recharged simply by positioning the equipment at a wireless charging hotspot deployed as a floor mat or attached to a wall. Additionally, eliminating charging cords would allow operating environments and patient care rooms to be quickly reconfigured to cater to constantly changing staff and patient needs.

Highly resonant wireless power transfer has the ability to enable a wide array of medical devices by powering or recharging them safely, efficiently, and over distance. The benefits of using this technology range from enabling implant architectures that could not otherwise be possible or practical, to improving the productivity and safety of patients and healthcare professionals, to improving the reliability and safety of rechargeable medical devices. Wireless electricity delivered safely, efficiently, and over distance has the potential to usher in a new generation of medical devices.

David Schatz is vice president of sales & business development for automotive, industrial, medical, and military at Witricity.
He joined the company in 2008, and prior to that was vice president of corporate development at Cognex Corp. (Natick, MA). Schatz serves on the advisory boards of EnergyClimate Solutions and Reify Corp., and is coauthor of seven patents. He holds a bachelor's degree in mechanical engineering from Carnegie-Mellon University and a masters in management from the MIT's Sloan School.