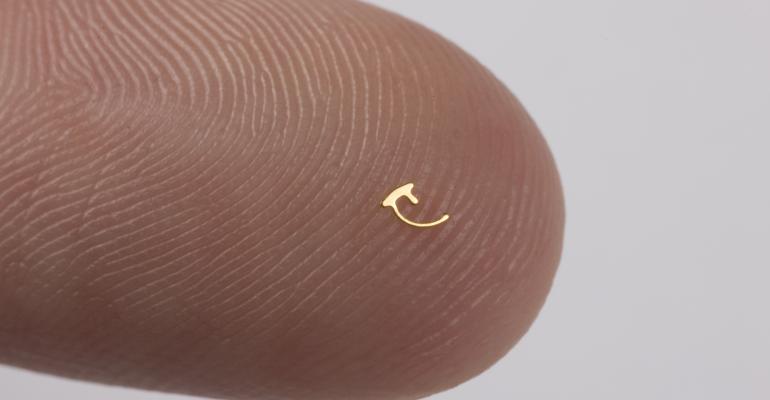 Stamping is not a new form of manufacturing, but modern medical devices have challenged component suppliers to come up with new ways to stamp metal components. In some cases, a stamper can find itself tasked with making parts thinner than a piece of paper using specialized tools that are equally small.

"We're effectively punching holes through metal with a steel punch that's the thickness of a human hair--and at speed, too," said Duane Kari, sales manager at Minneapolis-based Top Tool.

Top Tool's expertise includes stamping precious metal components, such as parts made from platinum and platinum iridium, a niche the company developed as miniaturization called for parts made from these metals in recent years. In the old days, stamping was more manual and more visual, Kari said. An inspector would periodically stop the press to check stamped parts. That's not possible anymore with medical device designs that require micro-sized parts. In response, Top Tool and others have incorporated sensing equipment to monitor the stamping process.

Computers and sensing equipment take measurements that the human eye cannot, which allows stamping companies to minimize risk and make components more precisely, Kari said. For example, drills and stamping dies become dull over time. But sensors now monitor stamping, so Top Tool can anticipate when a tool will lose sharpness or need cleaning. That's important as medical device components get smaller and smaller. When you drill with a bit the thickness of a human hair, you need specialized equipment to see and measure the process, Kari said.

With medical parts getting smaller, OEMs are asking for tighter tolerances from stamped components, said Tim Lynch, sales manager at Kenmode. The Algonquin, IL-based company has also invested heavily in sensors for its operations, which Lynch said can measure 34 different critical aspects of metal stamping. If components start to deviate beyond specified tolerances, Kenmode can address that problem right away. Lynch explained that the goal is to prevent problems, rather than detect them, which in turn allows for a more repeatable process with less downtime.

"It prevents us from having catastrophic failures," Lynch said. "It really allows us to make a higher quality part."

While many stamping companies supply stamped metal components for medical devices, some stampers stand out through specialization in a particular form of stamping. Integer, the Frisco, TX-based company formed by the 2015 merger of Greatbatch Medical and Lake Region Medical, focuses on deep and shallow draw, a type of metal stamping used to make enclosures and cases for Class III medical devices, such as pacemakers, defibrillators, and neurostimulators, as well as drug-delivery devices. Like other stampers, Integer has also invested in its technology, which vice president of operations Mario Rivera-Becerra said has changed in recent years to become more automated.

Regardless of the type of metal stamping, stamping companies want to begin talking with an OEM as soon as possible. Integer's work with an OEM typically starts with discussion about the device's design. Rivera-Becerra said these early steps are intended to provide early feedback to ensure the design is suited for manufacturing.

"The earlier in the R&D process we get involved, the easier it is to make the necessary changes and make sure timelines are met," he said.

At Kenmode, engineers take on this early work talking with medical device companies, Lynch said. Such discussions help outline the capabilities and limitations of Kenmode's stamping technology, and allow Kenmode to make recommendations if a redesign is necessary. OEMs are pressing stampers to shorten lead times as they aim to bring their products to market more quickly. Here, new technology also plays a role in helping stampers move the process along. Both Kenmode and Top Tool use software to simulate a part, as well as different approaches to manufacturing that part. These simulations help identify possible risks, affording a stamper the opportunity to address them with the OEM.

Kari said it can also be helpful for the OEM to share details about the device, such as where the device will be used, because implanted devices have different requirements than products that are only used outside of the body. OEMs aren't always willing to share specific details about their devices, a caution that goes both ways--Top Tool is also careful to avoid divulging some information, such as proprietary manufacturing techniques. But speaking generally, Kari said more information can smooth out a supplier's planning for a project. Having a sense of what a customer needs for a device can help the stamping company figure out its approach to stamping components, which in turn helps the company offer more accurate estimates about the time and cost of a project. Although a certain amount of customization is part of every project, knowing where and how a device will be used allows the company to follow templates and routines the company has previously used for similar projects. Techniques and experience from stamping components for other industries carries over to medical devices, both Kari and Lynch said.

Medical device stamping does come with some requirements that other industries don't face, such as the need for biocompatible materials. Rivera-Becerra said medical device requirements are becoming more stringent as OEMs tighten their supplier management controls. Regulators are paying more attention to how medical device makers manage their tier-one suppliers, he explained. As OEMs press their suppliers to develop processes and procedures to mitigate the risk of supply disruptions, Integer has made it a point to show them that it already has such controls in place, Rivera-Becerra said.