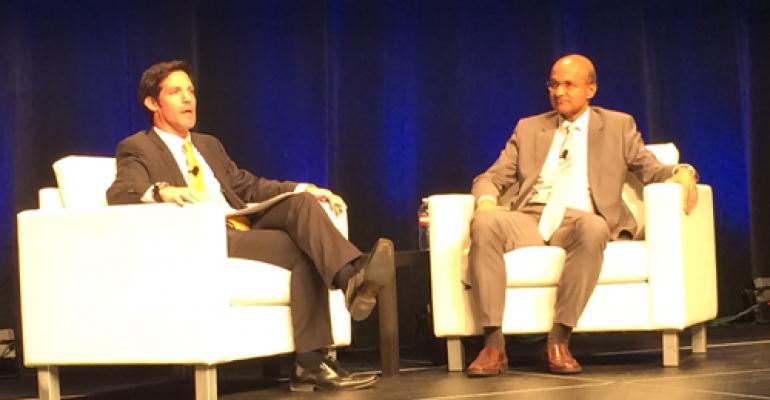 In a wide-ranging interview at a Minneapolis conference, Medtronic's CEO describes what value-based healthcare is and why it is important.

Large companies with entrenched relationships with hospitals and physicians aren't immune to the shifting sands either. In a wide-ranging interview conducted by Shaye Mandle, president of Lifescience Alley, a Minnesota medtech association, at the group's annual conference last Wednesday, Medtronic's CEO, Omar Ishrak, explained that it too has embarked on a journey to develop the economic evidence to convince various stakeholders that its products are clinically and financially meaningful.

Ishrak said that up until the mid 2000s the company had won much success by focusing on delivering innovative products that clinically improved people's lives.

The economic value analysis of products form the "core underpinnings of value based healthcare," Ishrak declared.

It's interesting that Ishrak chooses to the use the term "correctly decided" to define the move to value-based healthcare given how much grumbling there is from industry on precisely this move and the pressure it is creating.

It was certainly a much easier world when all devices had to do was show was they were safe and effective. Then companies could send their sales reps to convince their favorite physician about the benefits of the device.

Now of course, in addition to physicians, companies have to learn the skills to sell to hospital administrators and others who are less concerned about a new cool feature of a product that would help the physician or surgeon do his or her job better. They have a laser-like focus on cost containment.

And yet Ishrak's description is also a recognition that the path of incremental innovation with a price premium slapped on to the next-generation device was not sustainable because it makes the healthcare system just too expensive. That makes the message that value-based healthcare is indeed the way forward powerful especially when espoused by the likes of Ishrak.

Still, Ishrak was quick to admit that that tranformation not a simple matter - it's not as if it is a "light switch" that can be flipped at will. here's how he described the challenges:

So this means that learning how to measure cost over an extended period of time in an objective and fair fashion that depicts the true value of the technology that’s being implanted or deployed, at its core that is really value- based healthcare.

Once you do that, then you can go to a variety of stakeholders in a matter of fact way and demonstrate why your products have value.

Ishrak declared that DRGs (diagnosis-related groups) and the 30-day readmission penalty are examples of value-based healthcare that's already at work, although the 30-day readmission rules can be abused with people being readmitted to the hospital say on the 31st day so that hospitals can avoid the Medicare penalty.

The move to value-based care will not be overnight but it will not take an eternity either given that hospitals and payors are driving this today.

"We are early in this journey, however I will say that there are enough programs out there, there are enough demonstration projects are out there that I think by and large will provide results," he said. "And if they are not successful, [but] if they are well-designed demonstration projects, we will understand why. I think at some point, I predict - and I have got nothing other than pure sense or intuition around this - that within the next five years, you will see an inflection point. where these things will gather more momentum and the slope toward moving toward value-based healthcare will change dramatically."

Medtronic is involved in some projects itself - for instance, with Aetna, Medtronic is doing a two-year pilot project where it will work with physicians to get 300 diabetes members of Aetna on Medtronic's insulin pump therapy. The goal is to prove that insulin therapy is more effective than daily insulin injections in managing the expensive, chronic disease that diabetes is.

And Ishrak had a message for all those who are waiting on the sidelines while others launch pilot programs to begin validating the value of their products.

"At some point, the ones who are waiting will see that there is enough motion, that they have to jump on this train." he said.