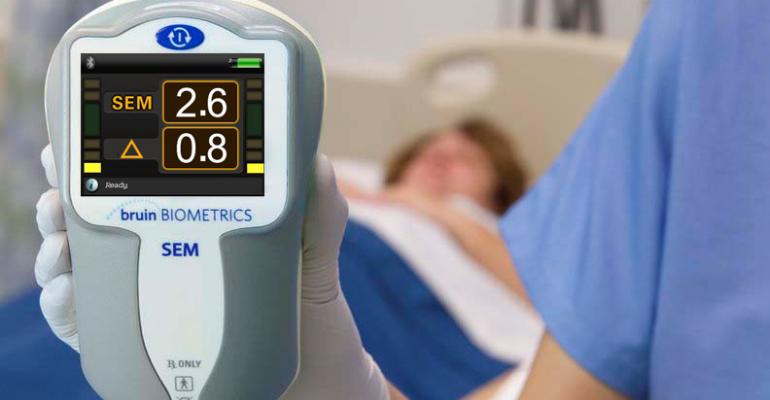 Bruin Biometrics (BBI) is looking to shake up the way patients are assessed for pressure ulcers with its SEM scanner. FDA granted de novo marketing authorization for the device which can help uncover a patient’s risk for bedsores and gauge whether there is tissue damage.

The device looks to evaluate subepidermal moisture, which is a physical marker associated with localized edema in the initial inflammatory phase of pressure ulcer formation.

BBI submitted to FDA in March of 2017 and had multiple meetings after the submission. The company also submitted about four rounds of additional data and had an unannounced audit the data [which it passed] in June 2018.

“We then got the [FDA de novo] granting letter in December of 2018, right before the [partial] government shutdown,” Burns said. “It’s a long process and a very rigorous process.”

FDA authorization was based, in part, on data from a clinical study assessing performance of the SEM Scanner compared to visual skin assessment by nurses in 182 patients at risk for pressure ulcers at 12 hospitals and skilled nursing facilities in the U.S. and U.K.

The device could have a tremendous impact on healthcare costs, according to Burns. Each year about 60,000 people in the U.S. die from complications from pressure ulcers, at an annual cost of up to $11.6 billion a year. These injuries result from pressure and shear causing localized damage to the skin and underlying tissue, typically at areas of bony prominence, such as the heels and sacrum.

The technology could help change the paradigm, said Ruth Bryant, a SEM Scanner study investigator, author of “Acute & Chronic Wounds” (2016), certified wound ostomy continence nurse, director of nursing research at Abbott Northwestern Hospital in Minneapolis and president-elect of the Association for the Advancement of Wound Care.

The anatomically specific information combined with tailored preventive actions may ultimately translate into fewer pressure sores, decreased costs, increased quality of patient care, increased patient satisfaction and decreased risk for adverse events due to pressure ulcers such as in-hospital mortality, prolonged length of stay, discharge to an extended care facility rather than to the home, and infection,” Bryant said in a release.