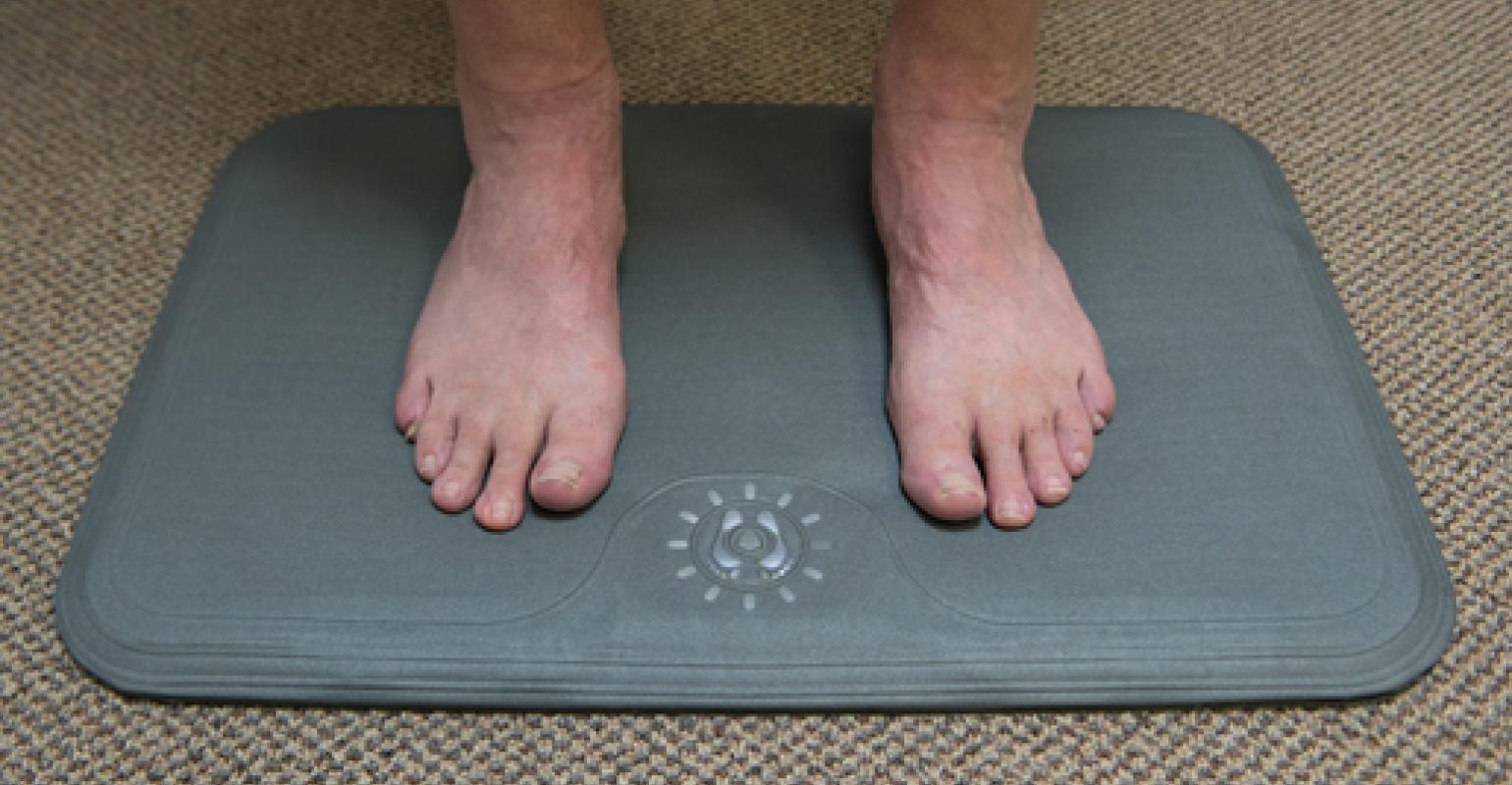 The Podimetrics SmartMat was designed for earlier detection of diabetic foot ulcers
Clinical studies are underway for a new “smartmat” technology from Podimetrics that can detect early symptoms of a developing foot ulcer long before they appear.

Podimetrics has the diabetic community buzzing over its latest study analyzing the clinical results of its flagship technology, the Podimetrics SmartMat. The device was shown to detect 97% of developing non-traumatic plantar foot ulcers, and did so roughly five weeks before they presented any visible signs clinically.

Patients involved in the study indicated that using the new system was a quick and effortless process that only required them to stand on the mat for 20 seconds while the system reads the patientâ€™s foot for temperature abnormalities. While standing on the mat, the system works to create a thermal map of the bottom of the foot, where most diabetic foot ulcers develop.

Podimetrics is  a relatively new startup formed by five strangers at an MIT "hacking medicine" event in 2011.  The underlying principle of the company's technology is that before new foot ulcers develop, the skin becomes inflamed from the effect of excess pressure. That inflammation eventually leads to increases in skin temperature, which can be identified by the system to predict where new ulcers are likely to develop, long before they present any visible signs.

In addition to the promising detection data, the study also found that 86% of patients used the smartmat at least three times per week, with 88% of the patients reporting that using the device was a quick and simple process.

Jonathan Bloom, CEO and founder of Podimetrics, said that the device was specifically designed to be simple and quick for patients, while remaining effective at monitoring for potential symptoms and notifying both the patient and a physician when necessary.

â€œOur system consists of a wireless SmartMat for the home, and a monitoring service that notifies patients and clinicians when signs of inflammation may be developing,â€ Bloom said. â€œTo use the system, a patient stands on the mat for 20 seconds per dayâ€”similar to using a simple scale. Patient data is then sent instantly to the cloud, where our system is used to measure the temperature difference between the feet at various locations, looking for possible persistent asymmetry, or a â€˜hotspot.â€™ If a developing hotspot is detected, the healthcare provider is notified and from there an intervention is planned by the physician.â€

Bloom said that most interventions require the patient to decrease their physical activity levels while the foot heals itself. One major contributing factor that leads to the development of a foot ulcer is nerve damageâ€”something that prevents the patient from feeling small injuries in their foot. Patients who live with diabetic nerve damage often do not notice certain signs of pain or inflammation in the foot, and with continued use over time, these symptoms can lead to the development of a foot ulcer. In severe cases, diabetic foot ulcers can cause irreversible damage that can lead to amputation.

â€œDiabetic foot ulcers are a common and expensive complication of diabetes, which can result in amputation in serious cases and are estimated to cost the system more than $17 billion annually,â€ Bloom said. â€œApproximately 1.7 million Americans suffer from one or more diabetic foot ulcer each year. If this technology becomes widely adopted, we hope this can have a tremendous impact.â€

The system has already been cleared by FDA and the company aims to begin working on a robust clinical program that can demonstrate the effectiveness and utility of the product. The company just completed a 34-week evaluation of the system that involved 129 participants with diabetes who  had previously experienced diabetic foot ulcers.  Ian Gordon, chief of vascular surgery at the Tibor Rubin VA Medical Center where the technology was tested, said that the early detection that this system offers could be quite transformative.

â€œThe ability to identify weeks in advance where new foot ulcers are likely to develop in an early warning system can allow time for a patient to be evaluated by a doctor who can guide adjustments in shoes and other therapies to prevent the new ulcer from occurring,â€ Gordon said. â€œMore than half of diabetics who develop a foot ulcer that heals will either have a recurrence or a new ulcer within two years. This technology provides an effective method for monitoring patients at risk, and accurately identifies the exact location where the next problem will occur. This technology has tremendous potential for improving diabetes management and preventing amputations because prevention is much easier to achieve than healing.â€

Perhaps the most notable advantage the company has is how close the technology is to hitting the market. Bloom said that to his knowledge, the SmartMat is the only FDA-cleared remote monitoring technology available for the prediction and prevention of diabetic foot ulcers. Having already raised over $8 million in funding from Norwich Ventures and Scientific Health Development, the company has been able to test the device in more than 650 patient homes.

Bloom indicated that as the company moves forward with the technology, they hope to continue to generate data through clinical studies that will reinforce the effectiveness of the device, while also ramping up their manufacturing capabilities to help prepare for the demand of the SmartMat system.

â€œOur goal is to maximize this opportunity and help patients,â€ he said. â€œWe hope this approach will help us meet our goal, which has always been to transform the lives of diabetics by helping prevent foot ulcers.â€