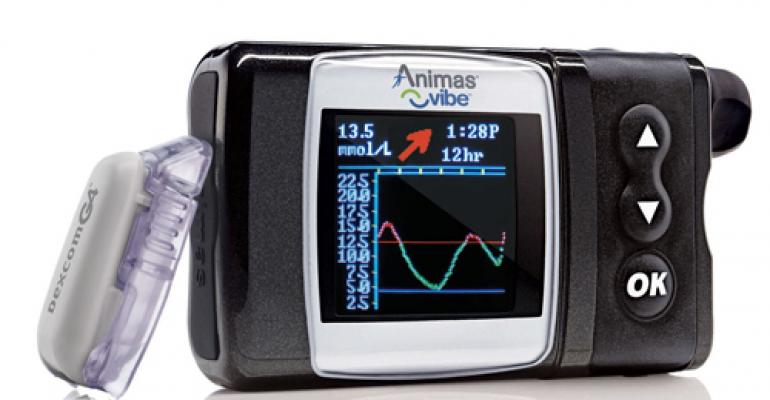 This will likely heat up competition between Dexcom and another big name in the world of diabetes - Medtronic - with Dexcom getting the leg up, believes at least one analyst.

But first, here are the features of the device. Johnson & Johnson and the company it acquired - Animas Corp. - is billing this device as the world's first and only integrated system featuring the Dexcom sensor. It may be the first pump to use the Dexcom sensor, but an integrated insulin pump and continuous glucose monitoring system is already available in the market from Medtronic.

And neither of these two devices from Medtronic and J&J/Dexcom are truly integrated even though Medtronic claimed that its MiniMed 530g insulin pump with Enlite Sensor was a "first-generation artificial pancreas." In a truly integrated system, the pump would be smart enough to automatically adjust insulin delivery based on readings from the continuous glucose monitoring (CGM) system, wrote Gregory Chodaczek, an analyst with Sterne Agee, in a research note Monday - and do without requiring input from the patient.

While we are not there yet, that will happen one day, Chodaczek believes. The Animas Vibe with DexCom's sensing technology, is however a "step in the right direction." The pump allows patients to view glucose readings on its screen without the need to carry the Dexcom receiver, Chodaczek wrote in a research note Monday.

Here are other key features according to the news release:

The pump also allows a certain level of personalization including insulin-carb ratios and insulin sensitivity. It also can alert patients when glucose levels falls perilously.

For diabetes patients looking to use an insulin pump along with a CGM system, Medtronic's 530g with Enlite Sensor technology so far provided a winning solution. When blood glucose levels becomes dangerously lowly - which usually occurs in the overnight, early morning hours when a patient is asleep - and if the patient doesn't respond to two alarms, the system automatically suspends insulin delivery.

"While Animas Vibe does not have the same low glucose suspend feature, it will allow [Dexcom] to more readily address the patients who prefer an integrated pump/CGM system but also want the accuracy and comfort of the Dexcom sensor," wrote Danielle Antalffy, an analyst with healthcare investment bank Leering Partners, in a research note Monday.

She added that although DeXCom is "generally regarded as the best CGM system, with best-in-class accuracy and comfort, [Medtronic's] key advantage in the CGM market had been an integrated pump/CGM offering. Now with Animas Vibe launching in early 2015, [Dexcom] will be in a position to compete even more effectively despite already being the market leader."

And the story is likely to only get better for the San Diego-based company over the short term. Dexcom is looking ahead to other approvals including one involving an integrated system with Tandem Diabetes, the maker of the world's only touchscreen insulin pump, Antalffy wrote.