Does Abbott Risk Lower Growth in Becoming a Point-of-Care Giant? 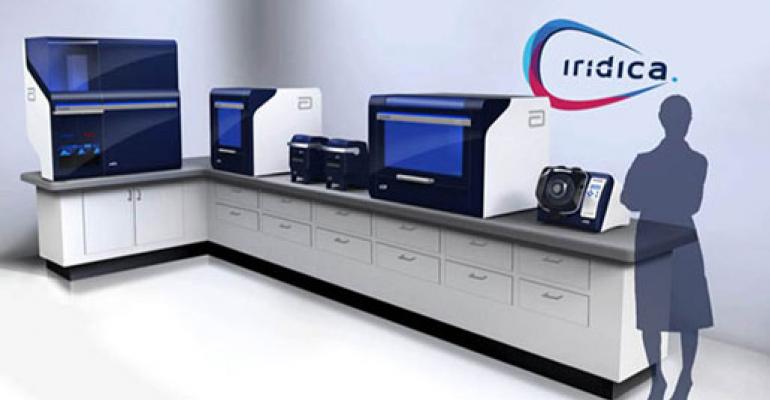 Abbott dramatically expands its point-of-care-diagnostics business with the intended acquisition of Alere, but some analysts are asking how the transaction might impact the company&#39;s growth outlook.

Abbott's IRIDICA System, which has CE Mark, is part of its diagnostics business, offering rapid direct sample testing for a variety of assays.

After hinting on its fourth quarter earnings call last week that it was interested in M&A transactions, Abbott announced on Monday a $5.8 billion agreement to acquire diagnostic test maker Alere. The transaction is expected to significantly expand Abbott's $4.6 billion annual revenue diagnostics business, of which $473 million is point-of-care diagnostics, according to a company-provided comparison. Still, some analysts expressed concern that the purchase might present a growth challenge to Abbott.

Abbott, which will become the biggest point-of-care testing provider once the deal is approved and closed, will pay $56 cash for each common share of Alere and Alere's $2.6 billion net debt is expected to be assumed or refinanced by Abbott. The deal is being financed with debt. It is expected to be immediately accretive to Abbott earnings per share, as well as to bring $0.12-$0.13 of accretion in 2017 and more than $0.20 in 2018, according to the company release.

On a Monday call with analysts to discuss the transaction, Abbott management repeatedly emphasized the complementary nature of Alere's $2.5 billion revenue business and point-of-care products with Abbott's portfolio. Brian Blaser, executive vice president of Diagnostics Products, told analysts that Alere's product portfolio, with over 10 product platforms, and a large geographic and commercial range, made the acquisition appealing. "We think that this is just a great business with a fantastic set of products that's going to be very complementary to our own point-of-care business and something that we're going to be able to leverage broadly in the marketplace for some great growth," Blaser said.

Waltham, MA-based Alere sells tests and instruments for a number of applications across cardiometabolic, toxicology, infectious diseases, oncology, women's health, and clinical immunology categories. Its Alere i Influenza A & B test offers quick diagnosis of molecular flu in under 15 minutes.

Abbott's point-of-care offerings include its i-Stat System for patient-side blood analysis. The company also has the CE-Marked IRIDICA System for rapid direct sample testing with bacterial, fungal, and viral assays.

[For more on M&As in medtech, check out our comprehensive list of Medtech Mergers & Acquisitions of 2015.]

Analysts seem to agree that the acquisition brings together complementary products, but Alere's growth profile has historically been markedly different than Abbott's. Alere has been described as a turnaround story, with new leadership, brought on board in 2014, cutting expenses and divesting Alere Health and BBI Group last year. Abbott's point-of-care diagnostics business reported 11.7% year-over-year operational growth for 2015, according to its January 28 earnings release.

When asked about the historical differences, Miles White, Abbott's chairman and CEO, pointed out that Abbott has "consistently been achieving growth rates above market worldwide with our diagnostics business and [the diagnostics management team has] done a great job with margin management and margin improvement."

In response to another analyst's question, Thomas Freyman, Abbott's executive vice president of Finance and Administration, said of Alere, "If you look historically at this business, there have been a few challenges, but those really have stabilized in the last year or so. As Miles indicated, the fundamental growth rate of this market is in the mid-single digits, so with good execution and some of the products . . . we easily accelerate the growth rate of this. I think the final piece of the equation is the synergies with our commercial organization, when you put these two businesses together, both geographically and from a portfolio perspective, I think that will also contribute to the acceleration of the growth rate."

Rick Wise, analyst at Stifel, agreed with management's view of the deal's potential, calling it a "compelling strategic transaction" in a research note Monday. He wrote, "We acknowledge that ALR faces company-specific headwinds, and while it may take time to accelerate sales growth to mid-single-digit targets, Abbott should be able to leverage its extensive global infrastructure and Diagnostics expertise to drive sales synergies (OUS/emerging markets opportunity) and operational efficiencies. We have significant confidence in ABT management, who have historically demonstrated execution strength in Diagnostics and believe that this deal could represent another typical, ABT value purchase of an under-performing asset with room for both top-line acceleration and margin expansion."

"This is a pretty fundamental and key acquisition we're talking about today for our diagnostics business, but it's not the only thing on my radar screen, and it's not the only thing in the center of my radar screen. I've got some other priorities and things that are pretty important to us that we're looking at . . . and I believe that we've got the balance sheet capability to pursue everything that's kind of within our wish list, if you will, to strategically strengthen these businesses, and I'm pretty optimistic about it, to be honest."