The company is poised to take on Medtronic in the fast-growing sector of the neuromodulation market. 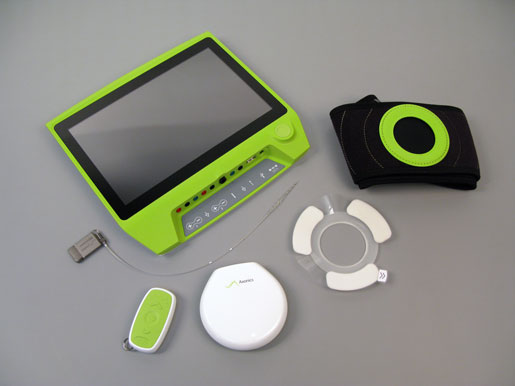 The Axonics r-SNM system represents the first rechargeable option for patients with bladder and bowel dysfunction.

A company that appears to be well-positioned to take on an industry titan in a fast-growing sector of the neuromodulation market has attracted some fresh capital. Irvine, CA-based Axonics Modulation Technologies raised $20.5 million in the second trench of its series C financing, bringing the round's total to $35 million.

Axonics is working to bring its rechargeable sacral neuromodulation (r-SNM) system to the U.S. market for the treatment of urinary and bowel dysfunction. The device received CE Mark approval in Europe last year and has also been approved in Canada. Sacral neuromodulation works by stimulating the sacral nerve, which is responsible for bladder and bowel function.

Geoff Pardo, a partner at Gilde Healthcare who joined the Axonics board as part of the financing deal, said the SNM market is projected to grow to more than $1 billion in revenue in the next few years.

"We are confident that Axonics, given the quality of its management team and its miniaturized implantable rechargeable system, is poised to take a measurable portion of that market following FDA approval," Pardo said.

Medtronic is currently the only other competitor in the SNM space. Its product, the InterStim System, is not rechargeable though, so it needs to be explanted every few years. Axonics said its device is designed for a 15-year lifespan in the body, more than triple the lifespan of other sacral neuromodulation technologies, and the system's implantable pulse generator is 60% smaller than Medtronic's device. The system also includes a small remote control and clinician programmer.

As Axonics CEO Raymond Cohen told Qmed's sister publication MD+DI last year, the company plans to launch a U.S. pivotal study in the second half of this year.

The company recently reported initial results from a prospective, multicenter study in Europe. That study, dubbed RELAX-OAB, enrolled a total of 51 overactive bladder patients with symptoms of urinary urgency incontinence and urgency-frequency. Those results, which were presented at the 2017 International Neuromodulation Society World Congress in Edinburgh, Scotland at the end of May, included 33 patients who had already reached their three-month primary endpoint, the company noted.

At one month, 71% of patients were initial responders to therapy, defined as 50% or greater reduction in incontinence or urgency-frequency symptoms, or a reduction to less than eight voids a day in urgency-frequency patients. The data also showed that 91% of initial responders continued to respond to the therapy, and those patients reported clinically meaningful improvements in quality of life since the device was implanted. There were no serious or unanticipated adverse device-related effects reported, but the company did note that two patients required surgical intervention.

The device is an example of how medtech companies and product designers are beginning to think about the patient's everyday experience with implantable devices in order to make sure that experience doesn't detract from the benefits of the technology. Stuart Karten, the principal of Karten Design, used Axonics as an example in this contributed Qmed article about humanizing implantables.

While Axonics has yet to fully launch its device in Europe, experts anticipate that the new entrant could have an impact on the pricing of SNM devices. Europe has seen an increase in growth in the SNM sector, due in part to an increasing awareness of the technology among patients and doctors. Medtronic has been selling its InterStim therapy in Europe since 1994.