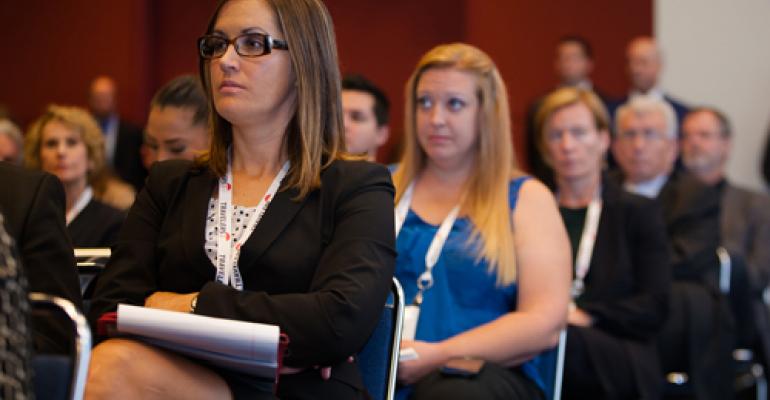 AdvaMed's annual conference just concluded in Chicago. What key themes emerged from this year's gathering of the medtech industry?

One of the top medical device conferences - AdvaMed 2014 - concluded in Chicago, Wednesday and a few themes emerged around an industry that is witnessing seismic changes in what the marketplace is demanding.

Reimbursement Is The New Challenge
An executive from health insurance company Cigna succinctly encapsulated the mood of the medtech industry when it comes to reimbursement.

"The enemy used to be the FDA and now I hear it's us," said Scott Josephs, MD and VP, National Medical Officer, Cigna to the audience, only half joking.

In fact at AdvaMed officials kicked off the conference with the results of a report that argued that insurance companies are acting as gatekeepers and providers are not adopting new technology because cost is such an overwhelming concern for both providers and payors.

The AdvaMed-sponsored study that surveyed nine payors representing 110 million covered lives found that five of them reported becoming more selective over the past three years in approving new technologies. The study did not identify the names of the payors who participated, however, and also said that providers are reluctant to adopt new technology even if it is superior.

FDA Environment Has Dramatically Improved
The conference seemed to be a virtual love fest especially compared with past years, when the FDA was the industry's favorite whipping boy.

In session after sessions, CEOs and other panelists commented on the vastly improved environment at the FDA and credited the agency for being more open, collaborative and faster in reviewing products.

"I think the FDA climate has dramatically improved," said Mike Mussallem, CEO of Edwards Lifesciences. If we go back just a few years ago, it seemed that we were at loggerheads on a pretty regular basis....I think also the FDA has become more sensitized in making sure that Americans actually get to benefit some of the most innovative technologies."

In fact both Dr. Jeffrey Shuren, director of the Center for Devices and Radiological Health at the FDA and the agency's commissioner, Margaret Hamburg, talked about an effort by which they want to encourage companies to conduct first-in-human clinical trials in the U.S. The industry modus operandi has been to conduct these trials abroad.

Show Don't Tell
The device industry seems to be reluctantly recognizing that the era of adding new features and slapping on a higher price to the "new" product and expecting providers to buy it and payors to reimburse it is largely gone.
Providers and payors want data to show that the industry's products provide value - reduce cost, improve clinical outcomes or lead to better patient satisfaction scores.

Mussallem described the common refrain he has been hearing from hospital customers.
"I know you have a great relationship with my doctor, but that doesn't matter. Bring me the hard evidence that your innovations matter," he told the audience.

One clinical outcomes improvement for instance could be in the realm of heart failure devices.

Hospitals are focusing on heart failure readmissions rate because the Centers for Medicare and Medicaid Services are penalizing hospitals financially if a heart failure patient is readmitted to a hospital within 30 days of discharge. A product that can attack this problem and prove it works, will win attention from both payors and providers.

A focus on quality and value of products is key now.
"Bar is being raised on quality and we have to respond to that," said Vincent Forlenza, CEO, Becton Dickinson.

Share The Risk
As providers move from a fee-for-service model to a fee-for-value model, they are instituting new payment models that are putting the onus on device makers to prove that their products work.
In that relationship, providers want device makers to share in the risk while doing purchasing contracts. In other words, if the clinical or cost outcomes are achieved by the use of a particular medtech device, then device makers can stand to get more money through higher prices. But if the product falls short, then device makers have to make do with less.

"We want manufacturers to take the next step and go at risk with the price of the product for the difference in clinical outcomes," said Susan DeVore, president and CEO of Premier, a company that works with hospitals to improve outcomes and lower costs.

Drug companies are already doing this. For instance, Cigna has a contract with EMD Serono, a biopharmaceutical division of Merck KGaA, related to its multiple sclerosis drug Rebif. When the product performs better, EMD Serono gets paid more.

The drug has led to “43% fewer hospitalizations and 98% better adherence to drug regimen,” said Josephs of Cigna. “It's a win-win."

Price Transparency is Here
The advent of consumer-directed health plans is leading people to really scrutinize what health value they get in exchange for their premiums.

Although device makers are removed from this equation, they will not be immune to the trend of price transparency in healthcare, said Tim Durst, partner, A.T. Kearney.

For instance, DeVore of Premier described how there is 40% to 60% variation in price on the same spine, cardio and joint product across 3,000 providers. One of the causes of this variation is that there is no easy way to identify products in the medical device world.

"The ability to actually know which supplier, which product and which one is exactly equal to another one, is not enabled." DeVore said, noting that FDA's unique device identifier mechanism is taking a stab at this problem. "Providers are beginning to figure out this price variation and saying, "I don't understand why.'"

Consolidation Will Continue
Much has been written about mega mergers in the medtech space. There is Medtronic attempting to go overseas with Covidien; Zimmer trying to gobble up Biomet in its home city in Warsaw, Indiana; and most recently, New Jersey-based Becton Dickinson reaching across the length of he country to acquire San Diego-based CareFusion.

But these moves are just a response to the broader consolidation in healthcare among hospitals and payors.

"Particularly as you look at metropolitan areas like Chicago, consolidation is inevitable," said Mark Neaman, president and CEO of Northshore University HealthSystem. "There is an excess capacity particularly on the hospital side of this ... For Northshore, only 30% of our revenue are from the in-patient businesses ...."

As a result, hospitals are buying physician practices, ambulatory surgery sites, specialty care centers and sites along the continuum of care. At the same time that there is this horizontal integration, there is also vertical integration, explained DeVore of Premier. The vertical consolidation is occurring as hospitals are deciding to work with fewer device vendors and fewer suppliers overall.

And this climate is spurring medtech mega mergers similarly looking for scale in a changing landscape.

Healthcare Still Needs Innovation
While hospitals are looking for partners in medtech firms who can help them solve operational problems and become more efficient, they are still very keen on breakthrough innovation.

Neaman of Northshore University HealthSystem talked about doing a small study with a device that could eliminate infections in IV lines. But data showed that it also lowered cost.

"We need the technologies; we just need to demonstrate that it improves quality and can take out cost," Neman said.

And those small companies plugging away at novel technologies are vitally important for the medtech ecosystem, said Jose Almeida, CEO of Covidien and AdvaMed’s chairman.

While large companies like Medtronic, Covidien and others have the ability to help hospitals become efficient, it's the small company that can prove to be invaluable on the clinical side. They are the ones that larger companies can buy once their technology is somewhat proven.

"We still need small companies to focus on innovation," Almeida said. "They are not going to have the expertise to help hospitals in the cath lab or in the OR."