In the Battle of Surgical Robot Makers, Intuitive Surgical Is Still Top Dog 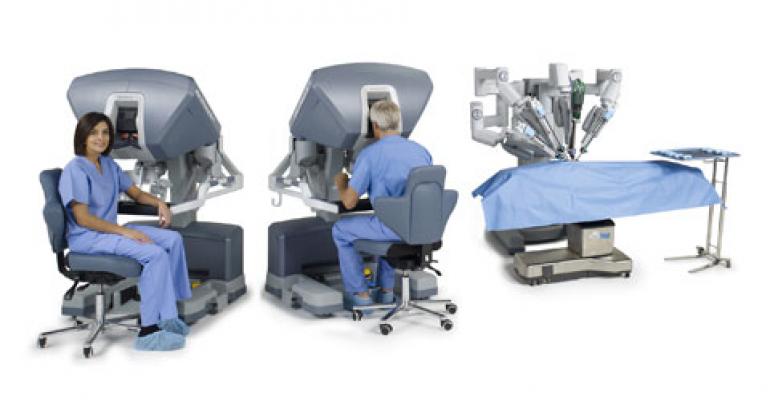 Despite the considerable medical breakthroughs that have been made in recent decades, modern healthcare is still largely based on advances made in the industrial age. According to the estimates of surgical robotics pioneer Richard Satava, MD, only about 1% of medicine is truly based on information-age science. While it is difficult to quantify such things, the influence of the digital age on medicine in clearly growing. And as that momentum builds, so does the level of criticism and resistance to the change.

Despite the considerable medical breakthroughs that have been made in recent decades, modern healthcare is still largely based on advances made in the industrial age. According to the estimates of surgical robotics pioneer Richard Satava, MD, only about 1% of medicine is truly based on information-age science. While it is difficult to quantify such things, the influence of the digital age on medicine in clearly growing. And as that momentum towards digital medicine builds, so does the level of resistance to that change. Consider the uneven reception among clinicians to electronic health records as a case in point.

In the field of surgery, perhaps nothing illustrates the digital age technology as well as the da Vinci surgical system from Intuitive Surgical (Sunnyvale, CA). The device, whose roots go back to a research project funded by the Defense Advanced Research Projects Agency (DARPA), is no mere machine. It is better thought of as a functional information system with arms and legs, according to Satava, who was instrumental in the device’s development while working as a project manager at DARPA.

The robot, which is controlled from a remote console via two hand controllers and foot pedals, enables surgeons to perform an array of activities, including pre-operative planning and surgical rehearsal, open and minimally invasive surgery, remote telesurgery, and image-guided surgery. Surgeons using the system get a highly magnified view of the patient’s tissue via the unit’s built-in HD 3-D display. One of the chief benefits of the device is that, once surgeons are proficient using it, they can operate on patients with superhuman dexterity. According to the company, that translates into minimal tissue damage and quicker recovery times for patients. The company continues to expand the da Vinci's capabilities with ancillary products such as the Single Site line, EndoWrist One Vessel Sealer, and Firefly fluorescence imaging system.

Seldom does a medical technology generate as much buzz as the da Vinci. Hospitals across the United States, and the world, have embraced the technology: the number of systems installed across the world is approaching 2000. In many cases, hospitals owning a da Vinci use the robot in their marketing campaigns—to make their facilities look high tech and to drum up business. In fact, hospitals have been so enthusiastic about this technology that many of them bought da Vinci robots in the economic downturn—while they made cuts in other areas, according to the Hospital Executives survey commissioned by ITG Market Research in early 2012. In Europe, however, there has been a recent slowing of da Vinci procedural growth that the company links to the continent's austerity measures. In the United States, there has also been a gradual decline in the use of the da Vinci in prostatectomy procedures.

This high level of enthusiasm has done wonders for the multibillion-dollar company’s stock, which has consistently exceeded Wall Street earnings expectations. On July 19, the company announced that it had a 26% increase in revenue to $537 million in the second quarter of 2012. Procedure growth in the second quarter of 2012 was also approximately 26%. The company's second quarter profit rose by 32%. At the time of writing, it is trading at nearly $550 per share. In February, investment site Seeking Alpha ran an article suggesting that it is possible for the stock to go as high as $700 per share. Other analysts are less bullish but the fact remains that Intuitive Surgical continues to dominate the surgical robotics space. By contrast, another surgical robotics player, Mako Surgical, struggled to meet anticipated demand for its RIO surgical robotic systems in the first quarter of 2012.

The da Vinci is not without detractors, however. Critics of the technology often point to the technology’s high cost (the robots cost an average of $1.4 million apiece) and suggest that its clinical advantages are exaggerated. To cite a recent example: In May, bioethicist Ezekiel Emanuel penned a column for The New York Times, explaining that the Da Vinci was an prime example of “pseudo-innovation — a technology that increases costs without improving patients’ health.” To back up that claim, Emanuel explained that the device “has never been shown by a randomized trial to improve the outcomes of prostate surgery.” In one study, robotic prostate surgery was linked to fewer in-hospital complications, but, as Emanuel points out, it was associated with worse results for impotence and incontinence.

There are a number of other studies supporting the technology's effectiveness such as one published in European Urology which support the claim that robotic surgery reduces complications are reduced and length of hospital stays while achieving good outcomes. In any case, the capabilities of surgical robotics are continuing to advance and the future for surgical robotics appears to be bright over the long term. A recent report from WinterGreen Research suggests that global surgical robot markets will continue to grow over the long run. As the field of surgical robotics advances, a greater portion of traditional open surgeries will likely be converted to robotic procedures, according to Susan Eustis, lead author of the study. The company plans on expanding the capabilities of the da Vinci with the introduction of a family of stapler products and an expansion of its vessel sealing line.

In the near term, competitors in the field will be kept at bay by Intuitive Surgical's solid patent portfolio. As the patents expire, new players are likely to enter the field—perhaps with less expensive robots. One potential challenger is the Raven, which, like the Da Vinci, was also originally developed for the U.S. Army.

In any event, it is likely a safe bet that robots will play increasingly important roles in operating rooms going forward. Richard Satava imagines a future in which the only person in the operating room is the patient. A surgeon—working nearby or remotely—oversees the procedure will robots do everything else, including the work of scrub nurses. And it is also probably a safe bet that Intuitive Surgical will play an important role in continuing to advance this nascent field.