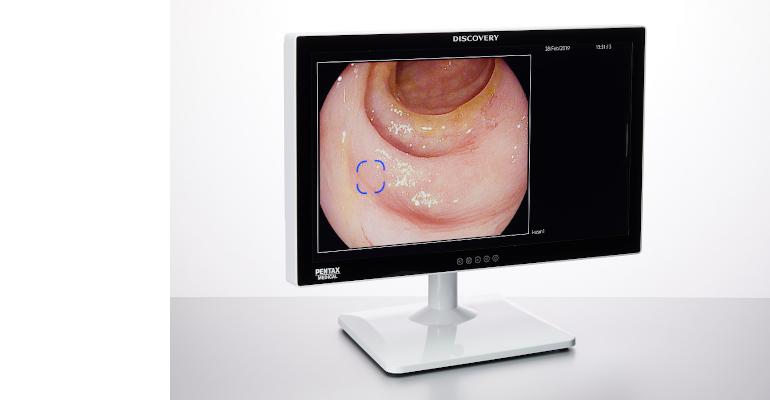 Discovery, developed by Pentax Medical and available in Europe, supports endoscopists in locating lesions they might otherwise miss, due to fatigue or distraction.

Although the survival rate for colorectal cancer can be up to 90% if it is detected in the local stage, those numbers decrease rapidly when the disease spreads—down to 10% for distant metastases. Fortunately, most deaths from colon cancer can be prevented using colonoscopy coupled with the removal of polyps.

But this strategy is not perfect, because sometimes so-called interval cancers are observed between the initial colonoscopy and the recommended follow-up procedure, explained Michael Haefner, head of the Department of Internal Medicine at Bregenz Hospital (Bregenz, Austria). His remarks were made in a recent webinar presented by Pentax highlighting the potential of artificial intelligence to increase colorectal polyp detection by using novel technologies.

Interval cancers account for 3% to 9% of cancer patients, Haefner said, adding that the adenoma detection rate (ADR) is inversely associated with the risk of interval colorectal cancer, advanced-stage interval cancer, and fatal invasive cancer. Each 1% increase in the adenoma detection rate is associated with a 3% decrease in the risk of colorectal cancer, he said. In general, the polyp miss rates range from 5 to 16.8%. Advanced adenomas are missed in 5.4% of cases, according to Haefner.

Numerous approaches have been studied to improve ADR, including high-definition endoscopes and virtual chromoendoscopy, third-eye retroscope, the FUSE system, the G-EYE endoscope, slim colonoscopies to allow for better retroflexion, and various caps and devices to flatten folds. However, there is considerable variation in individual ADR, suggesting that the human factor may be the most important variable, said Haefner. He acknowledged that the impact of workload and fatigue on the quality of the colonoscopy can be controversial, but it is definitely one important factor influencing ADR. The detection of flat lesions can be especially challenging for clinicians.

However, Haefner said AI has the potential to improve ADR and improve the risk of interval cancers. Pentax now offers the Discovery AI system, which detects both classic adenomas and flat lesions (serrated polyps) with a visual marker in real time. The device can distinguish features of serrated polyps, like a mucus cap or rim of debris, from residual stool. Polyps can be detected even at the very limit of the field of view and multiple polyps can be detected at the same time.

Discovery’s deep convolutional neural network (DCNN) is trained by experts using more than 116,000 images from approximately 280 patients with 788 polyps. Polyps are detected within 0.1s. Sensitivity is 90% in initial studies, according to Haefner. He also mentioned that users report experiencing neither fatigue nor lack of concentration after a long day of colonoscopies using the Discovery AI system.

The system is built in a flat monitor to provide a high usability as it can be used with any of Pentax medical video endoscopy systems to highlight potential polyps. The menu is self-explaining and uses an intuitive touchscreen interface.

Discovery has received the CE mark and is commercially available in Europe.