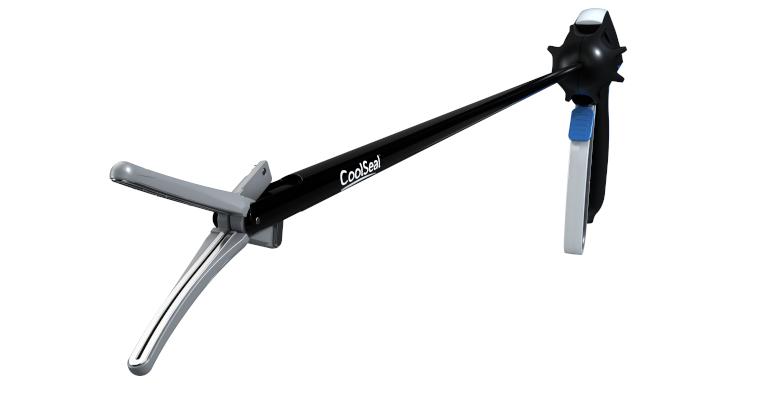 The CoolSeal Vessel Sealing platform from Bolder Surgical is now available in more than 20 countries globally after earning the CE mark in the European Union and PMDA approval in Japan. CoolSeal has been available in the United States since late 2020.

Tricia Strong, Bolder Surgical’s director of marketing, told MD+DI that the main differences between CoolSeal and other devices on the market are its energy delivery and its slim, dual-action jaw design. “The goal of CoolSeal was to create a true surgical instrument with the added capability of vessel sealing and cutting. CoolSeal has a narrower jaw tip with dual action dissection similar to high quality mechanical surgical instruments. The smaller jaw width for this precise tip requires a new optimized power delivery algorithm to ensure seal strength is equal to existing vessel sealing technologies.”

The system only delivers as much energy as is required to seal the tissue, Strong said. “The CoolSeal generator delivers only 35W for the Trinity device compared to up to 350W for other systems,” she explained. “By adjusting the energy delivery algorithm, seal times are faster than other devices even with a fraction of the traditional power delivery.  This is important because unwanted thermal spread to surrounding tissues is a function of seal time as well as temperature so fast seal times correspond to reduced spread of less than 1 mm on average.”

The portfolio was developed to offer surgeons options for the smallest patients to adolescents and adults, stated Robert Kline, President and CEO of Bolder Surgical, in the release. Added Dr. Satoshi Ieiri, pediatric surgeon, Kagoshima University Hospital: “Having successfully used the 3 mm vessel sealer for many cases in pediatric surgery, the Trinity 5 mm device is an excellent addition to my selection of surgical instruments. The slim, curved jaw design and added sealing capacity supports procedures on larger children, adolescents, and adults. It is a true all-in-one instrument that enables precise dissection and produces quick sealing times with minimal thermal distribution and great advantages.”