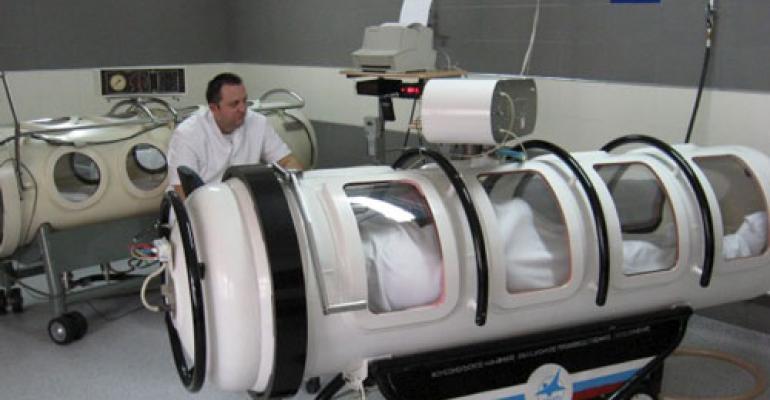 FDA has released a consumer report warning against improper use of hyperbaric chambers.

FDA has released a consumer report warning against improper use of hyperbaric chambers. Nayan Patel, a biomedical engineer in FDA's anesthesiology devices branch, says the agency has received 27 complaints over the last three years from consumers and healthcare professionals about treatment centers promoting hyperbaric oxygen therapy (HBOT) for uses outside of the 13 approved by FDA. “No, hyperbaric oxygen therapy (HBOT) has not been clinicially proven to cure or be effective in the treatment of cancer, autism, or diabetes,” says the opening statement of the report.

Because of inherent risks ranging from sinus and ear pain to air embolism and explosion, Hyperbaric chambers are regulated as Class II devices. The chambers work by increasing atmospheric pressure, which in turn allows patients to take in more oxygen than they normally would. The increased oxygen levels in blood can promote faster healing and fighting off infections. HBOT has been all the rage among athletes looking for faster recovery and enhanced performance.
FDA currently approves of HBOT for treatment of 13 conditions:
However, companies have been marketing HBOT for treatment of several diseases and conditions for which FDA says the safety and effectiveness of HBOT has not been established, including:
Indeed a cursory Google search reveals several clinics that are calling HBOT an alternative medicine along the same lines as acupuncture and recommend it for the treatment of autism, ADD, cerebral palsy, and as a fertility aid.
In a phone call to one of these clinics a representative  (who declined to be named) said that the clinic's marketing and claims adhere only to what FDA approves. Asked what would happen if a costumer came in seeking HBOT treatment for a non-FDA approved condition the rep said the decision for treatment would be at the doctor's discretion...it should be noted this particular center, in addition to other treatments, markets HBOT for “brain function restoration” including treatment of Alzheimer’s and Parkinson's.
Still the clinic's comments aren't entirely outside of FDA statements. “If you’re considering using HBOT, it’s essential that you first discuss all possible options with your healthcare professional,” Patel says in the report. “Whatever treatment you’re getting, you need to understand its benefits and risks. Your healthcare professional can help you determine which treatment is your best option.” ...Perhaps it all depends on your definition of “healthcare professional.”
While FDA has drawn a line in the sand, it remains to be seen whether this will be an issue the agency cracks down harder on in the future or whether warning letters have been a sufficient countermeasure thus far.