Image courtesy of University at Buffalo 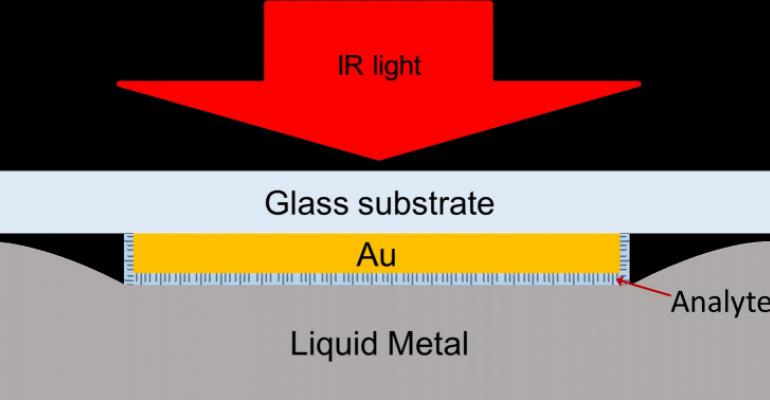 A University at Buffalo-led research team created a new surface-enhanced infrared absorption sensor, pictured above. It consists of several arrays of tiny rectangular strips of gold (Au) that are dipped in 1-octadecanethiol (analyte). There is a bottom layer of liquid gallium (Liquid Ga) and a top layer of glass. The design of the sensor, with its layers and cavities, creates what researchers call a “nanopatch antenna.”
Researchers at the University at Buffalo are developing a chip that combines nanoscale optical sensing and liquid metal to improve the success of molecular testing.

Point-of-care and at-home testing are powerful tools in guiding treatment and monitoring health conditions, and timeliness is key. Proof of concept research at the University at Buffalo could lead to nanoscale optical testing that is fast, highly sensitive, and examines a large sample area. Traditional optical sensors used in molecular testing rely on shining light into a nanoscale space, thereby enhancing the magnitude of the light. When a molecule is detected, a light spectrum is analyzed with spectroscopy and identified. However, catching that molecule in the space is up to chance with the existing technologies.

The university’s chip combines nanoscale optical sensing and liquid metal to improve the success of sampling. “We want to create these nanostructures that can funnel the energy of light into this very, very tiny nanometer-scale regions where light intensity is enhanced by orders of magnitude,” said Peter Q. Lui, PhD, assistant professor of electrical engineering at the University at Buffalo’s school of engineering and applied sciences. “That’s how we enhance detection of matter using light.”

The current optical sensor method, which uses semiconductors or metal, is limited by its fixed space, said Lui. “The conventional approach using solid metal-based nanostructures can achieve the high enhancement of light intensity, but these structures are so small it can make it difficult for the molecules to enter these structures. If you have certain target molecules in a solution, its only by chance that they can enter into a nanoscale region – that is the fundamental limitation of nanoscale structures.”

U at Buffalo’s technology improves upon the optical nano sensor with the addition of liquid metal, in this case gallium, which has a melting point at just above body temperature (86°F/30°C). With the flexibility of a liquid metal, Lui and his fellow researchers were able to create sensing areas around the molecules for testing.

Lui's and colleagues’ sensor is made up of a chip with gold nanostrips that serve as a base for the organic matter being tested; blood, saliva, or urine is applied, and molecules are absorbed by the nanostrips. A top layer of liquid gallium is added to cover the molecules, creating a “sandwich” and providing direct contact, according to Lui. “The reason we use liquid metal is it helps us to construct these nanoscale cavities for molecules. This essentially overcomes the tradeoff of having a small cavity and creating the light intensity but having a small cavity. The molecules are already in place before you create this nanoscale cavity.”

The would-be testing technology has the potential for medical and at-home use, according to Lui, who described the procedure as simple. Gallium also does not adhere to the sensor, theoretically allowing for reuse of the chip. The materials are also inexpensive, and the testing technology could be scaled at low cost, he said.

Liquid metal nanophotonic sensors also speed the process of testing as it only requires spectroscopy analysis, compared with biochemical testing, while retaining sensitivity. “The goal of our work is to develop nanophotonic sensors that have very high sensitivity but that are also specific when we target biomarkers,” said Lui, noting that specificity toward targeted biomarkers is being studied. Lui, who is also lead author on a study published in Advanced Materials, is working with another team in the University at Buffalo’s bioengineering department to verify the clinical applications of the sensing technology.

“In this work, we demonstrated a new type of nanophotonic sensors that could in the future be used to detect certain biomarkers to help diagnose diseases,” said Lui. The technology could identify spike proteins for diseases like COVID-19 or cancer biomarkers. “If you can detect biomarkers when their concentrations are very low that can help diagnose cancer in very early stages.” The technology, if successful, is expected to be integrated into medical devices.