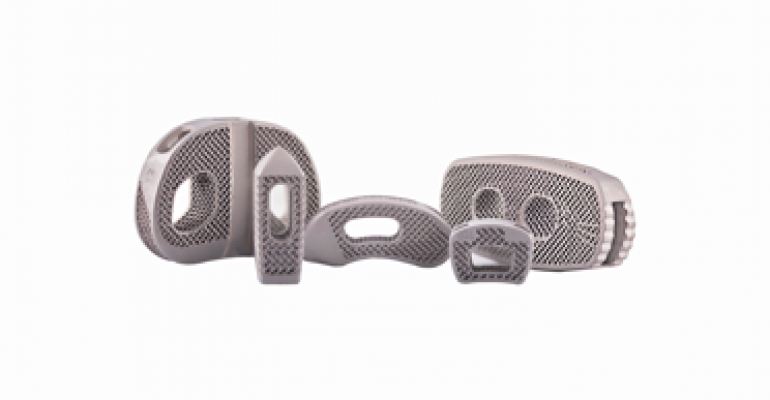 DePuy said its 3D-printed Conduit implants are 80% porous, enabling them to mimic the natural bone structure and facilitate spinal fusion. The Conduit implants also include a nanoscale surface roughness that may lead to an increase in adhesion of osteoblasts compared to conventional titanium materials; EIT cellular titanium material with a modulus of elasticity similar to cancellous bone; and clear visualization of the space in and around the implant both intra- and post-operatively on X-ray, CT scan, and MRI without significant interference as a result of the structure of the interbody cage.

Meanwhile, Globus Medical introduced its Hedron family of 3D-printed spacers. From an implant perspective, Needham & Co.’s Mike Matson said in a Sept. 27 report that this was the Audubon, PA-based company’s most significant introduction at NASS 2019.

“While [Globus Medical] is the leader in expandable spacers, it has lagged competitors in the 3D-printed titanium spacer category,” Matson said in his report. “[Globus Medical] plans to close this gap, however, with the launch of its Hedron family of spacers with initial FDA clearances expected in 4Q19.”

The analyst noted that the new implants incorporate many of the features of the company’s spacers that are not 3D printed.

“[Zimmer-Biomet] was one of the pioneers in porous metal implants with its Trabecular Metal spacers, which are made of tantalum as opposed to titanium,” Matson said. “But Trabecular Metal is radiopaque and we think that its compromised imaging limited its adoption in spine.”