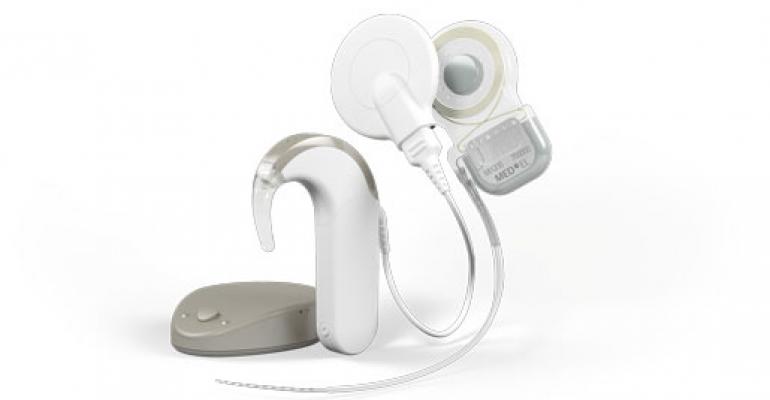 How Med-El designed the first FDA-approved cochlear implant that&#39;s conditionally safe for use with high-resolution 3.0 T MRI without requiring surgical removal of the internal magnet.

How Med-El designed the first FDA-approved cochlear implant that's conditionally safe for use with high-resolution 3.0 T MRI without requiring surgical removal of the internal magnet.

One example is the widespread use of MRI for diagnostics and monitoring, and implantable devices, such as pacemakers and cochlear implants. More than a decade ago, researchers at worldwide hearing implant manufacturer Med-El started thinking about the limitations of implants with magnets in a high-field MRI environment. This led to the idea of an implant with a magnet design fundamentally different from those used in cochlear implants over the past 30-plus years since cochlear implantation became the standard of care for treatment of significant hearing loss. In January 2015, the Synchrony cochlear implant from Med-El became the first and only implant to receive FDA approval as conditionally safe for use with high-resolution 3.0 T MRI without requiring surgical removal of the internal magnet.  Now commercially available, this R&D breakthrough means that cochlear implant recipients are able to access the latest 3.0 T MRI technology without the need for additional surgery.

Passive implants and implants of small size (e.g., stents) are often considered “MR safe,” whereas active implants (i.e., those containing electronics) and implants with electrode leads are typically “MR conditional” or “MR unsafe” at certain field strengths. “MR safe,” “MR conditional,” and “MR unsafe,” are terms according to ASTM F2503 (Standard Practice for Marking Medical Devices and Other Items for Safety in the Magnetic Resonance Environment). While “MR safe” would be safe under any circumstances, “MR conditional” means that it is safe to scan with such a device only if the specified conditions are followed. “MRI contraindicated” are those implants which are unsafe in MRI under any condition. Some may be safe at lower field strengths but unsafe at higher field strengths. Most pacemakers and cardiac defibrillators, for example, are MRI contraindicated.

Many other active implants (with or without a magnet) are “MR conditional.”  Each condition required for safe MRI scanning represents a limitation and a deviation from the standard procedures. This may include limitation in static and gradient magnet field strengths, MR sequences, RF energy deposited in the body (SAR value), type of MRI coils, position and orientation of the body, and preparation of the implant.  In the case of cochlear implants, for example, this would mean magnet removal or application of a head bandage.

Magnets are a central feature to cochlear implant devices, as they hold the external audio processor coil in place through the skin. The primary issue for patients with cochlear implants who undergo MRI is exposure of the internal magnet to a strong magnetic field, which can induce significant magnetic forces and cause serious problems.[1] Most cochlear implants are contraindicated for use with high field MRI with the magnet in place.

Complete surgical removal of the implant’s internal magnet is one way to address the problems posed by magnets in an MRI setting. Surgical removal of an implant’s internal magnet involves risks and quality-of-life considerations associated with any surgery. From a practical standpoint, the surgery center may not be at same location as the MRI center. Scheduling surgery on the same day as an MRI can add a layer of logistical complication for a patient in terms of anesthesia and driving. Additionally, surgical removal of the magnet means that MRIs are effectively precluded from an emergency situation, possibly leading to the utilization of less effective diagnostic devices.

Losing the ability to hear is also a practical concern for cochlear implant patients undergoing MRI; while the magnet is out, the recipient is separated from their ability to hear. The time from magnet removal surgery, to MRI, to the insertion of a sterile new replacement magnet after the scan is completed is one to three days in a best-case scenario. The out-of-pocket costs of the two surgeries (magnet removal and replacement) can also be added to the financial impact of time off work and the cost of the MRI scan itself.

One recent study published in JAMA Otolaryngology-Head and Neck Surgery of the three major coclear implant manufacturers (Advanced Bionics, Cochlear, Med-El), found that adverse events were reported only among Advanced Bionics and Cochlear patients. Complications included extreme pain; pain severe enough to stop the MRI, resulting in an incomplete image; internal magnet displacement; and even magnet flipping by 180° or reversal of the magnet polarization without physical magnet flipping.[2],[3] Other concerns included large artifact in the regions surrounding the implants. Overall, none of the patients showed displaced electrodes, demagnetized magnets, or any significant changes in auditory performance. However, due to several procedures involving magnet removal, magnet insertion, and cochlear implant reimplantation, one patient developed a postoperative wound infection requiring treatment with antibiotic medication and aseptic dressing. Notably, no patients with Med-El implants reported adverse events.[4]

Med-El broke new ground in 2013 with the FDA approval of Pulsar, Sonata, and Concert implants as conditionally safe with 1.5 T MRI without the removal of the internal magnet. Previously, the highest strength MRI one could undergo without the surgical removal of the magnet was 0.3 T.  Achieving 1.5 T approval was related to Med-El’s design, which featured a fixed (nonremovable) magnet that was unable to flip during the scan, along with careful patient positioning, so that the internal magnet was aligned with the magnetic field of the MRI unit to reduce torque. Meeting the challenge of a higher strength 3.0 T MRI electromagnetic field while leaving the internal magnet in place led to a number of revolutionary design changes in how the magnet is placed in the implant.

R&D was tasked to design a simple and robust solution that allowed MRI scanning under conditions that were less restrictive than with currently available implants. The aim was to develop an implant where the magnet could remain within the device in as many situations as possible even at 3.0 T MRI, and where the magnet only needed to be removed in a very small number of cases where image artifact in the vicinity of the implant would affect scan utility.

After initial design considerations and calculations, prototype models were built and tested in an MRI and the design was further enhanced. This phase included feedback from a small number of surgical advisors. Surgical tools for magnet removal and reinsertion were developed, and the surgical procedure was refined. Validation of these surgical tools was performed in cooperation with surgeons.

Design and material considerations were based on a detailed study of all interactions that can pose a risk in a high field MRI environment. At the same time, the “MRI-optimized” design was evaluated for aspects other than MRI. After all, the best implant design with regard to MRI safety would not be an ideal solution if it required much more surgical effort during implantation or if it reduced the performance of the implant in everyday life.

A fundamental design shift was the direction of magnetization of the implant’s internal magnet—diametrical instead of axial—and the fact that the Synchrony magnet can freely rotate within a hermetic titanium housing. During an MRI, Synchrony’s magnet freely rotates and self-aligns within its titanium housing, greatly reducing implant torque and the risk of demagnetization during scans.  The revolutionary conical design of the removable magnet housing also greatly reduces the risk of magnet dislocation or migration. The implant features a polymer-stiffening ring within the silicone implant body to further secure the magnet housing when the device is scanned with the magnet in place.

When a head MRI on the side of the cochlear implant is needed, Synchrony’s magnet housing can also be removed and substituted with a nonmagnetic spacer for MRI head scans with minimal image distortion in the implant area. The removable magnet housing features a protective coating to prevent unwanted cellular adhesion, simplifying the removal and replacement of the implant magnet. The incision for magnet exchange is made beside the implant, rather than directly over the implant, allowing uninterrupted hearing after the procedure to replace the magnet is complete and reducing the risk of scar tissue development directly over the magnet (where increased distance between the internal and external magnets due to scar tissue formation could potentially prohibit optimal magnetic attachment).

Today, more than half of MRI scans are performed on 1.5 T machines. As 3.0 T MRI technology replaces older 1.5 T units, MRI safety surrounding active implantable devices will become even more important in the near future. With current life span estimates nearing 80 years old, most children born today can reasonably expect to undergo at least one MRI in their lifetime.[5] With age comes the greater possibility for numerous MRI tests used to diagnose and monitor chronic conditions and diseases of aging such as heart disease, cancer, and neurodegenerative diseases.