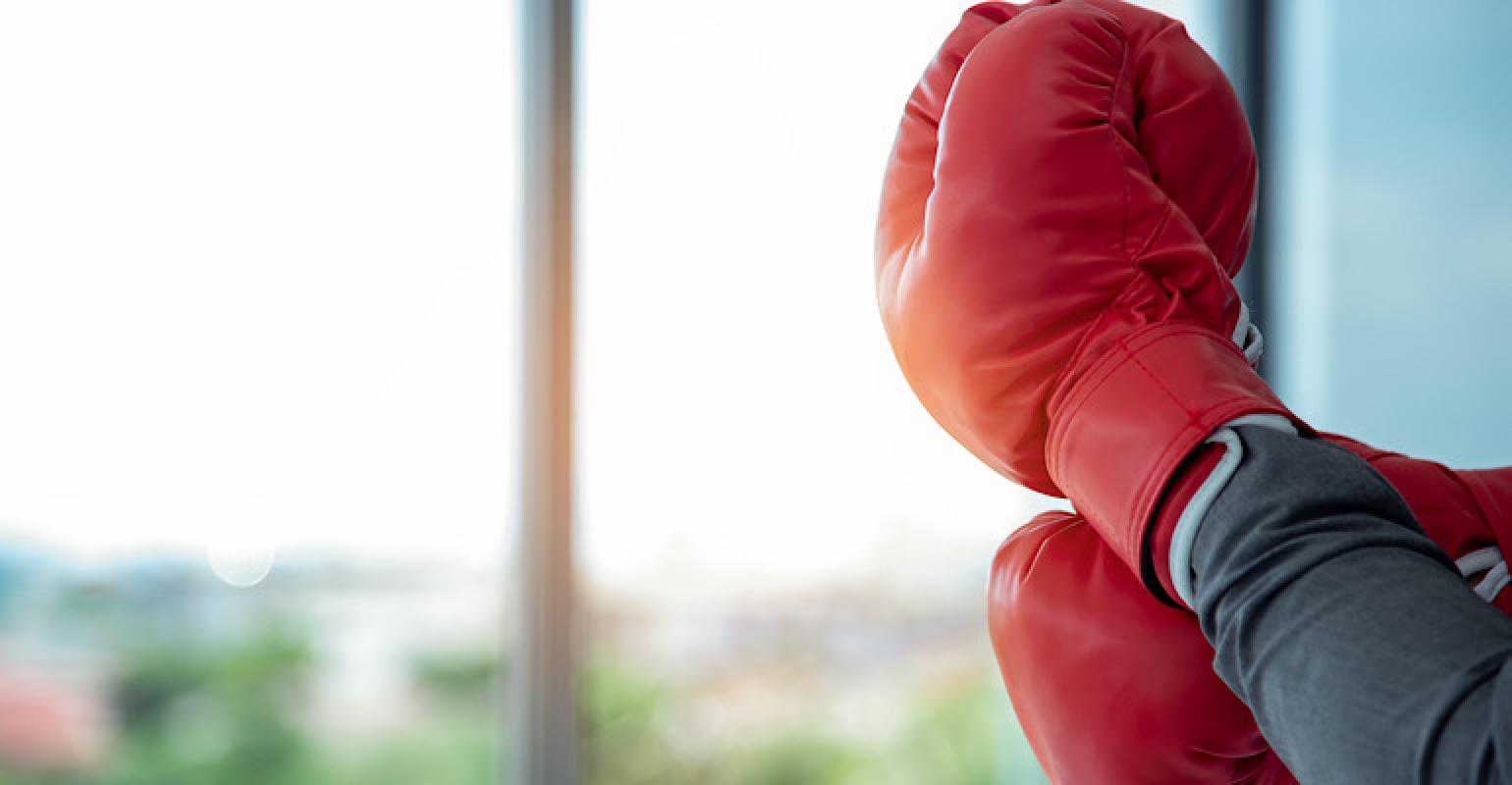 Medtronic Takes the Gloves Off in Patent War with Axonics

Medtronic isn't pulling any punches in its patent dispute with Axonics. Then again, neither is Axonics.

Medtronic and Axonics are at it again, and the gloves are definitely off now. To be fair, the proverbial gloves probably came off a long time ago, but the latest spat between the two companies makes it clear that neither is pulling any punches.

Here's a quick refresher on this story:

Here is the latest development in the story 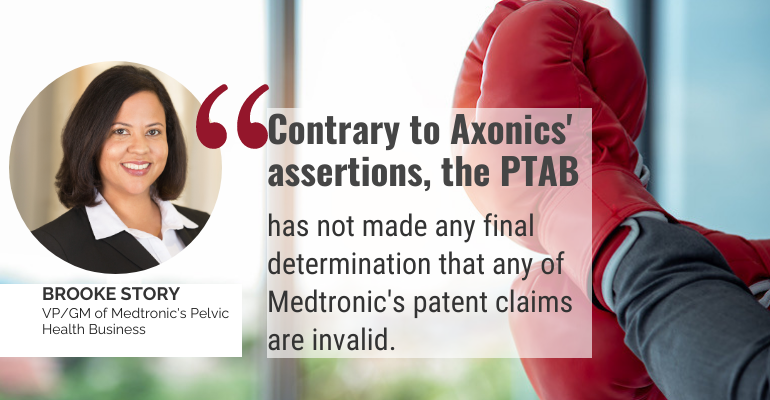 Axonics found out Wednesday that the Patent Trial and Appeal Board (PTAB) of the USPTO has decided to review the validity of six of the seven Medtronic patents in question. This means that the PTAB has reason to believe that at least some, if not all, of the claims in each of those six patents will be found invalid.

"They would not have issued the statement if they did not believe there was a 'reasonable likelihood that some if not all of the claims in those patents would be found to be invalid', Axonics CEO Raymond Cohen told MD+DI, emphasizing that he was quoting directly from the PTAB's statement. "We didn't just make this shit up."

However, the PTAB decided not to institute a review of one of the patents — (U.S. Patent No. 9,463,324 ('324 patent) — because there is not a reasonable likelihood that any of the claims in that particular patent would be found to be invalid. According to Medtronic, the '324 patent protects key technology related to implant recharging and temperature control and is central to the infringement case pending against Axonics.

Axonics issued a press release Thursday to update the market on the latest developments in the case.

"We put out a release, it wasn't filled with vitriol, I didn't make any inflammatory statements," Axonics CEO Raymond Cohen told MD+DI referring to the company's press release. "I just simply said that we're pleased that the PTAB instituted these petitions, and it means that Axonics has demonstrated that there is a 'reasonable likelihood that at least some, if not all, of the claims in each of the patents would be found to be invalid."

Medtronic followed up with its own press release on Friday.

"Frankly, it wasn't really a response [to Axonics' press release]," Brooke Story, vice president and general manager of Medtronic's pelvic health and gastric therapies business, told MD+DI. "We wanted to make sure that the market and our customers and our patients knew the results of the [PTAB]."

Story said that typically in cases like these the PTAB institutes a review of all of the patents in question. "So we were very excited about that and felt that was a big victory, and wanted to make sure that message was clear," she said. "For the other six patents ... we still feel really good about those patent claims, the fact that [the PTAB instituted a review on those patents] is not a decision. It just means that they're still up for review."

At least that's one point that both companies agree on.

"This is a nothing burger, which is why we didn't make a big deal about it," Cohen said. "We didn't claim victory, we just said we're providing an update on proceedings."

"Contrary to Axonics' assertions, the PTAB has not made any final determination that any of Medtronic's patent claims are invalid. The full IPR process will begin now, and the PTAB will issue a decision within the next 12 months," she said.

"I'm cracking up because they flipped this around and said, 'well we only lost six of seven, and it's really the seventh one that's the most important," he said. "...How can you have the PTAB say that six of your seven patents are presumed invalid and somehow you think that's a victory?"

Story emphasized, both in her interview with MD+DI and in Medtronic's press release, that the '324 patent is most important of the seven contested patents because it relates to implant recharging and temperature control. That patent, she said, is central to Medtronic's infringement lawsuit against Axonics.

What to expect going forward

Now that the PTAB has instituted a review of six of the contested Medtronic patents, the board has a full year to issue a decision on those patents.

"What I've heard from our legal team is we feel really good about our case ... we don't take these things lightly," Story said. "We wouldn't bring forward a claim if we weren't really confident about it."

Then Medtronic will need to make a decision as to whether or not it will go through with its patent infringement lawsuit against Axonics on whichever patents are ultimately found to be valid.

"If they choose to take this to court, if they chose to pursue this further, then we'll obviously present all the arguments that say, 'we're not infringing on your patent, we did it in a different way'," Cohen said.

Can't they all just get along? 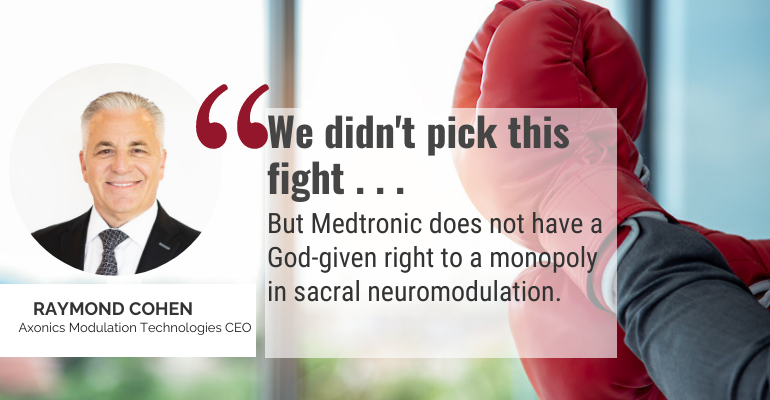 "We don't want to poke the bear," Cohen told MD+DI. "We just want to go out there and be successful as a company ... we didn't pick this fight, you know? But Medtronic does not have a God-given right to a monopoly in sacral neuromodulation."

There seems to be a perception among urologists, patients, and financial analysts that Medtronic had the capability to put out a rechargeable version of its InterStim implant, but without competition in the space the company became complacent and did very little innovation in sacral neuromodulation until Axonics came onto the scene. MD+DI asked Story how she responds to such frustrations.

Story has been leading the pelvic health business (part of the restorative therapies group) at Medtronic for almost two years. In December 2018 the company launched a smart programmer for the InterStim system that was intended to streamline multiple devices into a single, intuitive, touchscreen mobile device. This year, FDA approved Medtronic's InterStim Micro neurostimulator and InterStim SureScan MRI leads.

"I absolutely heard the feedback you're telling me, but what I will tell you is for the last six months I haven't heard that," Story said. "The customers I'm talking with are really excited about what we've done, and they are starting to have trust, I think, in me and my leadership team, and they're seeing all the innovation we have brought to the market. They love the fact that we have both a rechargeable and a recharge-free system. Axonics has brought one thing to the market."

Axonics does, however, plan to bring a recharge-free version of its SNM system to the U.S. market. The company also began shipping its second-generation implantable pulse generator (IPG) in August following a nod from FDA. The second-generation IPG is designed to extend the time between recharging intervals to once a month.