Image of an electroporation device courtesy of Minnetronix 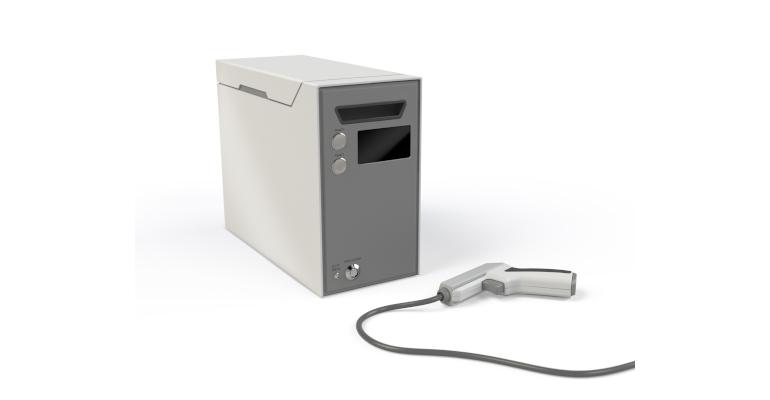 It is well understood that external electric fields can affect the integrity of cell membranes. This is due to an inherent difference between the electric potentials of the interior of a cell membrane compared with its exterior—this differential is called the transmembrane potential (TMP). Presence of a specific electric pulse near the cell can alter this transmembrane potential and, if the applied electric field is sufficient, nanopores can be created within the structure of that cell membrane. This effect of pore creation is known as electroporation or electropermeabilization. The process has been used for decades in industrial applications such as sterilization of water or milk and in laboratory applications such as gene research.

In recent years, however, there has been a drive to harness the attributes of electroporation for therapeutic purposes. Permanent tissue electroporation, where the membranes are irreversibly disrupted, can be very useful for tissue ablation. Its non-thermal effect can create relatively sharp ablation boundaries and avoid charring or large zones of viable but damaged tissue. The short process duration can also be very attractive when compared with that of traditional ablation methods such as RF thermal ablation or cryoablation. Irreversible electroporation has been clinically studied in electrophysiology and is in commercial clinical use for the surgical ablation of soft tissue.

Additionally, temporary electroporation can be used for intermittent modification of cells’ permeability. This allows for the transit of large molecules that could never normally cross a cell membrane and, when the electric field is switched off, the cell membrane reverts to its less permeable state. This method of molecular transport, called electrotransfection, can be used for the delivery of genetic material or large-molecule pharmaceuticals. Today, there are numerous gene therapy and oncology applications currently being researched.

For instance, it is known that immunization with a DNA vaccine consisting of naked plasmid DNA (pDNA) encoding the L1 region of the HOPV genome (pHOPV-L1) has an HOPV-associated cancer-suppressing effect. It has been shown that this cancer-suppressing effect can be intensified by low-voltage electroporation following inoculation. This technique can also be used to enhance chemotherapy efficiency by increasing membrane permeability for cytotoxic drugs.

And a third significant therapeutic application of electroporation is calcium electrotransfection, where the cancerous cell is temporarily permeabilized (reversible electroporation) to promote a large influx of calcium into the cell, resulting in cancer cell necrosis.

For all applications, animal research is typically used for early therapy development. One must be aware, however, that not only do electroporation field requirements differ between tissue types (liver, kidney, prostate, etc.) within a given species, tissue characteristics also differ between species. It is very important to have a quantitative understanding of these differences so therapies can more effectively be converted between use in various tissue types and to translate animal research into viable human clinical research parameters with greater confidence.

Beyond this complex tissue interaction, effectively engineering a reliable and effective system is also not trivial. Waveforms commonly cycle from 0 volts to thousands of volts within a few microseconds. And, at the end of each pulse, the voltage must drop back to zero within an equally short millionths of a second period for the desired electric field gradient. Tight waveform control is also critical for the creation of the desired field. This requires an architecture markedly different than a typical RF generator or nerve stimulator.

From a user perspective, it is critical that an electroporation system have built-in safety systems. Given the voltages required, it is imperative that the system be self-monitoring for both patient and physician safety.