Home>Product Development>Design & Engineering
Recent
Cue Closes on $235M Private Placement to Accelerate Growth
May 14, 2021
Your Phone or Smart Watch May be Messing up Your Pacemaker
May 14, 2021
Medtech in a Minute: Medtronic for the Win, and More
May 14, 2021
Tangible Solutions Expands to Meet 3D Printing Production Demands and More Supplier News
May 14, 2021 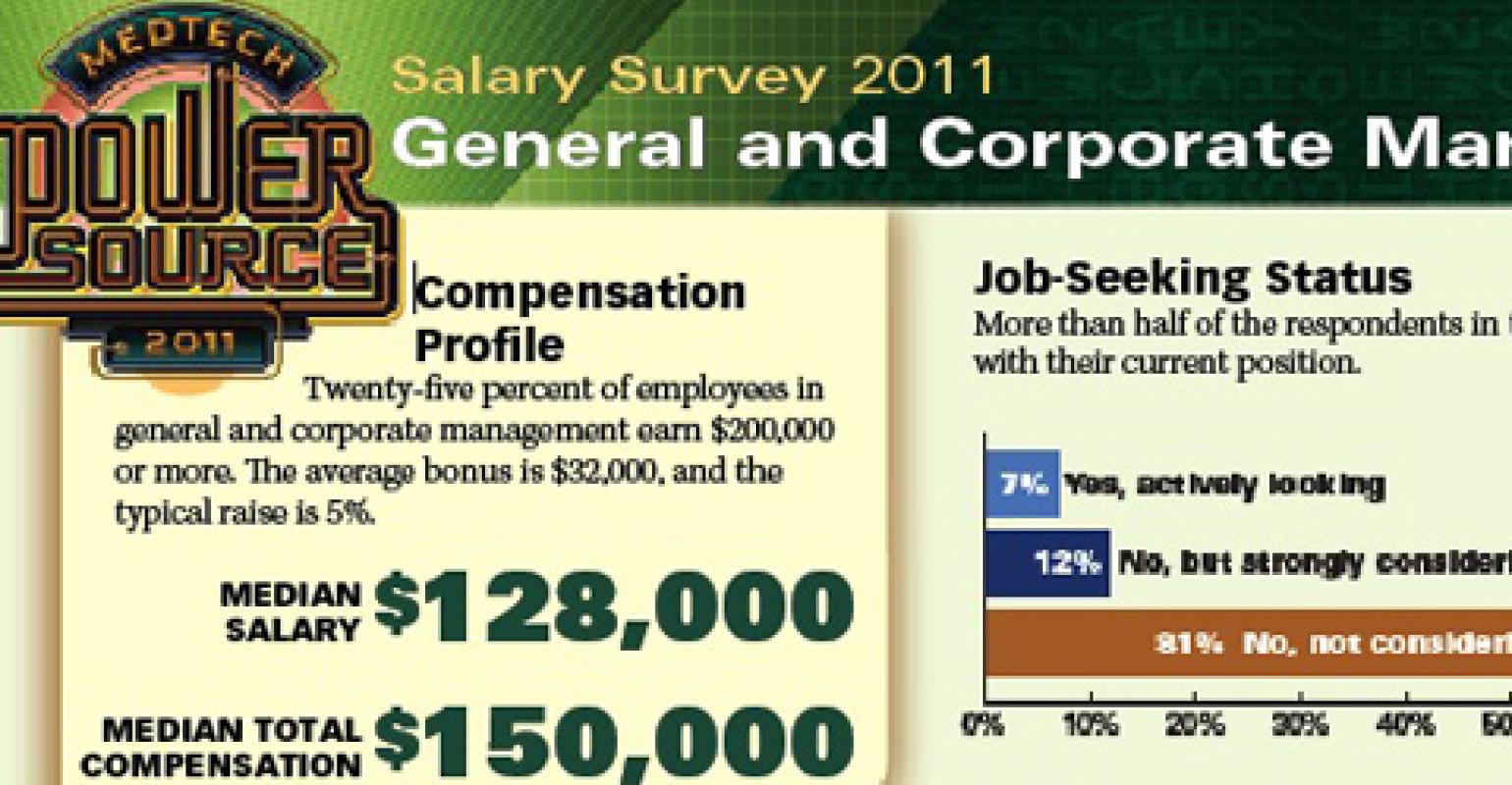 This article will tell you where you rank among your medtech peers; whether they are making more money than you, getting bigger bonuses, have been with their employers longer, or are happier in their jobs. When you boil it down to its core, we spend about 40% of our time at our jobs and, according to one expert, about 70% of our time thinking about our jobs. So we darn sure better be happy doing what we’re doing.

This article will tell you where you rank among your peers; whether they are making more money than you, getting bigger bonuses, have been with their employers longer, or are happier in their jobs. When you boil it down to its core, we spend about 40% of our time at our jobs and, according to one expert, about 70% of our time thinking about our jobs. So we darn sure better be happy doing what we’re doing.

Before we get into the results, let’s define the parameters. The survey sample of 1,635 people was selected at random from the MD+DI domestic subscriber list. Readex Research (Stillwater, MN), an independent research company, conducted the study (see the sidebar "Methodology.") Data were collected via mail from July 13 to August 24, 2011. The survey was closed for tabulation with 482 usable responses (a 29% response rate). Of those responses, 398 people indicated that they are involved in the medical device industry and work full time with finished medical device manufacturers and in vitro diagnostic manufacturers. There is a fairly equal split of people in R&D, product design engineering, production and manufacturing, quality control and quality assurance (QA/QC), regulatory and legal affairs, and general and corporate management.

Let’s get back to job satisfaction. Whether or not we’re happy in our jobs was one of the more eye-opening aspects of this year’s study. We asked, “How satisfied are you with your current position?” Last year, 28% of respondents gave the highest grade (a 5 on a scale of 1–5) to job satisfaction. This year, only 23% gave a 5. That’s a significant drop-off. Those 5% moved to the middle-of-the-road category, as the grade of 3 went from 21% last year to 26% this year.

I discussed this lack of higher satisfaction with Joe Mullings, president and CEO of the Mullings Group (Delray Beach, FL), a recruiting company in the medical device industry. “I’m not surprised that people’s satisfaction with their jobs has gone down," he says. "In general, what happens in your life carries over to your job. And in general, this country is ticked off. Whether you’re ticked off because your mortgage payment is too high or you just don’t have enough money at the end of the month, it still carries over into your job satisfaction. It definitely has less to do with the device world and has more to do with general life outside the four walls of where you work.”

Drue DeAngelis, a managing partner at the DeAngelis Group (Scottsdale, AZ), agrees that there’s a general malaise in the industry with a lot of the major OEMs announcing layoffs. “Status quo doesn’t cut it anymore, especially as ASPs [average selling prices] are coming down," he says. "And the government’s regulatory process is making it more difficult, which, in turn, is making even more uncertainty. The people who are resistant to change are the ones that will have the most difficult time.”

Another contributing factor to the lack of job satisfaction is that there are fewer jobs for those unsatisfied people to move to. “In the past, people may have stepped out on the ledge and tried something new," Tom Johasky of Medical Device Recruiters (Fort Lauderdale, FL) says. "Today’s thought process is more, ‘I’m happy to have my job, and I’ll do what they tell me to do.’" Another reason Johasky says people aren’t as happy as they were in the past is that medical device companies aren't expanding at the rate they did prior to 2008–2009. "Employees are being asked to do way more than they did and produce more than they ever did in the past with fewer people.”

A consenting opinion comes from Roger Brooks, president and CEO of Leading Edge Medical (Boulder, CO). “My read into job satisfaction is that when someone is dissatisfied with their job, they leave and get another one," he says. "But that’s just not possible today because there aren’t other jobs out there to go to. So people are forced to stay with their current jobs, and not be happy about it.”

Speaking of longevity, 60% of respondents have been with their current employer for more than five years. The feelings about job security haven’t changed at all since last year. The largest group, 66%, say that they feel about the same as last year.

The next question we asked is, “Are you currently looking for a job outside your organization?” The biggest increase came from “No, but strongly considering a new job search.” That response went from 22% last year to 27% this year.

There was a time, not too long ago, when taking a position with a start-up company conjured up visions of stock options, paying for the kids’ education, Lamborghinis, retirement, and buying bigger houses. That’s not the case anymore. However, the enticements those companies are offering sometimes comes in the form of higher salaries.

According to Mullings, “The statistics say that start ups are not transacting nearly at the pace that they were back in the heyday years. And when they do transact, only the officers or the high-end personnel—VPs and above—are realizing reasonably game-changing money north of $1 million. By the time preferences are paid on the venture capitalists, there’s not a lot left over.”

But again, potential salaries at a start-up tend to be higher. The reason for this is that start-ups almost always recruit the top talent, the “stars.” These people are commanding more money. Keep in mind that only about 20% of the people at these start-ups—companies in the “below $10 million range”—are getting things like 401(k), vacations, and other benefits, while the larger, established companies almost always offer these perks and more.

It doesn’t sound like the dream job, so why would someone join a start-up? “What you will get as an employee at a start-up is the full scope of experience, more control of your future, more exposure, and generally a higher level of enjoyment out of getting up out of bed every morning and being fired up," Mullings says. "The DNA in the individual that’s drawn to that type of environment will run to it. The DNA of the individual who is sitting in the big-box company will not get perked up by it.”

Job Security Might Be a Thing of the Past

How about job security? According to the survey, that hasn’t changed much over the past year. That's actually a little bit surprising, when you consider some of the recent news about layoffs. People who worked for the super-size OEMs probably thought their jobs were safe. But the days of being able to hide in your cubicle are long gone. So whether you’re talking about a start-up, where the CEO has more to do with job security than anything else, or the big guys, the risks are there in both cases.

“The hiring cycles have been more cyclical this year than they were in 2010,” Johasky says. “[Last year] was more of a straight line up, and 2011 has seen more of a wave of peaks and valleys. At this point, I see more companies doing more with less, not replacing people unless they are critical positions to the organization. And when they are hiring, they’re looking to keep within an assigned budget for the salary grid they are working in. I don’t see them going off the chart and saying, ‘This is an outstanding candidate. What will it take to get him on board?’”

Now let’s get to the real heart of the matter. Thirty two percent of the respondents thought that their compensation was “too little,” a number that’s up 4% from last year. The “about right” category fell from 71% to 67%. The bottom line is the number of people who think they are compensated fairly is going down.

When I first shared the study results with Mullings, he jumped all over the fact that the stars—or “A players,” as he calls them—are still commanding significant salaries. “We deal with a few big companies. They’re constrained by salary requirements. So when they come to me with a specific salary guideline, I have to work with that," he says. "But when a start-up comes in, while they use the same ranges, they’re much more likely to go over the range if I can provide them with a game changer.”

Johasky says that it may not be the salary levels specifically that people aren’t happy with. “More now than ever, as I talk to people that are employed, more people tell me that their bonuses have been taken away or their compensation packages have changed," he says. "And more people have said in the last year that there is a bonus percentage out there, but forget about getting all of it."

Stryker recently announced a 5% for reduction of its workforce, citing the medical device excise tax as a deciding factor. The tax is scheduled to begin in 2013. What sort of impact will this have if the other major OEMs follow suit? Next year’s study could be far more interesting than this year’s study.