Can You Imagine a Pacemaker That Does Its Job, Then Pulls a Houdini? 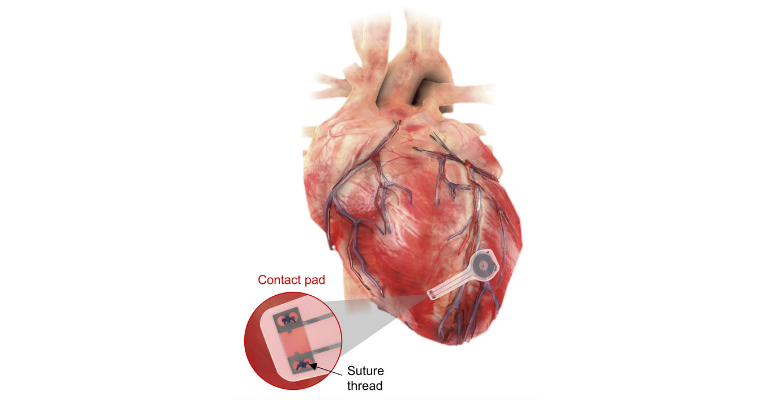 Researchers have developed the first-ever transient pacemaker — a wireless, battery-free, fully implantable pacing device that disappears after it is no longer needed.

We've heard of bioresorbable stents and scaffolds, and there has been a lot of talk in recent years about using bioresorbable polymers for medical devices. But researchers at Northwestern and George Washington (GW) universities have taken bioresorbable medical devices to a whole new level with the development of a transient pacemaker that disappears after it is no longer needed.

The thin, flexible, lightweight device could be used in patients who need temporary pacing after cardiac surgery or while waiting for a permanent pacemaker, the researchers say. All components of the pacemaker are biocompatible and naturally absorb into the body’s biofluids over the course of five to seven weeks, without needing surgical extraction.

The device wirelessly harvests energy from an external, remote antenna using near-field communication protocols — the same technology used in smartphones for electronic payments and in RFID tags. This eliminates the need for bulky batteries and rigid hardware, including leads. Not only can leads introduce infections, they also can become enveloped in scar tissue, causing further damage when removed.

The study was published June 28 in the journal Nature Biotechnology. The paper demonstrates the device’s efficacy across a series of large and small animal models.

Below is a layered schematic of the device, courtesy of Northwestern University. 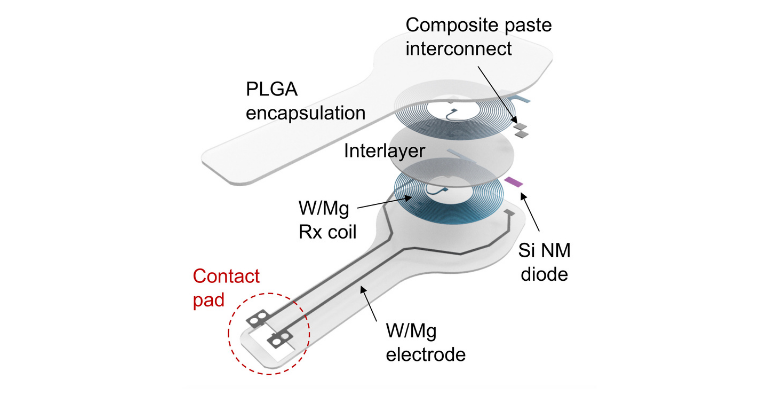 “Hardware placed in or near the heart creates risks for infection and other complications,” said Northwestern’s John A. Rogers, who led the device’s development. Rogers is the Louis Simpson and Kimberly Querrey Professor of Materials Science and Engineering, Biomedical Engineering and Neurological Surgery in the McCormick School of Engineering and Feinberg School of Medicine and the director of the Querrey Simpson Institute for Bioelectronics. “Our wireless, transient pacemakers overcome key disadvantages of traditional temporary devices by eliminating the need for percutaneous leads for surgical extraction procedures — thereby offering the potential for reduced costs and improved outcomes in patient care. This unusual type of device could represent the future of temporary pacing technology.”

Rishi Arora, MD, a cardiologist at Northwestern Medicine who co-led the study, explained that sometimes patients only need pacemakers temporarily, and after the heart is stabilized, the device is removed.

“The current standard of care involves inserting a wire, which stays in place for three to seven days. These have potential to become infected or dislodged," said Arora, a professor of medicine at Feinberg, and co-director of the Center for Arrhythmia Research.

GW's Igor Efimov, who co-led the study with Rogers and Arora, said the technology opens an entirely new chapter in biomedical research.

“The bioresorbable materials at the foundation of this technology make it possible to create whole host of diagnostic and therapeutic transient devices for monitoring progression of diseases and therapies, delivering electrical, pharmacological, cell therapies, gene reprogramming and more," said Efimov, the Alisann and Terry Collins Professor of Biomedical Engineering at GW.

With this leadless biocompatible pacemaker, the circuitry is implanted directly on the surface of the heart, and can be activated remotely, Arora said. The device then "dissolves" on its own, avoiding the need to surgically remove the pacemaker electrodes. The development of this device could represent a major victory for post-operative patients, Arora said.

“With further modifications, it eventually may be possible to implant such bioresorbable pacemakers through a vein in the leg or arm,” he added. “In this instance, it also may be possible to provide temporary pacing to patients who have suffered a heart attack or to patients undergoing catheter-based procedures, such as trans-catheter aortic valve replacement.”