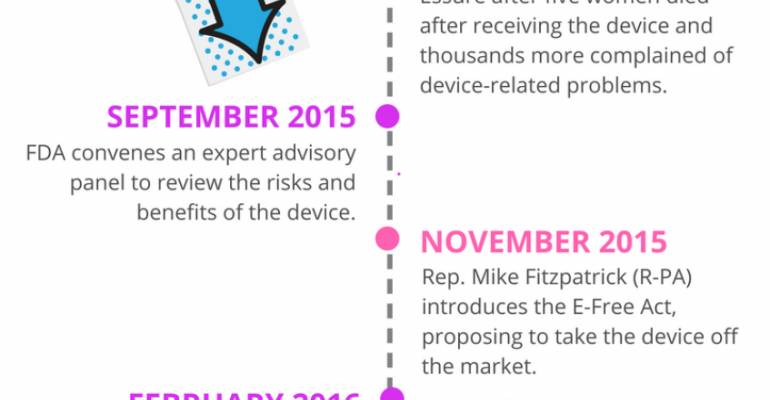 The agency called the post-market surveillance study of the controversial birth control device “adequate.” Only 307 women have been enrolled in the Essure arm of the study.

FDA recently updated its Essure website to include an analysis of medical device reports received in 2018.

As in 2017, most of the reports FDA received about Essure last year were submitted by Bayer and are related to litigation against the company. Most of the reports mention potential device surgical removal, the agency noted.

Bayer discontinued the Essure device at the end of 2018, making it tough to reach the study’s initial sample size because it relied on enrolling patients who were newly implanted with the device until May 2020. To account for lower enrollment, FDA said it worked with Bayer on a revised study plan to provide more long-term information regarding complications that may be experienced by patients, despite reduced enrollment.

The revised study protocol requires participants to be followed for five years to provide longer-term information on the risks of the device, including issues that may lead women to have the device removed.

FDA noted that healthcare providers are allowed to continue implanting Essure for up to one year from the date the device was purchased, which means some Essure devices may be available until December 2019. Bayer is required to continue enrolling new study participants as long as the device is still being used in the United States.