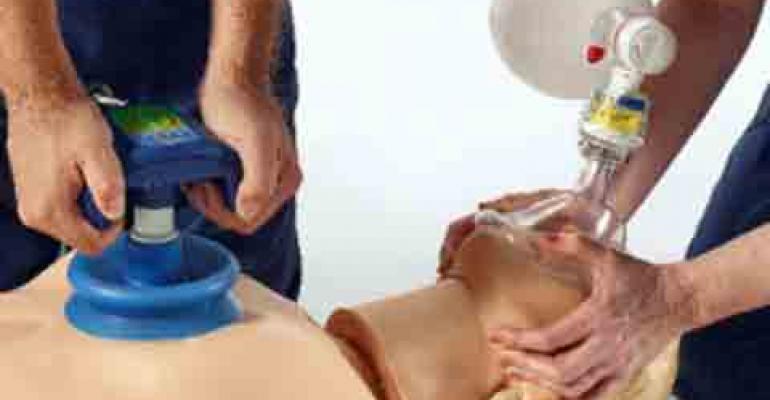 The ResQCPR System has been shown to increase survival in cardiac arrest patients.

A cardiopulmonary resuscitation (CPR) system that received FDA premarket approval this week could take the life-saving therapy of CPR one step further. In a pivotal trial, the patient group that received therapy from the ResQCPR System showed a 49% increase in survival at one year versus a control group that received conventional CPR.

This is especially meaningful with statistics like the approximately 300,000 cardiac arrests outside of hospitals each year in the United States, according to the Centers for Disease Control and Prevention (CDC).

Dr. William Maisel, acting director of the Office of Device Evaluation in FDA’s Center for Devices and Radiological Health, praised the ResQCPR System in the agency’s approval announcement. “Most people who suffer cardiac arrest outside of a hospital die. The ResQCPR System may increase oxygenated blood circulation during CPR, which in turn may improve the likelihood of survival in adult patients with out-of-hospital, non-traumatic cardiac arrest,” Maisel said in the release.

The ResQCPR System is a two-part system that uses what the maker calls its proprietary “Intrathoracic Pressure Regulation” therapy. The ResQPump Active Compression Decompression CPR Device fits onto the chest with a suction cup, giving the person administering the therapy the ability to push and lift the patient’s chest. In standard CPR, the helper cannot lift the patient’s chest. The chest device also has a pressure gauge and timer to help administer the recommended compression depth and rate.

The ResQPod 16.0 Impedance Threshold Device is placed on the patient’s face mask or breathing tube, preventing airflow into the chest during decompression. This allows more blood to be drawn back to the heart. Preloading the heart with more blood may result in more blood being pushed out of the heart with the next compression and increased circulation of oxygenated blood.

The system was the subject of the ResQTRIAL pivotal study, which was a randomized clinical trial that compared 842 cardiac arrest patients who received ResQCPR therapy against 813 patients who receive conventional CPR therapy. More ResQCPR patients survived cardiac arrest. According to a press release from the device maker, the ResQCPR patient arm had a 49% increase in survival at one year over the control arm. Adverse events were similar between the system and conventional CPR, with the exception of pulmonary edema—fluid buildup in the lungs—being seen more often with ResQCPR. Last May, FDA's Circulatory System Devices advisory panel voted favorably on the system.

The trial investigator, Dr. Tom Aufderheide, said in a company press release, “This is the most significant advance in the field of cardiac arrest since defibrillation. The ResQCPR System profoundly increased blood flow to the heart and especially the brain in pre-clinical studies. The ResQTRIAL showed it could save thousands of lives each year in the United States and, in my opinion, should become a new standard of care.”