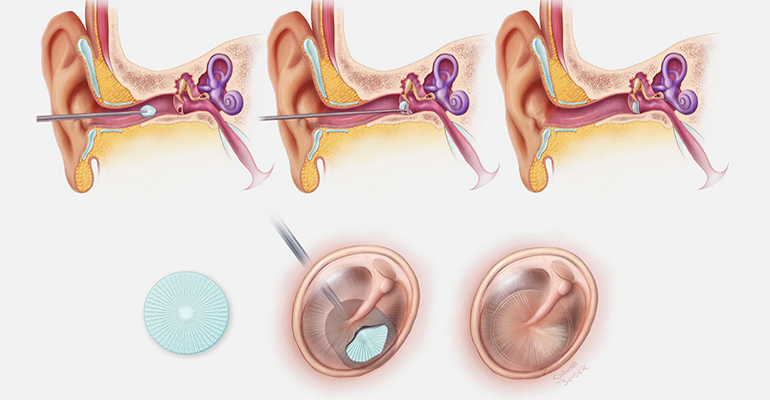 The PhonoGraft device is installed through the ear canal using a noninvasive endoscopic procedure. Once installed, it initiates the regeneration of native eardrum tissue (bottom row). Illustrations by Shawna Snyder.
PhonoGraft technology could enable permanent repair first by mimicking and then restoring the eardrum’s sound-conducting mechanical properties and barrier functions.

A 3D-printed polymer-based implant that could be used to repair a damaged eardrum is entering commercial development. The PhonoGraft hearing-restoration technology was developed by researchers at Harvard’s Wyss Institute for Biologically Inspired Engineering, Harvard John A. Paulson School of Engineering and Applied Sciences (SEAS), and Massachusetts Eye and Ear (MEE). If clinical development of the technology is successful, it could mitigate the pain, drainage, and hearing loss associated with eardrum perforations that affect millions of individuals worldwide.

Eardrums can become perforated by blasts, traumatic injuries, and chronic ear infections, and many of those perforations require reconstructive surgical procedures using tissue grafts harvested from the patient. Even with modern techniques, surgical failures are common, and many patient-derived tissue grafts have imperfect sound-conducting abilities, writes Benjamin Boettner on the Wyss Institute news page. PhonoGraft technology uses a novel biomaterial-based approach that guides the regeneration of native eardrum tissue. Its 3D-printed structure mimics the structure of a normal eardrum and stimulates the tissue’s self-healing properties, as demonstrated in animal models. The research team believes the PhonoGraft material technology — unlike other methods — could potentially enable permanent repair first by closely mimicking and then restoring the eardrum’s sound-conducting mechanical properties and barrier functions.

To bring this technology to patients, entrepreneurial members of the research team launched Beacon Bio, with an exclusive license from Harvard’s Office of Technology Development (OTD) to commercialize the PhonoGraft innovations co-owned by Harvard and Mass General Brigham. Beacon Bio was acquired this summer by California-based Desktop Health, a healthcare business within Desktop Metal Inc. that focuses on 3D printing and biofabrication technologies for personalized medicine. Nicole Black, PhD, who was CEO of Beacon Bio, will continue to lead the platform as Vice President of Biomaterials and Innovation at Desktop Health.

“In the wake of the Boston Marathon bombing on April 15, 2013, many of the eardrum perforations were cared for at Mass Eye and Ear,” said MEE researcher and surgeon Aaron Remenschneider, M.D., M.PH., who participated in developing PhonoGraft technology. “It was really a catalyzing event that prompted us to look more systematically at our surgical techniques, grafting material, and outcomes, which eventually made us focus on improved eardrum grafting materials to promote better healing and hearing outcomes after eardrum repair,” he told Boettner.

“Ear surgery has seen a lot of advances over the last 10 years. An important one has been the development of endoscopic procedures that allow us to treat patients directly through the ear canal, which in many cases avoids skin incisions and drilling behind the ear,” added Elliott Kozin, MD, an otologist and neurologist at MEE and assistant professor at HMS. This approach, together with innovations from the SEAS lab of Jennifer Lewis, where the technology was initially developed, “enabled us to imagine, design, and ultimately manufacture a device that may one day improve the outcomes of eardrum surgeries,” said Kozin.

As they pursued the research, 3D printing emerged as the only technology that could replicate the intricate biological structure. “To create a truly regenerative graft that mimics the circular and radial collagen pattern of the tympanic membrane . . . while simultaneously matching the acoustic and mechanical properties of native tympanic membranes, was a grand challenge,” said Lewis. “These grafts must be 3D printed to truly recapitulate these complex features and functionality.”

Initial attempts to print devices using silicone did not achieve the desired combination of easy implantation and cell-supporting, sound-conducting, and biodegradable properties. The researchers invented a synthetic polymer-based ink system for soft tissue repair that could be aligned during 3D printing. In vivo trials conducted on a chinchilla were a resounding success.

“Three months after implanting our optimized graft into the chinchilla’s ear, we had a genuine eureka moment. The hearing tests indicated full restoration of sound conduction, which has been a big hurdle. Then we took our first peek down the ear canal with the endoscope,” said Remenschneider. “What we were seeing was merely the ghost of our graft that was being replaced with new tissue — a beautifully reconstructed eardrum with its radial-circular pattern.” The different cell types of the tympanic membrane and a vascular system for blood support had aligned along the patterned polymer fibers and integrated into a functional tissue. Also, no signs of infection were visible in the reconstructed eardrum, writes Boettner.

Desktop Health is now focused on obtaining FDA clearance for the PhonoGraft device.