Why Size Matters When It Comes to Medical Devices

A one-size-fits-all approach can be dangerous for certain implantable medical devices.

"If it doesn't fit, you must acquit," defense attorney Johnnie Cochran told jurors in 1995, referencing the infamous bloody glove that would not fit on accused murderer O.J. Simpson's hand. While Simpson would later be found liable in a separate wrongful death suit, Cochran's argument helped lead to a not guilty verdict in the case, often referred to as the "trial of the century."

Size can be a crucial consideration when it comes to medical devices as well--especially implants. In the field of orthopedics, the use of the wrong sized implant can lead to a whole host of problems, ranging from soft-tissue irritation, impingement, poor function, and secondary operations. Labeling problems can sometimes cause confusion among orthopedic surgeons. This problem, for hip and knee arthroplasty components, is associated with poor patient outcomes and $36 million in wasted spending each year, according to a study cited by AAOS.

In addition, size can also affect FDA's classification of device class. For example, a metal-on-metal (MoM) shoulder replacement device is a Class II device, while a MoM hip replacement device would be a Class III device, under a 2013 FDA proposal, requiring a substantially higher level of regulatory controls. While both devices share similar ball-and-socket technologies, modifications must be made to the physical construct in order to fit the specific anatomy.

Likewise, spinal fusion cages used to replace a disc (interbody cage), or vertebra and adjacent discs (vertebral body replacement cage), are engineered in specific sizes and shapes designed to fit the unique anatomy of the three spinal regions of the spine. What works in one area of the spine, won't work in another.

An estimated 3-8% of spinal fusion and total disc replacement procedures must be surgically revised. Many of these revision surgeries are a result of the use of an improper selection, sizing, or placement of implants, according to the book Nervous System Diseases: New Insights for the Healthcare Professional: 2013 Edition.

PubMed, Medline, Embase, and U.S. Patent databases demonstrate that cervical spinal cage geometries include lateral widths ranging between 12-20 mm, depths ranging between 12-16 mm, trapezoidal endplate footprints, and wedged-shaped profiles to conform to the cervical lordotic spinal curvature. The size and shape of the vertebra in the thoracic and lumbar spine differ greatly and also have specific biomechanical behavior unlike that of the cervical spine.

For example, the NuVasive X-Core VBR K142205 was cleared only for use below the neck in the thoracic spine (where the spinal curvature is the opposite of that found in the cervical spine), and for use in the lumbar spine, which is about three times larger than the vertebra in the cervical spine. It's rectangular endplates in footprints of 18 × 30, 18 × 50, and as large as 22 × 60 mm sandwich 18 or 22 mm telescopic columns designed to resist subsidence specifically in the thoracolumbar spine.

The cervical vertebrae, are more box-shaped. Modifications to the X-Core for cervical corpectomy include upper and lower endplates with smaller footprint dimensions measuring 15 × 12, 17 × 14, 19 × 16 mm that sandwich a 12 or 14 mm diameter telescopic column designed to fit into the cervical spine.

Implanting an undersized or oversized cage into the spinal column can result in footprint and curvature mismatch, which leads to cage subsidence, biomechanical instability, and spinal misalignment. Spinal cages designed for use in the cervical spine are too small to fit the thoracolumbar spine. A study published in European Spine concludes: "Undersizing the prosthetic device may lead to subsidence, loosening, heterotopic ossification, and biomechanical failure caused by an incorrect center of rotation and load distribution, affecting the facet joints." Likewise, cages designed for use in the thoracolumbar spine are too big to fit into the cervical spine. In other words: if the cage doesn't fit, it isn't legit.

Every medical device is also required to be packaged with adequate directions for use. The U.S. instructions for the X-Core provides warnings that the device is "intended for use only as indicated" (in the thoracolumar spine T1 to L5). But the identical X-Core device marketed in Europe/Middle East/Africa directs use into the cervical and thoracolumbar spine (C3-L5). A device that is not labeled for its actual intended use or is misleading, false, or lacks warnings for unapproved uses would be misbranded (mislabeled) according to FDA regulation.

Modifications to a previously cleared or approved device that changes the intended use requires manufacturers to notice the FDA pursuant to 21 C.F.R. 807.81 (a)(3)(ii), and also obtain an approved application for premarket approval (PMA) as required by 21 U.S.C. § 360e(a), or investigational device exemption (IDE) as pursuant to 21 U.S.C. § 360j(g). In the absence of FDA notification or having a PMA or IDE in effect, the subject device would be deemed adulterated and misbranded. Such violative products are prohibited to be sold into commerce or exported. 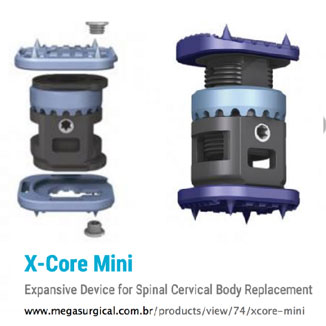 On June 18, 2015, FDA announced a crackdown on sales of unapproved and uncleared medical devices being sold online outside of the United States. The international sting operation was code-named Operation Pangea VIII. "Our efforts to protect the health of American patients by preventing the online sale of potentially dangerous illegal medical products will not cease," said George Karavetsos, director of the FDA's Office of Criminal Investigations.

Coincidentally, on the same day of FDA's sting announcement, the Center for Devices and Radiological Health (CDRH), the FDA division that oversees medical devices, received NuVasive's 510(k) application K151651 for the X-Core Mini. Less than a month later, while CDRH reviewers were still considering NuVasive's 510(k) application to expand the device's use to include the cervical spine, another branch of the FDA, the Office of Surveillance and Biometrics, received an adverse event report for the product.

The July 15, 2015 report submitted by NuVasive describes a device that had subsided into a patient's C3 vertebra causing injury requiring revision surgery. Subsidence is when the device sinks or pistons into adjacent vertebrae. No details of the injury, other than a revision surgery performed to replace the device, was reported. Neurologic structures in the neck control the hands, arms, legs, and diaphragm. Any injury caused by device failure in the anatomic proximity of the cervical spine can be catastrophic.

FDA requires that adverse events be reported by the manufacturer within 30 days. According to FDA's records, NuVasive did not report the patient's cervical injury, which occurred in April 1, 2013, until July 16, 2015.

The X-Core ancestry and regulatory history raises questions about FDA's current thinking on corpectomy devices, device design, intended use, substantial equivalence, post-market surveillance, and the marketing of medical devices that have undergone modifications or have been designed for intended uses not approved or cleared by FDA.

While off-label use permits surgeons to use approved or cleared medical devices in any manner they see fit, the NuVasive X-Core constructs include cage geometries designed for use only in the cervical spine, yet the FDA apparently cleared the product initially as a non-cervical device.