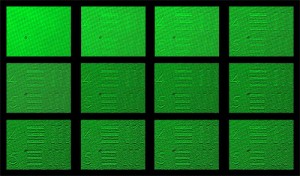 By adjusting an electrical voltage across a crystal of nonlinear material, the researchers recovered an image of lines and numbers that originally was hidden in noise (upper left). As they tuned the system (from left to right across each row from top to bottom), the image "stole" energy from the noise, first appearing and then degrading as they adjusted past the optimal voltage. (Images: Jason Fleischer/Dmitry Dylov)

Engineers at Princeton University (Princeton NJ) have developed a technique for revealing images of hidden objects, such as human tissue, by clarifying the images using light rays that normally make them unrecognizable. One day, the scientists hope, this technique may enable doctors to see more precisely into the human body without having to perform surgery. Employing nonlinear materials to reveal images of obscured objects, assistant professor of electrical engineering Jason Fleischer and graduate student Dmitry Dylov have been able to resolve an obscured image into a clear pattern of numbers and lines. The process, they say, is akin to improving poor TV reception using the distorted, or "noisy," part of the broadcast signal. The ability to boost signals this way could potentially improve a broad range of signal technologies, including the sonograms doctors use to visualize fetuses. The scientists first passed a laser beam through a small piece of glass engraved with numbers and lines. The beam carried the image of the numbers and lines to a receiver connected to a video monitor, which displayed the pattern. They then placed a translucent piece of plastic similar to cellophane tape between the glass plate and the receiver, which scattered the laser light before it arrived at the receiver, making the visual signal so noisy that the number and line pattern became indecipherable on the monitor. Finally, the researchers placed strontium barium niobate (SBN), a nonlinear material that can alter the behavior of light, in the path of the laser beam. The SBN mixed different parts of the picture, allowing signal and noise to interact. By adjusting an electrical voltage across the piece of SBN, the researchers were able to tune in a clear image on the monitor. The SBN gathered the rays that had been scattered by the translucent plastic and used that energy to clarify the weak image of the lines and numbers. "We used noise to feed signals," Dylov remarks. "It's as if you took a picture of a person in the dark, and we made the person brighter and the background darker so you could see them. The contrast makes the person stand out." The researchers plan to use other signal processing techniques to further improve the clarity of the images they generate and to apply the concepts they have developed to biomedical imaging devices, including those that use sound and ultrasound instead of light. For more information on this technology, see "Engineers Turn Noise into Vision" by Chris Emery, published by Princeton's School of Engineering and Applied Science.
0 comments
Hide comments
Related