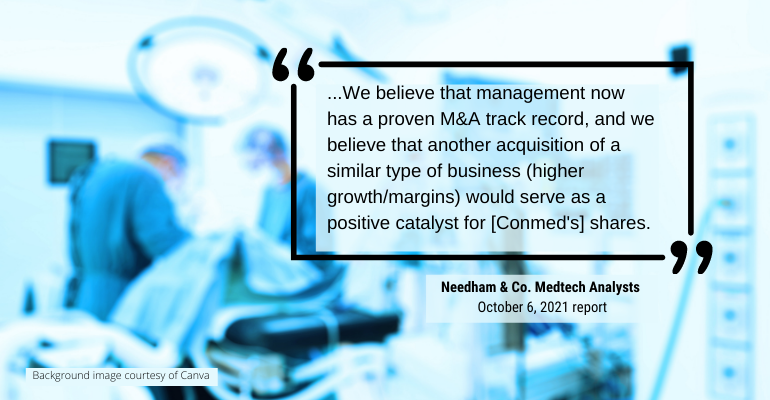 In recent weeks, Needham & Co.'s team of medtech analysts met with a series of investors across several regions of the United States. We previously shared their insights on AtriCure, Haemonetics, NuVasive, LivaNova, and Globus Medical. Conmed was also among the most frequently asked about companies during those conversations, according to a report from Needham's Mike Matson, David Saxon, and Joseph Conway.

At the time of the October 1 report, Needham had a hold recommendation on Conmed's stock, but the firm upgraded its recommendation to a buy on October 6.

One of the most attractive medtech M&A targets, Conmed develops surgical and patient monitoring products and services, and most recently the company has gained traction in the surgical smoke management space, thanks to two successful business moves. In January 2016 Conmed acquired SurgiQuest and inherited the AirSeal System, the first integrated access management technology for laparoscopic and robotic procedures. Then, in February 2019, the Utica, NY-based company acquired Buffalo Filter, which was considered a leader in surgical smoke evacuation technologies such as smoke evacuation pencils, smoke evacuators, and laparoscopic solutions. The AirSeal and Buffalo Filter products have since become the most significant growth drivers for Conmed, making up more than a quarter of the company's sales and growing at more than 20%, according to the Needham analysts.

The Buffalo Filter deal was particularly timely, given that in March 2019 Colorado became the second U.S. state (after Rhode Island) to pass a surgical smoke law to protect perioperative nurses and other surgical team members from the harmful effects of plume. The new law requires facilities to implement a policy that prevents human exposure to surgical smoke via the use of a surgical smoke evacuation system.

"We believe these products, along with an earlier than normal sales force expansion in mid-2021, should drive [Conmed's] revenue growth into the double-digits and its gross margin into the 60% range over the next few years," Needham's Matson wrote in an October 6 report.

"And Conmed has indicated that it could pursue additional acquisitions, which we believe could serve as catalysts, given the strong performance of its prior two deals," they said in the October 1 report.