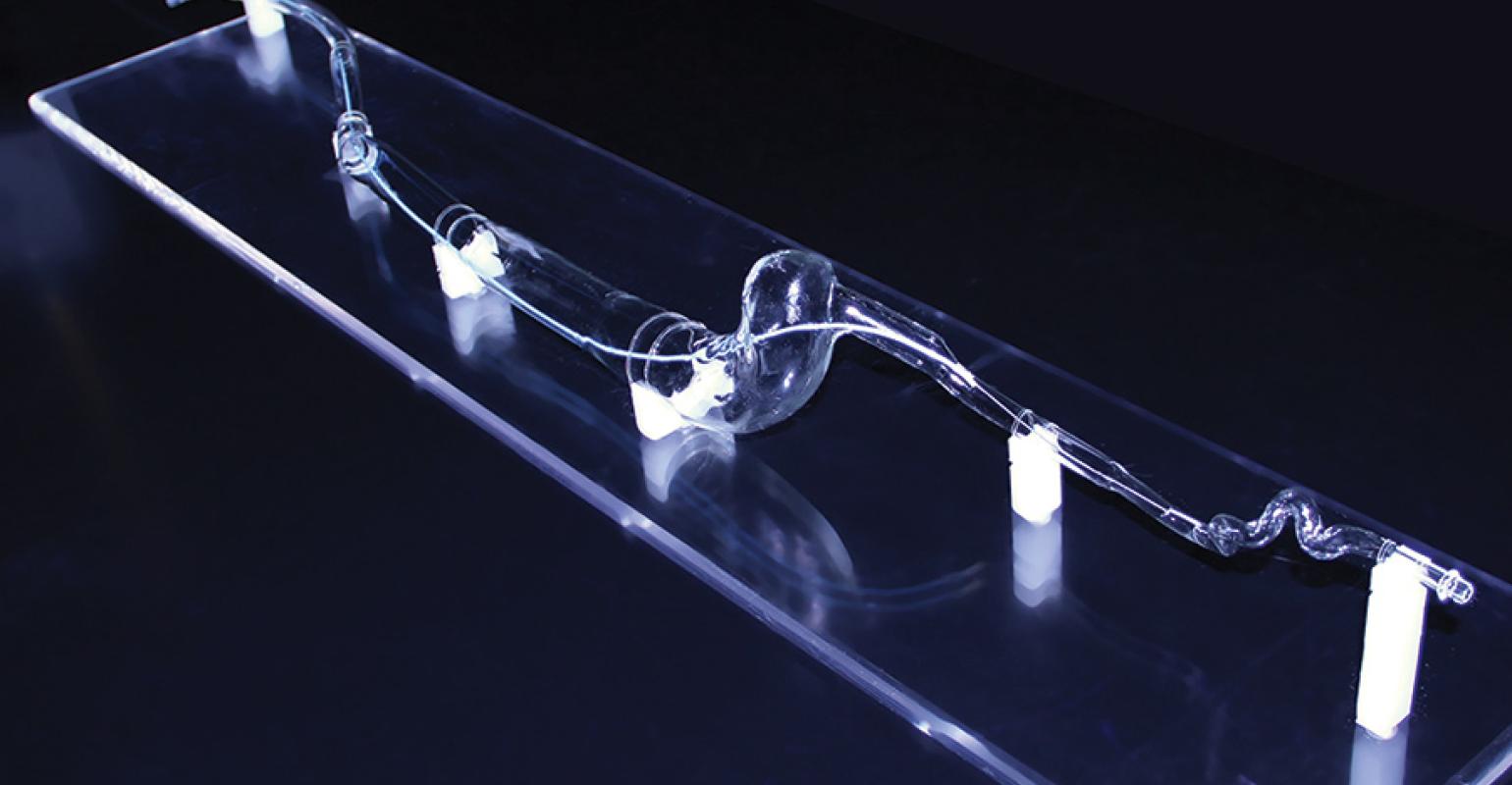 Hydrophilic coatings are unmatched in their ability to impart a high degree of lubricity to medical devices, and have made a significant contribution to vascular access and patient care.1

By reducing the force required to manipulate intravascular medical devices during vascular interventional procedures, hydrophilic coatings reduce risk of damage to blood vessel walls and prevent vasospasm.2, 3 Because they allow catheters to navigate tortuous vascular pathways and lesions inaccessible to uncoated devices, hydrophilic coatings have also expanded the range of treatment sites for procedures such as balloon catheter angioplasty, neurological interventions, lesion crossing, or site-delivered drug delivery, and have been shown to reduce thrombogenicity.1,4 Reduced friction between therapy and support catheters is also associated with improved outcomes, and reduced procedure time and cost.5

Hydrophilic coatings can decrease the frictional force between devices 10- to 100-fold.1But the properties that make hydrophilic coatings so lubricious--the ability to imbibe and exude water--have also made them susceptible to mechanical degradation, resulting in the generation of particulates.6 Hydrophilic coatings introduced in the 1990s--many of which are still used today--are a case in point. The durability of even historically best-in-class coatings could only be improved through an increased level of crosslinking, but this led to reduced water uptake, which reduced lubricity.

For manufacturers, the result was an unwelcome trade-off: to increase the lubricity of hydrophilic coatings, they had to accept a corresponding reduction in coating durability and higher coating particulate generation.

Over the past few years, new coating formulations have emerged that eliminate the need to choose between high lubricity and low particulate generation.7 But until recently these formulations could only be applied to medical devices through a two-coat application process, and many manufacturers are currently equipped only for single-coat processing. Fortunately, one-coat formulations are now available that substantially reduce particulate generation while maintaining the lubricity of previous best-in-class hydrophilic coatings (Figure 1). 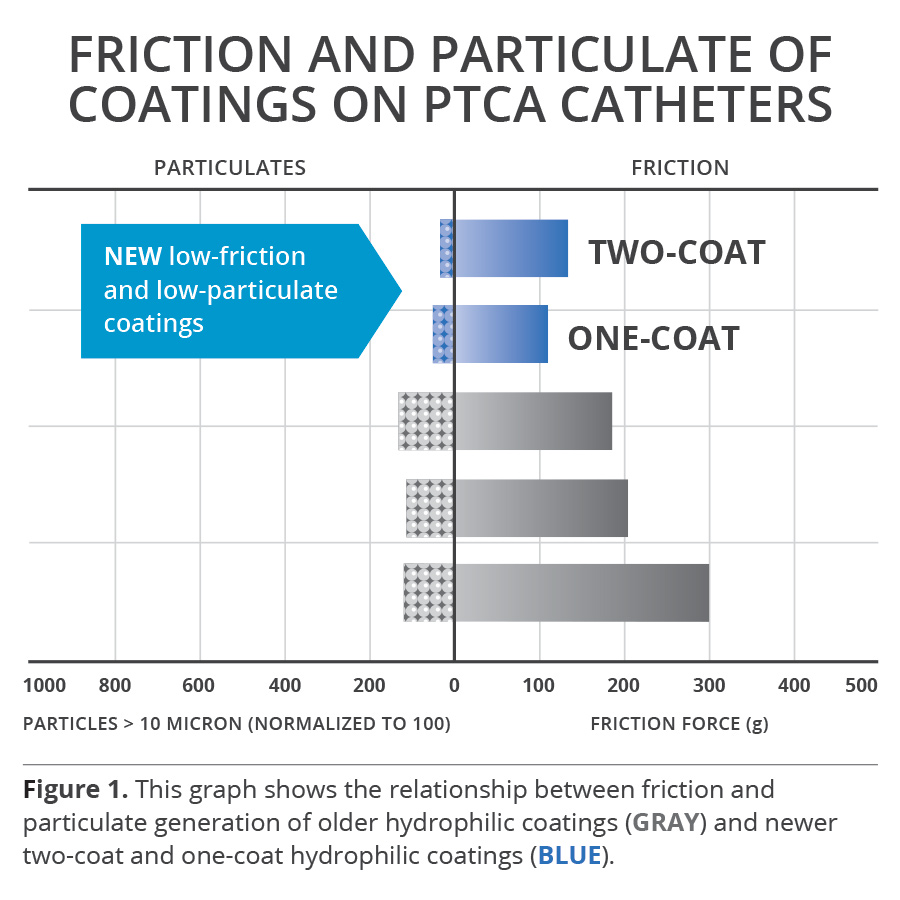 These recently developed coating formulations may also offer economic benefits to manufacturers. The efficient use of polymers and cross-linkers in these coatings means they can often deliver improved performance while substantially reducing the amount of coating material used in manufacturing. Not only can this cut supply costs, it can also reduce production time in comparison to previous single- and multi-coat UV- and thermal-based coating processes (Figure 2). When evaluating new coating options, device manufacturers should work with suppliers to understand the total cost of technology adoption, including capital expenditures and operating costs.

Two-coat formulations may remain optimal for neurovascular and other devices that require the lowest possible generation of particulates, since these formulations deliver the best high-lubricity/low-particulate performance now available.

Regulatory focus on particulates is not new. Because particulates in the vasculature raise concerns about downstream emboli, attention has long been paid to reducing particulates during procedures.8 There are several areas of focus. In addition to the chemical formulation of coatings, device design, materials, manufacturing, and clinical procedural technique can affect the amount and size of particulates generated. Since 2015, FDA has increased its attention to particulate generation on both the manufacturing and clinical fronts.

Citing recent clinical data on particulates, in April, 2015, CDRH sent medical device manufacturers a request for information to enhance the agency's understanding of the issue. Four months later, the agency followed up by issuing a communication to device manufacturers--"Critical to Quality (CtQ) Indicators: Hydrophilic Coated and Hydrophobic Coated Vascular and Neurological Devices"--which identified common features of coated devices that have the greatest impact on device safety and effectiveness, and how these features are typically controlled in design and manufacturing.9

In the wake of these communications, there has been an increase in FDA inspections directed toward manufacturing and quality control processes associated with coating.

The guidelines and standards used for evaluating coatings for medical devices have not changed since MDDI last reported on the issue.7 FDA recommends that manufacturers provide an interpretation of test data during device submission.12 Manufacturers remain responsible for developing an appropriate particulate evaluation procedure.

In their communications to industry, FDA acknowledges the important role of hydrophilic coatings on intravascular devices in providing physicians greater maneuverability and reduced vessel fiction as an alternative to more invasive procedures and their accompanying risks.

Coating technology is highly specialized, and arriving at the optimal coating for a medical device only begins with the initial chemical formulation. To best meet the needs of different medical devices, even the most advanced formulations may require refinements during the optimization phase, and continued testing and analysis of coated devices through verification and validation. These tests include chemical characterization, coating thickness via scanning electron microscope (SEM), visualization of coating uniformity, lubricity and durability using standard industry methods, and biocompatibility testing of individual components and device/coating combinations. Testing and analysis may continue throughout the lifecycle of the production.

For these reasons, medical device manufacturers need to establish a close partnership with their coating provider as far upstream as possible in the product design process, ideally beginning at the concept phase. Since the coating is often the only part of a medical device that comes into contact with the patient, it should never be an afterthought.

Hydrophilic coatings play a vital role in facilitating access and functionality for intravascular medical devices. However, in the past the properties that made hydrophilic coatings lubricious also made them more prone to generating particulates. This trade-off has been effectively eliminated in recent years with two-coat solutions, but a two-coat process was not ideal for many manufacturers. One-coat solutions are now available that maintain the lubricity of prior best-in-class solutions while significantly improving durability and reducing the generation of particulates. New single- and dual-coat solutions may also offer manufacturers economic benefits through a reduction of reagent costs and shortened production time. Increased FDA attention on medical device coatings has included Critical to Quality Indicators that can provide a useful framework for collaboration between coating providers and manufacturers. To achieve optimal results and expedite time to market, manufacturers should partner with coating providers from the earliest stages of product design.

7. Hergenrother, B. "The Evolution of Coatings for Endovascular Devices." Medical Device and Diagnostic Industry 35 (2013): 50-53

Sean Stucke is director of commercial development at Surmodics Inc. Reach him at sstucke@surmodics.com.

David Babcock is senior staff scientist for applied research at Surmodics Inc. Reach him at dbabcock@surmodics.com.